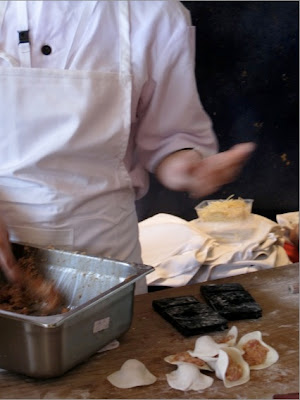 The lifespark of this blog has to be the very first dinner I had at Bentley Restaurant and Bar in Surry Hills. That one meal led to a full-blaze curiosity about this city’s food districts, as well as immense awe for Bentley’s co-owner/head chef Brent Savage, whose playful, inventive and insanely clever dishes are a mix of art gallery and sci-fi playground on a plate.

So I was excited to see he was on the World Chef Showcase bill, with his “idol”, the award-winning Spanish chef Sergi Arola, whose former rock star days explain his current ownership of 17 guitars (slightly dwarfing his tally of Michelin stars). On the day, Savage told the crowd he was “a little nervous” about sharing the stage with one of Ferran Adria’s most well-known disciples, and now a cutting-edge name in his own right.

Most of the showcase spotlight fell on Sergi Arola, who is not your average chef. Not just because of his highly contemporary, experimental way of of cooking, but because he has a seemingly equal love for music. He used to be in a band called Los Canguros (yes, ‘kangaroos’ in Spanish) and, as it would turn out, the Australian link didn’t stop resonating there. Sydney group The Church were a big influence on him; when he first heard Almost With You in 1983, he listened to it three days solid. 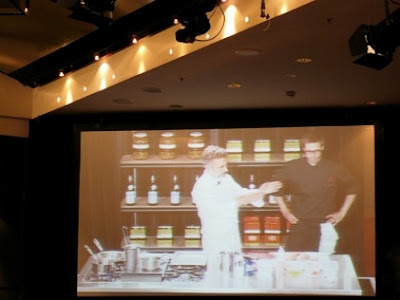 When Arola addressed the crowd, he apologised for his command of English. He only learnt the language through listening to songs, and “you know what happens when you do this”. Besides a few quirks (he had a cute way of pronouncing ‘recipe’ so it sounded like ‘receipt’), he was highly understandable and (like a lot of Europeans who downgrade their English skills, when they’re actually quite good) didn’t really didn’t need to apologise.

Music and cuisine are similar, he explained, they were just ways for him to translate emotion. A meal could be like a Clash protest song, for example.

To introduce us to his work, the chef sent us on a tour-via-slides of his current main restaurant, “very close to here, in the centre of Madrid”, he Dad-joked. Called Sergi Arola Gastro, it not only is the first non-French resto to land two Michelin stars in the year it opened, it is also a reaction to his time at La Broche, a celebrated fine diner that was slightly over-the-top. His wife, Sara Fort, told him, “I’m tired, I want to feel at home”, and so Arola’s current Gastro is “very normal” in comparison. The menu and decor are driven by the idea that “less is better” and he shuns designer cutlery for old-school Christofle knives and spoons that are “100 per cent ’80s, like me” (he comes across a lot cooler than that daggy decade though). 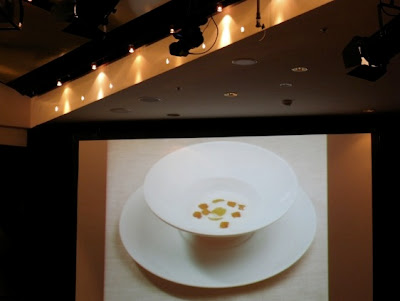 Image of a traditional Ajo Blanco

In the last 10-15 years, he says, chefs have become a little like “dictators”: “Ego makes us forget we’re a team”. Waiters, often overlooked, are actually the lifeline of any establishment because even the best food with bad service is a “disaster”; service is the “difference between a good restaurant and an exceptional restaurant”. His wife, who is also Gastro’s manager, “makes me remember [that] every morning.”

Another revelation for Arola was a simple one: when he read about all the legendary French chefs, he realised they all baked their own bread. And, after 12 years, it’s a “dream” – humble as it is – for him to make his own loaves on-site.

This turn-around hadn’t led to Arola becoming more solemn or less adventurous about food (in fact, I loved how his slideshow was spiked with good-humoured commentary –
“my sommelier is going to kill me!” he exclaimed about the photograph showing hams drying in the cellar).

The main topic of the chef’s demonstration was tapas. He started by slicing sashimi and fanning it quickly on a tiny dish. This was not tapas, he declared, even though it is often hastily rebranded as such. So often you ask for tapas and what you’re really served is a small plate. “Tapas is a way of life,” he explained. It’s what happens when you’re with friends, it comes in little portions and is very inviting. It’s placed at the centre of table and the most “important” part of it is actually the company and what you’re drinking. 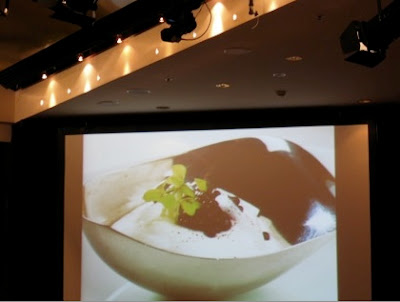 That’s not to say he was shy about remixing this Spanish tradition. His take on Ajo Blanco, a white version of gazpacho, with grapes, sardines and bread often added, is Ajo Blanco with Cherry Caviar and Asparagus. With Arola’s approach, he opts for a sophisticated texture instead – foam – which he creates with what journos and colleagues call the “devil machine”.

It’s funny, I can’t quite reconcile his high-maintenance way of cooking with his remark that “Life is so complicated, I prefer cuisine to be simple”. I think a Michelin-starred chef’s idea of simple is more ambitious than the average cook, who has half an hour to get something onto the dinner table after work, before tested appetites become full-tilt monstrous.

For instance, when he makes his pizza-like Coca with Foie Gras and Capsicum, one step involves caramelising onions for 24 hours, which would undoubtedly taste awesome – Arola says onions are 10% sugar, so once all water is reduced, the slices are dizzyingly sweet. But it’s not the most practical instruction to follow, and that doesn’t even involve use of blowtorches or Thermomixes (which come later). Once you accept this is the kitchen equivalent of a dream montage (rather than a practical cooking class), then it’s easier to swallow. 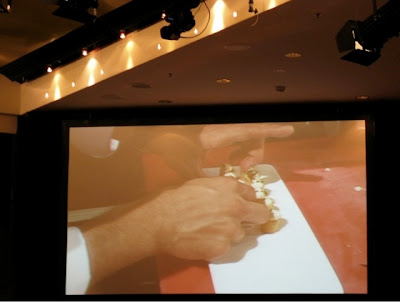 That said, Arola is so thoroughly likeable and good-guy-ish about everything. When he’s explaining which seafood ingredients he will not use for sustainability reasons (tuna, shark are on menu exile), he does it without at all sounding preachy or smug but as someone who’s just trying to be decent and respectful of how things are sourced. That he works with several NGOs on this issue seems less a CV-boast and more his commitment to making sure what lands on your plate wasn’t a bit-player in ecological devastation.

Also, it’s not hard to be won over by his imagination and liveliness. Arola’s reinvention of Patatas Bravas is my favourite of the day – he turns the overfamiliar dish into a bonbon. Yes, a bonbon. Using a “heartbreaker” (his name for an apple corer), he drills cylinders out of the potatoes – making cute sound effects as he does (p’chang! P’chang!). He tunnels in another hole in each starchy tube, bakes it on low heat before deep-frying, then pipes in chilli sauce and adds puffs of aioli on top. It’s his elegant and fantastical response to a very simple problem – how to get the right amount of sauce with Patatas Bravas (the dish’s downfall, in his mind). The result is not so much a bonbon as a little show of magic. 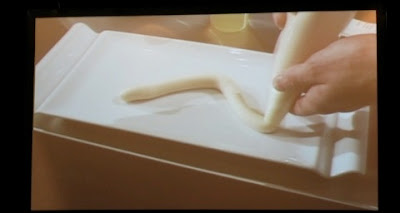 Matt Preston was the moderator for this session and admitted, “it’s a bit mean, isn’t it?”, making Brent Savage follow such an act. The chef agreed. “I haven’t got 17 guitars to talk about.”

The focus of his demonstration was Parmesan Custard Truffled Asparagus with Semolina Cracker, a “sophisticated cheese stick” for adults that is served at Bentley Restaurant and Bar. He said it was a good vegetarian option (one of Bentley’s high points is that is vego-friendly rather than vego-forgetful, as some high-end restaurants can be), and although it appears under the tapas menu in his establishment, “I’m a bit scared to use that word after what we’ve just gone through. So let’s just call it a small plate.”

The recipe involved a bit of tech-wizardry and at one point, Brent Savage suggested people buy a Thermomix for their kitchen.

One of the steps with the custard involved removing air from it, which the chef achieved by placing the wet parmesan mix in a vacuum machine, without a bag (the gadget is usually used for sealing food). It sucked out all the air in a one droney whoosh.

“How much is a vacuum machine? $5000? $10,000?” interjected Preston. The chef responded by agreeing with these supposedly accurate estimates of the tool. As an alternative, you can just pass the custard through a (much more cheaper) Tamis sieve, to knock out all the air. 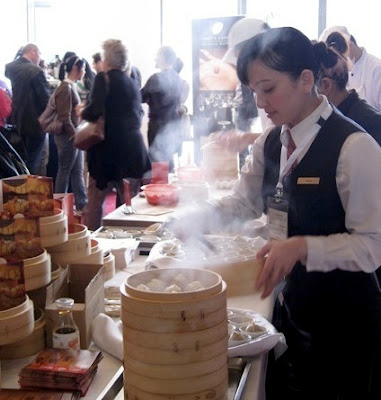 After this demo, Sergi Arola returned to the stage to take a few questions. As a highly experimental chef, he mounted a good defence of molecular gastronomy, a trend that lots of food critics like to use as a bulls-eye. The chef pointed out that using science has always been a part of cooking – “when you add salt to meat, it’s a chemical process” and when you place food in an oven or barbecue, physical transformations take place. The debate between molecular gastronomy and classic cooking is a silly one.

“It’s stupid to think, is the right one sophisticated or simple? If the guest enjoys the food, it doesn’t matter … if it comes from your mother, grandmother or a duck. Respect the guest,” Arola said. “Ego makes us forget that the only reason for opening the restaurant every morning is you.”