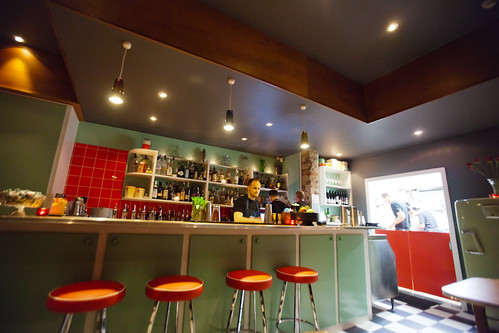 That’s Will’s take on Hinky Dinks, which has just opened opposite the fire station in Darlinghurst. The retro-charged design, by Luchetti Krelle, is so convincing that some patrons find themselves mentally propelled back into their grandparents’ home – although, back in the day, it’s highly unlikely your Nan ever served you a drink called Gypsy Blood or Corpse Reviver. 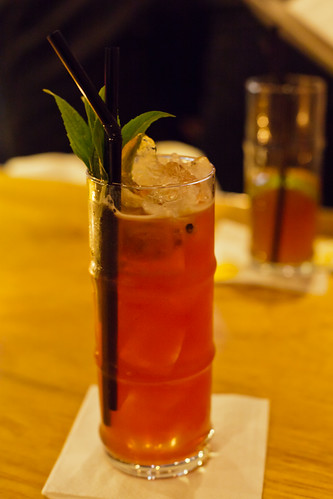 “Cocktails first, questions later” is one motto at Hinky Dinks and that is part of its fun. This place is run by two friends who met while working at Longrain: Jeremy Shipley (who you might see blitzing drinks behind the bar, when he’s not moonlighting as ambassador for Bacardi) and Dan Knight (one-time sommelier for Sake and The Cut Bar & Grill and ex-general manager for The Corner House – he’s the charmer with the smart haircut working the floor). Their likeable drinks menu ($15-$18 for single orders) gives you plenty of good reasons to work your way through your glass, from the sweet and zippy Gypsy Blood to the fruit-cup fun of Hinky Fizz (served with house-made strawberry and prosecco sorbet) and warning-label territory of the Zombie, a rum and absinthe concoction that’s so heavy-hitting, you’re only allowed a maximum of two a night (“Hinky’s rules!”). If you start to feel like the living dead after going there, don’t worry, you can always order the Corpse Reviver No. Blue to reverse the effect. And given that you could imagine grown-up versions of Betty and Veronica sitting at the Hinky Dinks bar, it seems apt that there’s a Frozen Bourbon Milk Sundae on the menu. 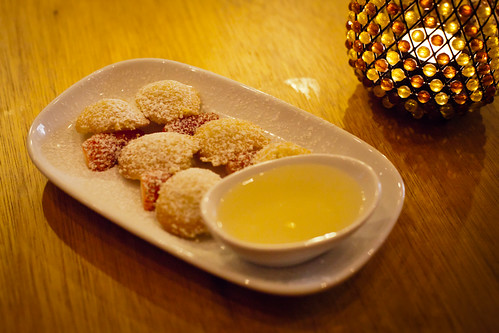 The mini candy-striped box of rosemary popcorn given to guests on arrival and the occasional tray of finger food that crowdsurfs the room adds to the “house party” feel of Hinky Dinks. Your appetite isn’t limited to those mini-bites though – the bar menu by Onde’s Laif Etournaud covers snacks (“peckish”), substantial plates (“hungry”) and sweet tooths (“indulgent”). The Pan-Fried Olive and Parmesan Sandwich ($9) is so very good – who knew that the simple combination of tapenade and cheese on toast could be such genius? Other orders we enjoyed: the Crisp Polenta with Roast Tomato and Salsa Verde ($20), Chicken Braised with White Wine, Tomatoes, Olives and Cavalo Nero ($22) and Crostini with Heirloom Tomatoes, Basil & Goat’s Cheese ($8) – yep, tomato is a tad over-represented on the menu, but I don’t mind at all. Just watch out for those cherry tomato halves that keep making a getaway everytime you try to wedge crostini into your mouth without causing clumsy ingredient spillage. After the guilty pleasure of the cheese toastie, the Roast Beetroot Salad ($14) felt like the nutritionally correct thing to order, and while the hazelnut, goat’s cheese and beetroot are a good, classic combination, am I the only one who finds watercress such a high-maintenance pain? When I see that overtangled green – it feels like a gardener needs to weed my plate. Maybe that’s just my vendetta against that out-of-control leaf. Everything else, though, was excellent (especially the fat, gold polenta chips). 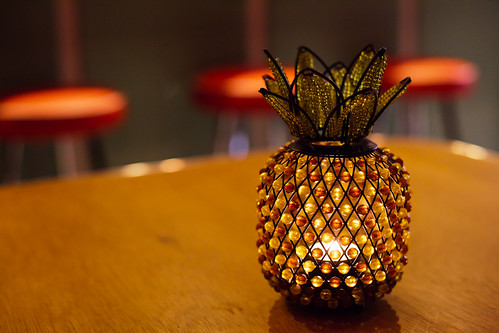 And I wonder what Proust would’ve thought of the Warm Madeleine ($10), made to order, placed snugly against strawberry slices and ready to dip in Tasmanian bootrytis riesling? Our opinion was pretty obvious from how quickly we cleared the plate (and Will’s quick-sip dispersal of the remaining riesling once there were no more sweets left to dunk).

This place is named after Michael ‘Hinky Dink’ Kenna, a crooked American politician who bought off the homeless with drinks at his bar, in return for securing their votes. Despite that history, this Sydney joint relies less on cynical electioneering and more on genuine charisma and appeal. The cute interior, with its supercharged pop colours, feels like an inviting hangout, and despite its period references, there’s nothing museum-like about it at all (in fact, the ’50s fridge in the corner still hums and keeps produce snap-cold). The retro graphics throughout, by Sydney designer, Hilbert Ho add to the sass and charm. This great bar covers all the vote-winning “issues” (fun drinks, table service, good menu, nice staff, appealing space) that should hopefully earn it a landslide victory with the public. It’s currently open from Wednesday-Sunday, 5pm-12am, but like any good “house party”, I wish it’d keep going even later than that.