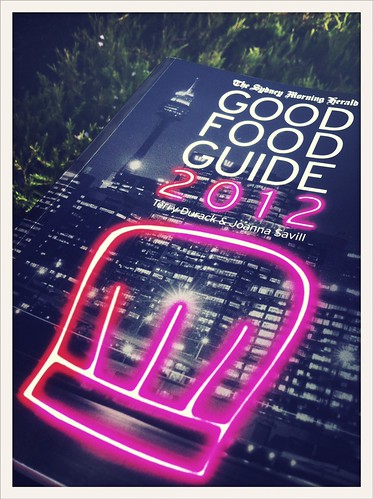 Sequels are meant to be disappointing, but my second year reviewing for Good Food Guide was infinitely more fun than any overlong Hollywood franchise. My “places to cover” list took me from Cabramatta to Palm Beach and I was even lucky enough to write up two restaurants that ended up in the hat-earning categories.

The awards took place last night and there were many genuine surprises (and zero thanking of God, though there was one 14/20 joke and one namedropping mention that David Chang was in the room). The big winners were Sepia (graduating to three hats and Restaurant of the Year) and Porteno (jumping in with two hats and Best New Restaurant). And, as if their charm and culinary smarts weren’t enough, unofficially, I thought Porteno’s crew also scored Best Dressed of the night, with everyone’s favourite hostess Sarah Doyle blitzing the stage in an awesome vintage-style, confectionery-striped outfit.

As the night went on, I found that almost every win would fork into one of two default reactions from me: “so glad that place did well!” (Porteno) or “I badly want to go there” (Sepia). I think that’s a good sign of who scored top honours.

I’m really happy that Duke Bistro, District Dining, Gastro Park, Biota Dining and Vini gained their first ever hats (especially Vini, which has been such a long-time favourite). It is also great to see lots of brilliant new eateries land in the Good Food Guide – The Dip, Orto Trading Co. and El Capo, just to name some of the staggering 78 additions. And there were lots of interesting category wins, from Favourite Breakfast for Three Blue Ducks to Favourite Vegetarian Menu for Bilson’s (how things have changed since that infamous incident where Tony Bilson “placated” a disappointed vego diner with a voucher to a buffet at Govinda’s). I did think 121BC would get Best Bar with Food, but that went to The Owl House (yes, another one to try).

Major kudos to editors Joanna Savill and Terry Durack, regional editor Barbara Sweeney and production editor Paul McLean (the one force in the world that makes sure we get our reviews in our time) for producing a great lifeline for anyone hungry in this town. Hope you enjoy rediscovering Sydney through the 900 entries in the Good Food Guide, as I will.