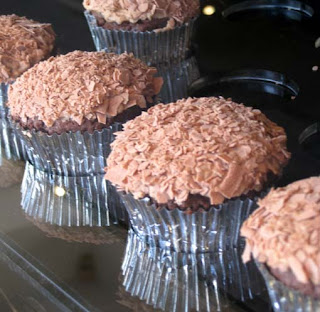 If you had to graph our reaction to Sparkle Cupcakery in Surry Hills, our initial response was all off-the-chart spikes. On a less mathematical note, I might even admit to some jumping and down and perhaps the odd (totally undignified) yelp.

After all, the display was crammed with colour-coded cupcakes and vivid ingredients listings to match: Pistachio and Cardamom, Lavender & Honey, Oriental Flower, Coconut Ice and more.

Once you’d slimmed down your choices, the staff placed your treats in lavish bags – the type you associate with luxury goods and dream-on shopping sprees.

And if you were served by a particularly nice member of staff, you got to pick your bag-sealing sticker from the “wheels of colour” – handy if you had a clutch of purchases and needed an efficient (and pretty) tag to jog your memory as to which bag to hoe into and which one you were saving for your friend. 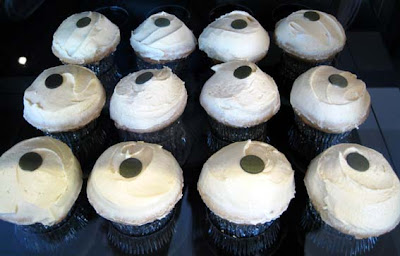 Then you walked out all keyed up with cupcake anticipation. It just HAD to be amazing to eat. After all, how could a Green Tea & Bubbles cupcake “filled with tapioca bubbles and lime frosting” be disappointing? Surely, this “cupcakery” had to be great if they churned out sweets like “lychee and rose cake with sweet rose petal topping”?

Well, our expectations thudded down to ass-bruising earth.

We thought we’d be in swoony cupcake heaven and the reality just wasn’t so rose-petal-coloured.

I wanted to like Sparkle’s cupcakes so much, but as the girls in Advertising in our office said the other day, “I can’t believe I spent $4.50 on this cupcake and it’s so dry!”.

The slightly Sahara-esque texture and moisture content wasn’t the only letdown. The cupcake flavours seem extremely low-key (sometimes even quite hard to sleuth out). The green tea was one such example and instead of making me want more, it only reminded me of much I love the Green Tea, Lemon Myrtle and White Chocolate muffins at Cafe Ish.

I tried my friend’s Coconut Ice, but the only discernible taste was of the coconut shreds on top – none of the cake actually registered. Her Oriental Flower variety exhibited some flavour, but sadly it just tasted like essential oils to me. Biting into the Pistachio and Cardamom offering, I got a little over-excited because an actual ingredient came to the fore – but cardamom has such a strong taste that it could break through even the blandest recipe. Being able to play spot-the-ingredient isn’t quite the same as enjoying the harmonious flavours at play in something well-baked.

All the PR about the cupcakes sounds good – the company claim to use high-grade ingredients, cracking free range eggs and mixing creamy butter and melting Belgian chocolate into their batches. Everything is fresh-baked. But from what we tried, this impressive claim didn’t live up to what we tasted. We wanted to really like their treats so much that my friend even wrote a really supportive email to Sparkle, telling them how much she liked the display and packaging and staff and store, but that the cupcakes she tried were unfortunately somewhat dry.

It’s so easy to just dismiss a place if you’re disappointed with what you try, but she thought this feedback might help them meet the grand potential they’d set up for themselves.

Sparkle wrote back with a slightly strange reply, asking her if she had bought the cakes on the day she sent them feedback about it tasting too dry. (Are people being too hasty by ONLY waiting three weeks to eat their cupcakes and then wondering why they don’t taste so flash?) Of course, my friend had bought them only hours beforehand. It was nice of them to reply, but the tone was slightly dismissive. They didn’t even trouble themselves with a blandly polite “we’ll take on your feedback to make improvements” comment.

Still, I thought I should give them another try before making up my mind outright. Just to be fair.

So I trekked again only a few days ago. I ordered the Espresso and Milk Chocolate varieties. Yes, the bag looked very luxe, but I noticed the sticker kept coming off, so it had a swish appearance but didn’t even seal properly. I took the cakes to work and sliced them up, conducting some office research. The coffee icing on the Espresso has a recognisable flavour but the actual cake disappears into barely-there territory once you bite into it. It still tastes dry – not just according to me, but the other guinea pigs who were part of my sample survey, which included the ex-editor of a monthly food magazine! 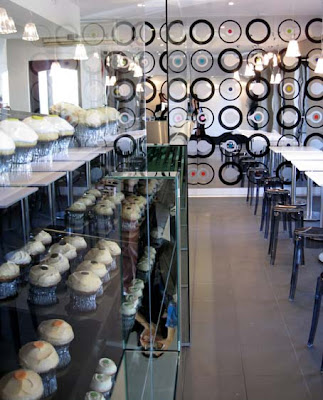 The milk chocolate (described as having “moist Belgian chocolate” on Sparkle’s flavour card) didn’t suffer from such a parched taste – and of the 10 flavours knocked off between all of us (and $50 later!), it’s the one that fares the best. But that’s not a particularly heady scale to be measuring from. As I passed samples around the office, the verdict seemed to be the chocolate was OK, but not amazing. The glitter was wearing off from our initial pro-Sparkle feelings.

If I had to graph how we were feeling now about the place, the X-Y co-ordinates would be sloping downhill, that’s for sure. It’s a shame, because on paper, this new cupcakery seemed to add up to something exciting. Maybe once the dry spell breaks, a later revisit will justify our original cheerleading for Sparkle.