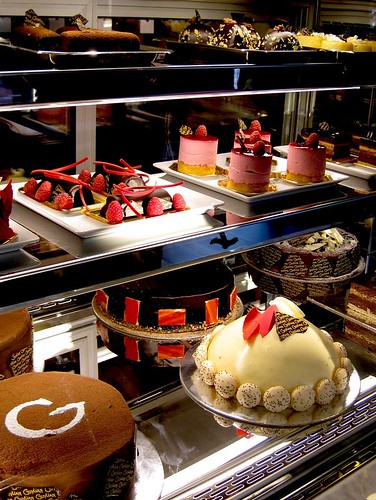 OK, in the book of food blog sins, I have to admit to having never been to the Lindt Chocolate Cafe in Sydney. (It’s on my list, really!)

But I haven’t been so slowcoach when it comes to its new rival joint – tonight, I was given a hand-me-down invite (the only kind I receive!) for the opening to the “new” Guylian Belgian Chocolate Cafe in Circular Quay. (“New” = actually been open for a little while, but don’t let that get in the way of a red carpet and some finger food circulation.) 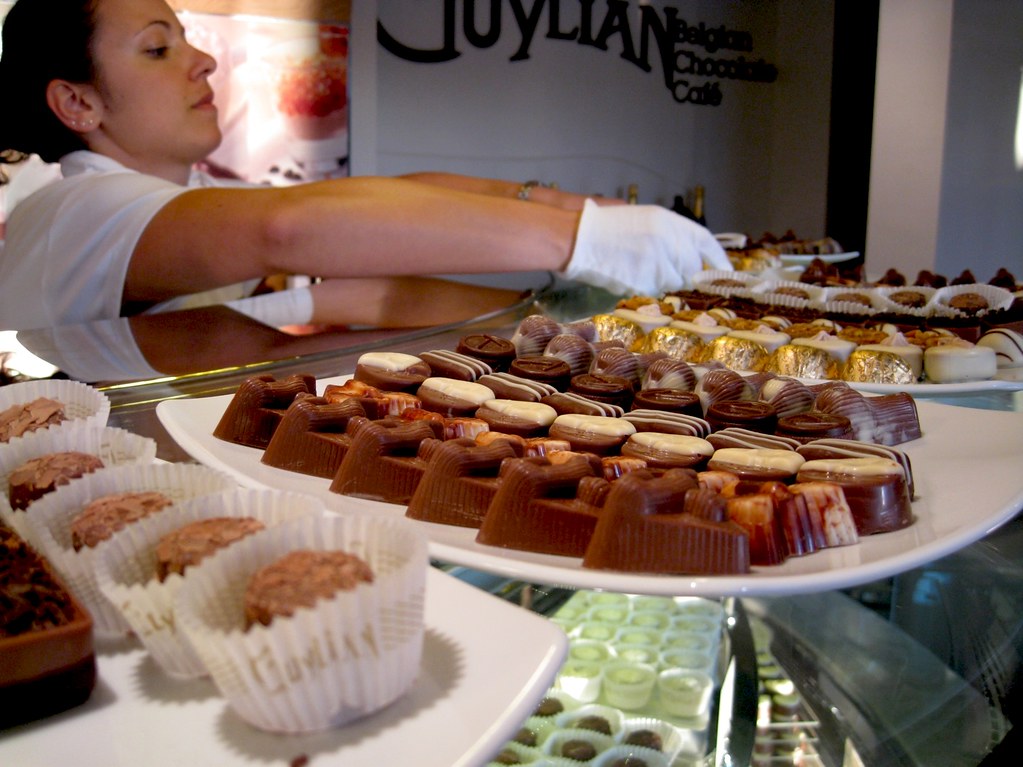 There were endless chocolate samples for us to try – as soon as you scooped up a few, the dishes kept re-filling with fresh pralines and truffles – like some kid’s dream sequence on constant repeat.

On heavy rotation was the Guylian “Opus” range of chocolates, which includes “Wagner”, the dark chocolate brownie (much easier to stomach than the composer’s souring politics); “Massenet”, a white chocolate dome with a stowaway centre of chocolate mousse and “Puccini”, cleverly shaped like a butterfly (nice opera in-joke, chocolatiers!) and filled with orange cream.

Chris’s favourite was the “Donizetti”, a drum-shaped hazelnut praline encasing a whole hazelnut. Mine was the “Mozart”, a smoky cappucino-flavoured chocolate that had a little staccato burst of roasted hazelnut.

Of course, Guylian’s trademark cocoa shells and seahorses were everywhere, all exquisitely beached on pretty displays inside the chocolate boutique. For the launch, bartenders channelled Cocktail and Willy Wonka and The Chocolate Factory by emptying large seahorse-shaped bottles of hot choc liqueur into martini glasses, adding other alcoholic splashes for the B-listers and no-listers jostling for drinks.

It was weird being at a event where there’s one or two genuinely famous faces and then many more people who are quite a plummet below the A-list. There are obvious nobodies – like us – and then there are people who seem nano-recognisable. As the social photographers snapped away for the newspapers, we struggled to really work out who anyone was – I had a moment where I thought I had a semi-celeb figured out, then I realised they were someone I once served when I used to work in my dad’s corner store.

As we stalked the circulating trays of finger food, I thought there should be an equivalent to Shazam (the iPhone application that can identify almost any song it’s played), where instead you have a program pointing out all the not-quite-celebs in a room that you’re too pop-trash-illiterate to know. That’d leave you feeling less stumped.

Back to the chocolate, of course… I didn’t get to try any more (hogging out on sweets is a fast race to queasiness) but the display case of haute-couture-like pastries and cakes looked worth future investigating. I do have mixed feelings about chocolate cafes though – they seem awesome in principle, but don’t always hit the mark (I’m not a fan of the Max Brenner cafe, where the menu seems to use sugar as tastebud muzak – I hope Guylian aren’t as flavour-lazy.)

Also, as a Lindt fanatic (who once rang their headquarters to make sure they weren’t phasing out their Coffee Intense flavour), I wonder if Guylian can match the popularity of that Swiss brand’s chocolate salons. The turf war between Sydney’s Euro-choc barons is now on.

One thing I know for sure, that “Mozart” chocolate is like a song I can’t get out of my head. Encore please.