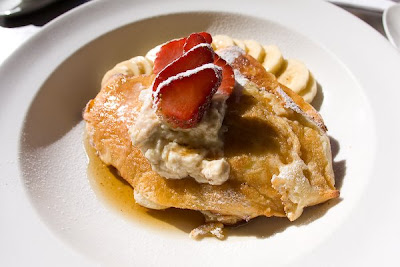 “Can you write on your blog about ‘bressert’?” asked Chris. “You know, ‘breakfast dessert’?”

I admit, the phrase sounds eerily similar to a form of ladies underwear often seen in frat-boy comedies, but I am pro-bressert. I like the idea of the breakfast food pyramid being dismantled, gutted and rebuilt with a few secret hideaway slots for things less saintly than bran or eggs. After all, who wouldn’t like a sweet outro to round out their first meal o’ the day?

So when Chris mentioned his stomach-directed attempt to get into the Macquarie Dictionary with the coining of this term, of course we had to respond with some sugar-dusted support. We went thirds on a serving of the Coconut Hotcakes with Bananas, Cinnamon Ricotta and Maple Syrup at A Little On The Side in Darlington.

The trick with bressert though, is forward planning. We asked for so much food that the waiter (who surely has seen his share of table-overwhelmed orders) asked if all of it was just for us. And then the hotcakes arrived before anything else anyway – like some kind of annoyingly fable-like test of patience. We just eyed it and exerted no-fun restraint until our savoury dishes arrived and were speedily eaten up. Bressert was worth it though.

Last week, Will and I thought about getting bressert at Vargabar (which IS open on Sundays, hurrah). The Blueberry Pancakes with Orange Passion Butter was on the cards. Except, having made a case for eating breakfast dessert, we actually forgot to make room for it. We’d hogged out on eggs, toast and the lot that nothing else was going to make the cut – sweet as it was. Maybe there needs to be a new word coined for that. Or maybe there already is – greedy-guts.

Tags: A Little On The Side, breakfast, Darlington, dessert, Newtown, Vargabar