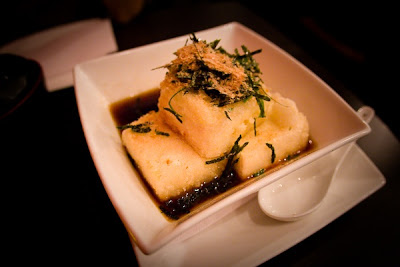 I have a theory that it only takes one dish to make you want to visit a new place. Menu-bait, to be precise.

At Bonsai in Bronte, the must-try temptation that reeled me in was their Mandarin Creme Brulee ($12). I didn’t really have to see what else they had to offer, that was enough to make any table attendance worthwhile.

Of course, like a movie that has to work its way through necessary subplots, we had to try a few other things en route to dessert. The Agedashi Tofu ($12) was lovely – sweet, crumbly and a silken-landslide when you spoon into it. Bonsai’s Stir-Fried Udon Noodles with Tofu, Mushroom and Snowpeas ($17) had some nice bracing flourishes – the tart pickled ginger shreds, the fact the dish wasn’t pinned down by glugginess but a light-handed touch (and the unruly tumbleweed of bonito flakes on top allowed for some visual amusement). Steamed Green Beans with Goma Miso ($8) were a subtle side dish – adding a little snap and freshness to our plates, and some low-key miso sweetness too. 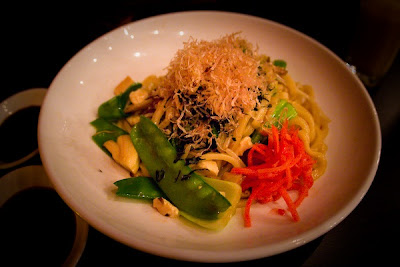 Sure, the prices aren’t bargain-basement (miso soup for $4 and edamame for $6 will seem steep compared to the price spectrum of a ramen joint), but the beachside site of Bonsai will mostly explain that away. Also, the service seemed to be variable depending on the waiter lottery – one forgot our drinks order and despite some reminders, never brought out the water we asked for. Another had an eccentric sense of humour, but at least was friendly and remembered to keep us hydrated and fed.

So – mandarin creme brulee! Despite tunneling through all my dishes so I could get to this point, I was nearly appetite-spent by the time the dessert menu was handed out again. I did have enough energy to be pesky and high-maintenance to indulge in ingredient substitution. I know, I know, it makes chefs totally grumpy and I can understand why. So I heaped on the grovelling and tried to justify it – plus it only involved switching the Chestnut Ice Cream that comes with the creme brulee and replacing it with the more alluring-sounding White Sesame Ice Cream (which forms part of the Apple & Sultana Strudel and Butterscotch Sauce package deal). Luckily, the waiter was nice and accommodating about swapping the scoops. 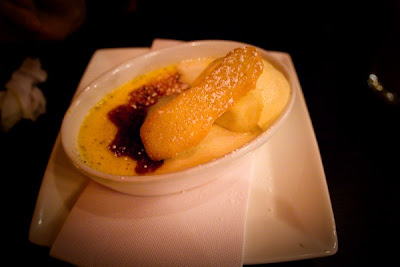 The rule-twisting was worth it because the white sesame ice cream was an understated surprise – its hints of sweetness reminding me of childhood Chinese New Years spent eating sesame snaps. A little toasty, and highly dessert-compatible, I think it steamrolls over its black sesame counterpart (a staple on many Asian menus, but sadly it can often taste like frozen coal).

The mandarin added a citric kick to the custard, making the brulee deserved of its menu-bait status. Tragically, I only got so far before needing to be forklifted out of the restaurant for overeating. All this accelerated stomach expansion, of course, seems ironic behaviour for a diner in a restaurant named after beautifully clipped and refined miniature trees that barely interfere with the space around them.