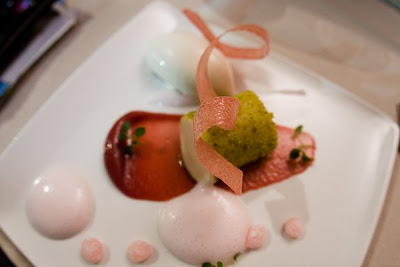 Eating birthday cake is nice, but having four-course dessert ($35) is taking it to the next candle-blowing level.

With Bentley restaurant in Surry Hills offering a quadruple-scoop of such sweets on their menu, that’s how we ended up celebrating Will’s birthday. 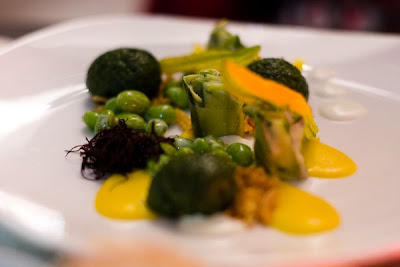 First, we got the support-act savoury dishes out of the way – nibbling small treats so as not to blow our appetites too early. I had the always-amazing Gazpacho 3 Ways ($11), three colour-themed glasses that instantly blitzed my tastebuds. It was a lottery of fresh, zippy flavours: from the slight tang of the creamy almond milk to the livewire tomato & capsicum to the breezy cucumber drops.

I also had the Basil Pudding with Sweetcorn Puree and Asparagus ($18), which was a mini-installation of green-and-gold vegetables, a palette that’s a little flag-wavingly patriotic or reminiscent of Van Gogh’s Sunflowers, depending on how much you like to over-analyse colour schemes. I’ve gotta say though, it was more memorable on the eye than the other senses. No matter, we were gearing up for dessert. Dessert Contestant #1 was the Warm White Chocolate and Passionfruit Ball with Citrus Salad. Can you go wrong with that star ingredients list? Sure, white chocolate can be screamingly sweet and “OTT”, but in small flakey doses and restrained by the tart fruit dollops, it was exhibiting model behaviour. Fun to eat, and a surprise with each spoonful, this “ball” definitely was a goal-scorer.

(PS. Don’t be freaked out by my Joker-esque appearance in the glass!) 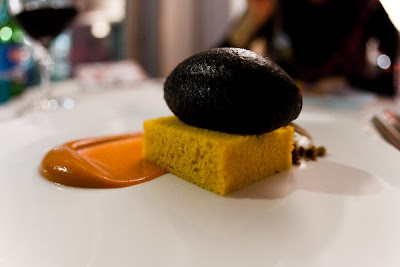 The dessert menu seemed to be operating on the mix-tape principle – open with a grand attention-pleaser, then slink into weird-genre territory.

So next up was the Black Olive Sorbet with Carrot Cake and Coffee Crunch (which you can get on the normal dessert menu for $16). Sure, the idea of olive-flavoured sorbet is bound to freak a few tastebuds out, but I admit, I like it – in the same way I like some alienating music or weird TV shows or hard-to-explain art. I know not everyone’s going to dig it and disliking it is not some kind of failure – in fact, it’s totally valid and understandable (Will wasn’t so into it, judging from his nose-screwing expression). What I like about the sorbet is its disarming sweetness that reminds you of how much olives burst with contradicting flavours, all fighting for attention in one big salty-sweet-tangy smackdown.

That said, you only need half as much sorbet to make the point – and once it all melts, it resembles one big Exxon Valdez oil slick on your plate.

The Coffee Crunch was the dessert-saver here, its caffeinated grit was all ground-up goodness (with none of the wound-up jitters of its liquid equivalent – the one that powers office meetings and keeps poor work experience kids stumbling out of cafes with Jenga-like trays of takeaway cups).

There was also a bonus burst of orange blossom jelly – a little gelatinous surprise that played into Bentley’s favourite game of texture mix-and-match. 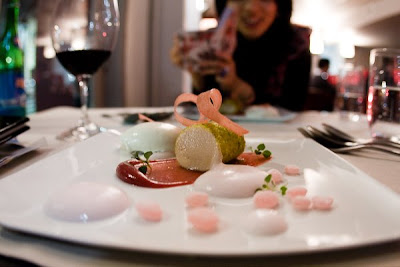 Like a mix tape, the dessert menu swung back from experimental boundary-testing territory to pure pop bliss. The third course was Rhubarb Custard with Tonka Bean Ice Cream. The custard was rolled in hazelnut praline and partly smeared with rhubarb puree. The fact it was crowned with a pretty-in-pink corkscrew just lifted the whole dish into that extra level of delightfulness. Scattered around the plate were Turkish Delight pebbles – which were dreamy to look at, and dreamier still to eat. This dessert was geared to bring out the bounding, over-excited inner kid in everyone. Especially when you discovered there were more multi-coloured candied pebbles hidden in the ice cream – it fast became a quick-to-be-unburied treasure.

So after all the fun and games of the third dish, the grand finale felt more grown-up and serious. Sure, the White Chocolate with Mandarin Ice Cream and Fizz has a sherbet-like buzz, but it’s a dessert that’s about sophistication galore. A watchtower of white chocolate stands over a patch of choc-grit and zesty ice cream. It’s brilliant – but I’ve had it in two similar incarnations at Bentley before, so it’s like discovering a song you already know on a mix tape your friend has made for you. You can understand why they made that pick – but it doesn’t have the surprise of something totally foreign and jolting.

Which, of course, is why I didn’t just stop at the Four Course Dessert Menu ($35), but had to indulge on one last extra thing – the Toasted Banana Marshmallow and Warm Banana Milk ($6). 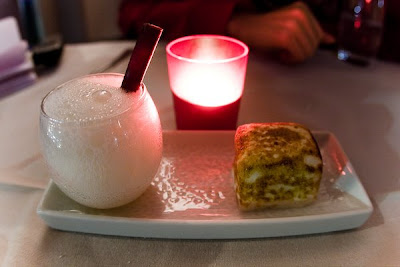 After all, there’s nothing like a birthday to give you licence to completely spoil yourself (even though it wasn’t me who was counting candles on the night!). The banana milk was nothing like the powdery instant drinks you churned out after school while watching cartoons. It was a glass full of milk bubbles – so drinking from it led to a satisfying gurgle as you hoovered the chocolate straw over every last ‘drop’. For something so airy, each bubble was impossibly ripe with banana flavour – and sucking the whole thing up was like some fun experiment from The Curiosity Show.

And the marshmallow didn’t need much explaining at all, but boy, it was good. A toasty, perfect moment to cap off a rather kid-like night of adventurous desserts at one of my favourite restaurants.

It wasn’t even my birthday, but with food that dazzled the eye like prettily-wrapped gifts (that happened to be as rewarding as real presents), it sure felt like I had something to celebrate.