The scoop on Gelato Messina 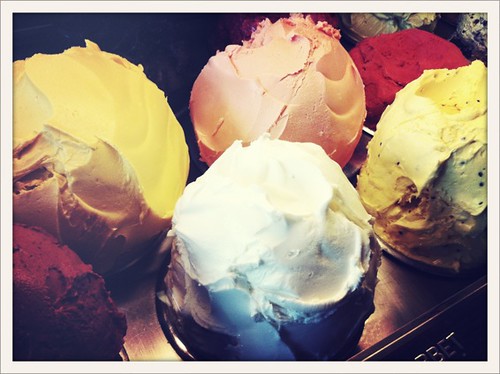 How did Gelato Messina begin?
Over two decades ago in Adelaide, Nick Palumbo came up with his first gelato flavour: coconut and lychee gelato. “That combination exists in a lot of restaurants now, but back then that was cutting-edge. No one had an idea of what lychee was 20-odd years ago.” He later moved to Sydney, and switched from working in restaurants to serving creations in cones – starting with the coconut and lychee blend. “When we opened up Messina [nine years ago], that was our signature flavour and it still, to this day, is one of our better sellers.”

Who comes up with the ideas for the flavours?
“It used to be all me,” says Nick, “but in the last year or two, we’ve taken on a chef partner, Donato Toce [who used to be head chef at A Tavola, which Nick used to co-own until recently]. We discuss everything and come up with the formulas together.” Donato’s first creation was the insanely popular Pavlova, which mixes chunks of meringue with vanilla Chantilly cream and swirls of raspberry and passionfruit coulis and attracts endless “please bring it back!” requests from Messina customers the moment it’s no longer in the freezer cabinet. 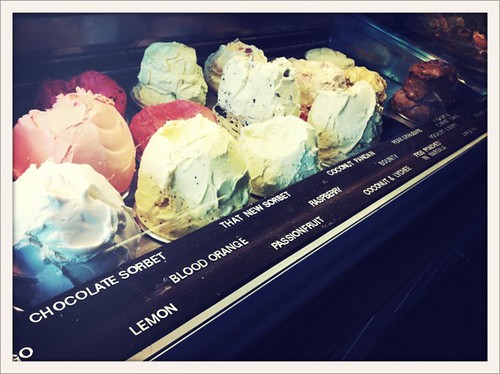 How often does Messina come up with flavours?
“We go in rolls. At the moment, we’re flying out two-three new flavours every week. But that maybe lasts for three weeks on a trot and that slows down, because what happens is that some flavours aren’t as successful as others and the ones that are, people come back and want them and they get re-introduced. We have an ice cream called Elvis The Fat Years, which was renamed temporarily to Christian Skinny Jeans.” This was in honour of a frequent customer (Christian Lo Russo, the lead singer of Amy Meredith) who got his fan base to blitz Gelato Messina with more than 200 requests for Elvis The Fat Years to make a return to the building.

What’s the story with The Boy In Balmain?
It’s named after Adriano Zumbo, who used to work at Messina and is famous for his Balmain patisserie and its permanently long queues. Each scoop is studded through with macarons. Although it’s been fun to “pay out” Zumbo with a dessert named after him, “it’s very difficult to get a macaron to stay crunchy in a frozen temperature where it’s surrounded by moisture,” says Nick. “The first time, we made macarons the traditional way; after a day, they absorbed all the moisture in the gelato. We had to redo the recipe. How do you get desserts to work and how do you make them perform in a minus temperature environment? Getting the macarons to stay crunchy was a challenge.” 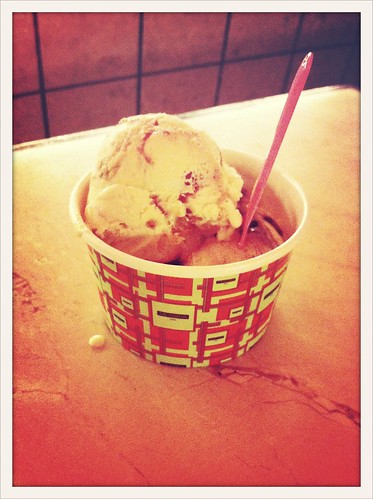 Are there any flavour successes that have been surprising?
“Donato came up with sage and burnt butter. We thought it was pretty out there, but it sold really well,” says Nick.

“We’ve discovered that peanut on its own, it doesn’t sell, it’s not exciting – but the minute you start doing something to it, it starts going crazy. Like Elvis The Fat Years [peanut butter, banana jam and fried brioche], Chop Star [coconut and peanut]; the peanut and gingerbread. These things happen by accident, we just sit there and try different flavour combinations together.”

Have there been any flavour failures?
“We generally get caught out on the more polarising flavours – the savoury kind, like the tomato sorbet. It’s good to push the boundaries but sometimes something will taste nice, and we all get excited, but the mistake we make is that you need to experience it as a consumer, as a whole scoop. Some of those flavours … one spoon, you think, that’s pretty exciting, that’s pretty nice, but you won’t eat a whole scoop of it. So we’re lucky, it hasn’t happened that often. The tomato sorbet was probably, in recent times, the biggest disaster – from a customer perspective. It just didn’t go. We made it, and we knew it would be 50/50. It was kind of good that it flopped, because it gave us a dose of reality, you can get a little bit too weird.”

What was tricky about making the Risotto Milanese gelato?
The easy part is making the creamed rice with milk, sugar, honey and cinnamon. “But what happens to that grain of rice when it’s at minus 12? No matter how soft it is on your palate at room temperature, the minute it’s at minus 12, it goes hard like a stone. So again, we had to adapt the way we cooked the rice, so that when it was in the cabinet, it was still firm but you weren’t biting into rocks.” 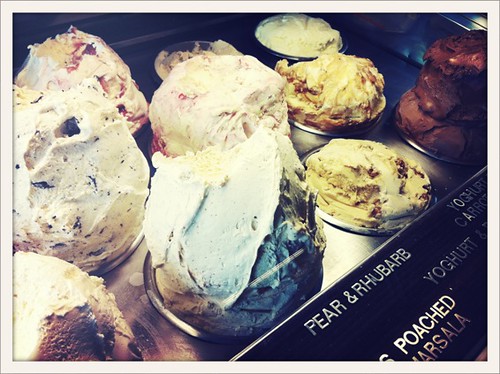 Have there been any ideas that have been off-limits for Gelato Messina?
“I was asked by someone from the Sydney Morning Herald back in January about breast milk gelato, because a guy [overseas] was doing it. Apparently it’s all got these health benefits. But I wouldn’t consider it,” says Nick. “I don’t know 15 women that could give me breast milk. [Laughs] The complication is that each portion of milk has to get individually tested for bacteria, possible diseases. It’s complex, but like anything, it’s a marketing thing.”

Are there any flavours that are too adventurous for you to make?
“We like being way out, but when we mean way out, it’s stuff that’s edible and that people would like.” Customers do ask about far-out flavours, like Parmesan gelato, but are not personally interested in buying them. “They’re just prodding to see how far they can push us to do things. We can do all those sorts of things, and we have in the past, but we’ve made them more for personal reasons or because a chef has asked us to do a certain dish and needs a component, but it makes sense, because he’s only serving that much, and it’s one fifteenth of a dish. It’s an accompaniment, it’s not a stand-alone flavour.” 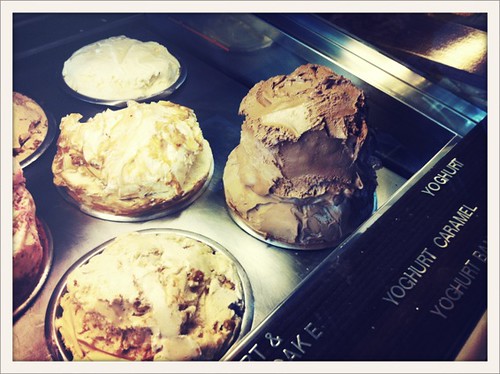 Does the Messina team experience many weird flavours?
“I haven’t tried a lot of weird flavours, to be honest,” says Nick. “I know that when people say weird, they mean savoury. And it’s quite sad because there are so many things you can do. To push the boundaries, you don’t have to always do a basil sorbet, parmesan and bread or Vegemite. We come from a chef’s background, we’ve been in restaurants all our lives. This is not a game that we got into because we were tired with our office jobs or tired from being electricians or plumbers and thought, ‘you know what, I’m going to open an ice cream shop’. This is what we evolved into, from a chef and restaurant background. So when we think of flavours, we think of flavours in that respect. We think of a palate, mouthfeel, of how sweet it is. It’s been a balance to get the sweetness right. You need sugar in gelato, otherwise it goes rock hard. And to get a gelato that doesn’t require half a litre of water once you finish eating, it is hard because you need to find other ways of getting the same effect, without the sweetness. It’s taken a long time to get to this point.” 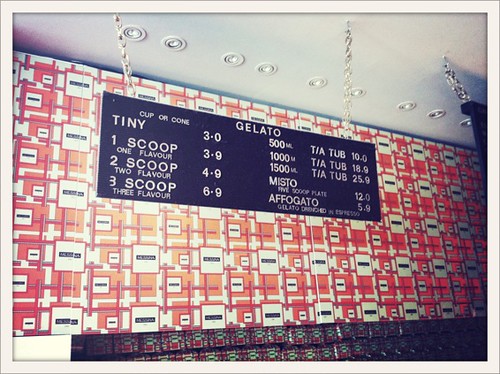 Besides the original flavours, what else makes Messina different to other places?
“In 90% of gelaterias around the world, this is what happens. Fill with white base, blend with X amount of paste, push a button on a machine, bang – you got gelato.”

“We make everything from scratch. We don’t use any pastes.” (Banana paste, in particular, is “shocking”, which is why banana gelato often is disgusting and tastes like a chemically warped version of the fruit.) At Messina, “you’ll see herbs, spices, cocoa powder, almonds that we blend ourselves, pistachios that we make into paste.”

“Every single flavour we make – because it’s using natural stuff – has its own individual recipe.” Each one is a balancing act between ingredients. For a hazelnut paste, the fat in the nuts means less cream is needed, but the heavy, solid content requires more sugar – “to make it creamier and scoopable in the cabinet. It’s very labour-intensive”. 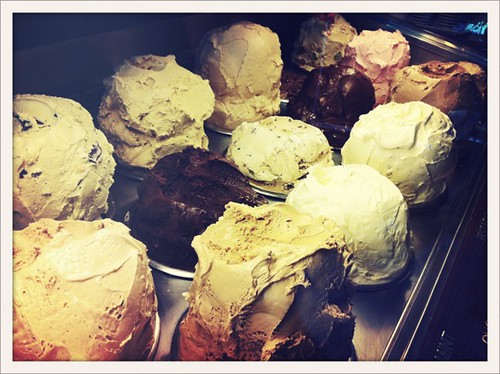 What’s next for Gelato Messina?
Next door will become a part lab, part gelato patisserie. You’ll be able to buy mini desserts, biscuits, cannoli, ice-cream sandwiches, Magnum-style gelato and, provided you put in an order online in advance, “there’s going to be a mechanism for you to design and construct your own ice cream cake”, says Nick. “There’ll be four shapes to choose from, 30 flavours that you can put it into those shapes, and there’ll be two styles of finishing, either a ganache or a chocolate velvet spray.” (This sounds amazing! I think it’s pretty much guaranteed that my next 10 birthday cakes will now be courtesy of my computer and the Messina freezer.)

“So we should be all ready to go right in the middle of winter! But it’ll be good because it’ll be a slow start and help us.” 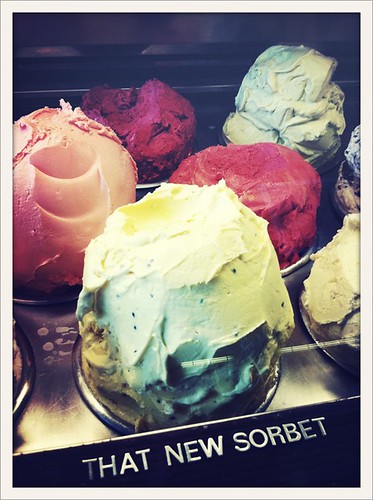 Also in the kitchen will be a pastry chef from France. “All the pastry chefs go ‘yeah yeah, I know what I’m doing’, but they forget that gelato melts,” so Messina has been training her in the world of working with subzero-optimum desserts.

Nick also hopes to do a savoury degustation that incorporates gelato. “It’s really way out. We don’t know if it’s achievable yet.”

Gelato Messina will also be part of the new food complex at Star City Casino: “September, we’re going to open.”

Thanks to Nick Palumbo for being incredibly generous with his time and also taking me on a scoop-by-scoop tour of the gelato cabinet (BYO spoon)! Gelato Messina is one of my favourite places in Sydney – if you haven’t been, put it on your to-do-very-soon list. You can find a longer version of this story in my food zine.