Things we ate in Osaka, part one 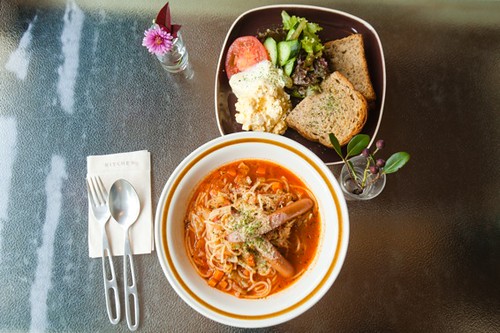 At A-Style Kitchen in Osaka, you sit under lights made from colanders or jam jars now onto their second (brighter) life. Things feel time-worn – but not old – and out the window, you can watch kids jumble through the park, grandparents cruising happily on their bikes or hipsters-on-wheels, zigzagging through as they juggle a phone call. The cafe soundtrack cycles through Bob Dylan, Feist and a Japanese jazzy rendition of Billie Jean. 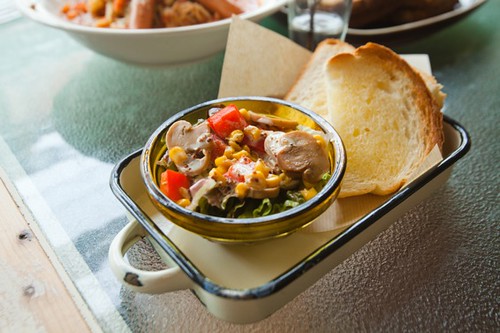 It’s at A-Style Kitchen that I first fall in love with hot yuzu tea (served with a mini-beaker of honey) and also am introduced to the bejitarian confusion that will make many cameos throughout this Japan trip. The Japanese word for vegetarian doesn’t ever seem to fully clear the picture and its mention signals the first of many conversations where a waitress will nod and then say something like “bacon OK?” 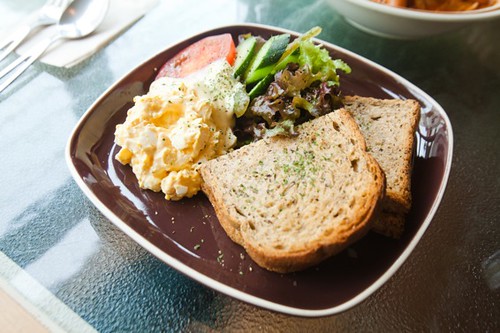 It’s amusing, rather than something that slowly drives you humourless, and one upside is that it gets you engaging with locals (brokering alterna-dishes, making lots of cross-signs with your arms when discussing a contraband ingredient) instead of just pointing coldly, efficiently, at a menu and slinking away. 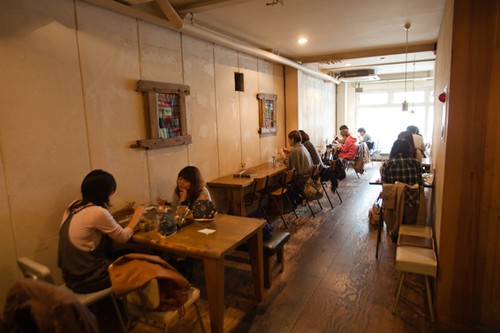 I love how Japanese menus figure out Western dishes in their own way. Will’s minestrone is quirkily reworked with spaghetti (instead of the usual short pasta) and a sausage on top. It’s like a culinary version of Google Translate that doesn’t quite clinch the exact meaning, but that’s what keeps things enjoyably unpredictable (and delicious, as Will notes).

And the compulsory drizzle of (always amazing) Japanese mayonnaise on every kind of salad keeps a Jap-mayo tragic like me pretty happy. 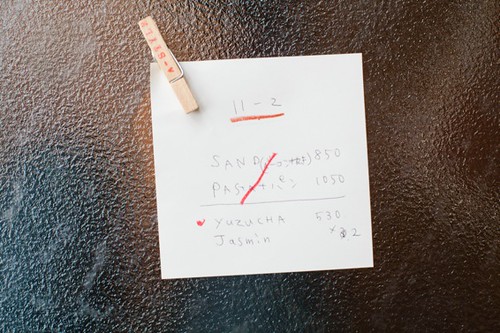 Even when it’s down to small-scale things, presentation in Japan makes an impression – like the hand-stamped clothes-peg that holds our bill in place. 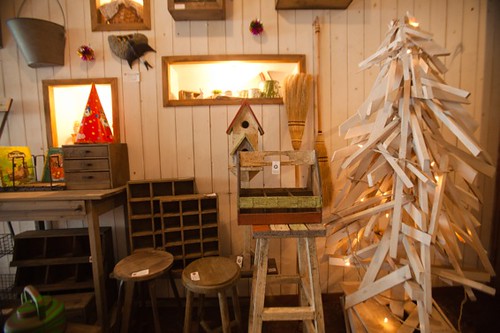 We found this zakka place through one-time resident Amy and her handy Osaka Cafe Lunch book. 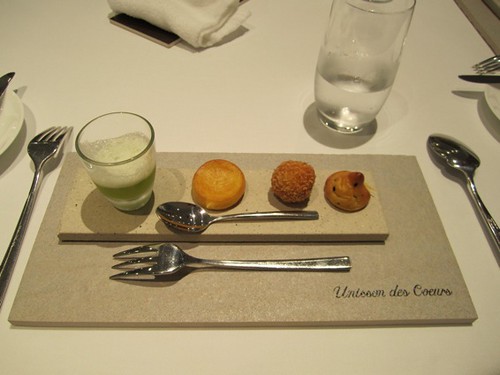 OK, I am a total travel over-researcher. I’m the type of person who doesn’t get on a plane unless I’ve worn out nearly every site or blog that covers the place listed on the end of my boarding pass. I even set up Google Alerts for where I’m going.

This is how I found Unisson Des Coeurs in Osaka. 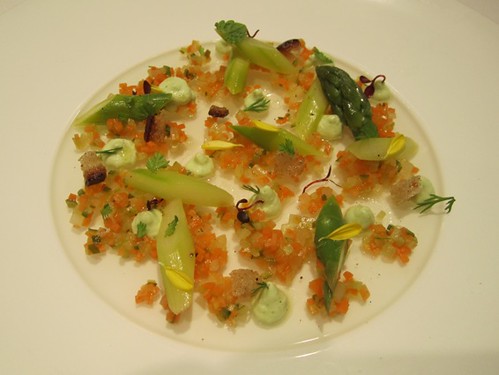 As the giveaway name suggests, this restaurant has some French in its DNA. The 32-year-old head chef, Mitsuharu Sakamoto, has spent seven years in French kitchens (including a recent two-year spell at Le Meurice in Paris, which flaunts three Michelin stars). He opened Unisson des Coeurs earlier this year and already has a Michelin star of his own. 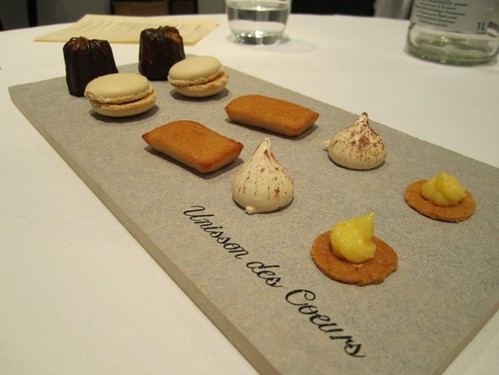 The most exquisite part of the menu was a plate of sculpted and finely chopped vegetables set into a clear disc of lemon jelly. It was a tidal wash of flavour, with some parts so scaled down in impact that when you hit other full-pitched ingredients (minty dollops, elegant lemon, light asparagus, the vinegary crunch of carrots), it was such a revelation. 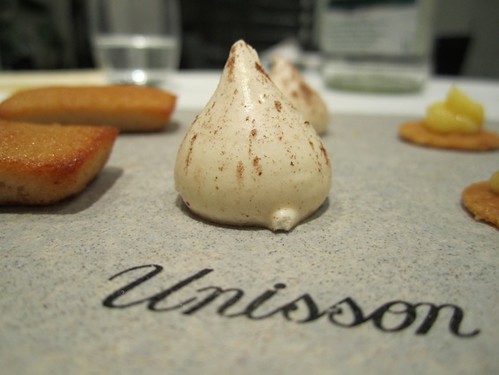 I also loved the watercress soup, which had distilled a throat-strangling green into a deliciously creamy star ingredient; and even better was the mushroom soup which had so many pitches of flavour. The petits fours, especially the cannelle (springy and spongey while crunchy on the outside), capped things off nicely. (I didn’t love the bean desserts, but it’s hard to convert me with Asian-style sweets that I’ve never quite clicked with.) 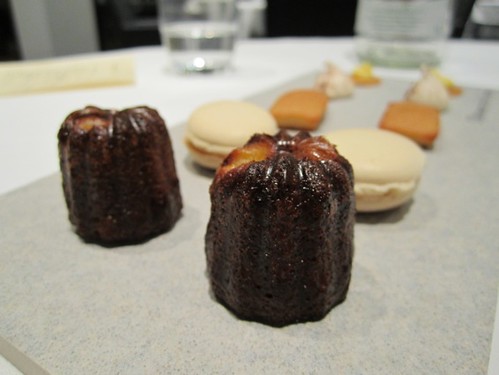 As we were preparing to leave, we had a small chat with the chef. On learning we were from Sydney, he simply mentioned – as a geographical reference – Becasse, and that one gesture simply made the world contract. I love how these names of restaurants can – in far away places – be conveyed like passwords, like totems, like unbreakable souvenirs. 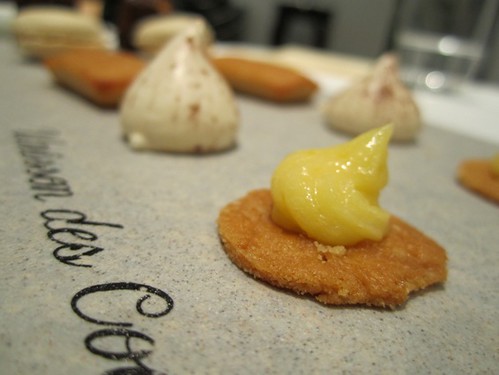