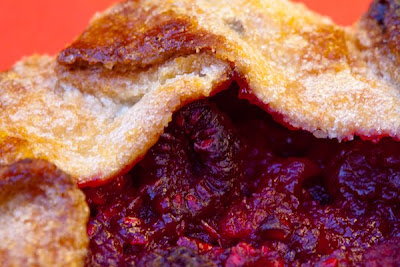 Last month, I went to a great talk given by Christopher The, who runs the wonderful Black Star Pastry in Newtown. (I’ve been meaning to scribble something on it much sooner, but life has had a funny, dodgem-car-like way of throwing plans off-course.)

His talk was part of the Food&Company show on at Gaffa Gallery, and Chris began it by describing the patisserie’s Raspberry Galette ($6), and “the perfect moment”. Each galette is crafted by hand and the best time to have it is 15 minutes after it comes out of the oven. Right away is too soon – you need to allow the sugar to crystallise and for the fruit to start tasting like fruit again. (He compared it to jam, which tastes like nothing but sugar if you eat it straight away. Time is an important ingredient.)

Chris said he wanted to master “the perfect moment” and give it to other people – it’s the ultimate wish when baking and running a patisserie. (Unfortunately, the reality is that it’s impossible to finish everything exactly 15 minutes before it’s ordered.) 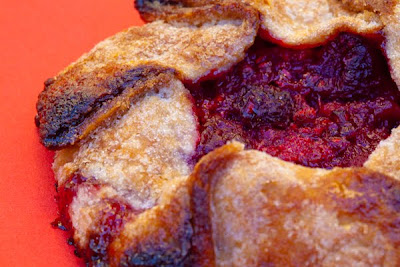 Other things he talked about:

-The Toffee Apple Rolled in Crystallised Lilac Flowers that everyone comments on when they enter Black Star Pastry. Even though it’s such a big talking point, they only sell one every two weeks.

-The history of the Strawberry/Watermelon/Mascarpone Cake, which has had previous lives at Rockpool, Victoire and Yellow Bistro. Chris has added some original flourishes to make it his own, including the surprise hints of “little leaves of tarragon”. 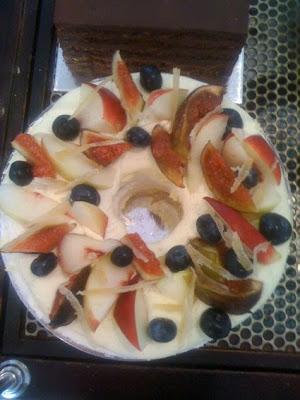 -“People in kitchens dream about the office job they’ll have,” Chris said. One where they’re “not covered in flour” or needing to get up at 3am every day. His is designing stools.

-An Argentinean TV crew recently rang him up say they wanted Black Star Pastry to make a “reworked pavlova”. “We’re coming in two weeks!” they told him. So his remixing of the classic involved white nectarines, figs, marshmallow and a surprise band of passionfruit jelly. 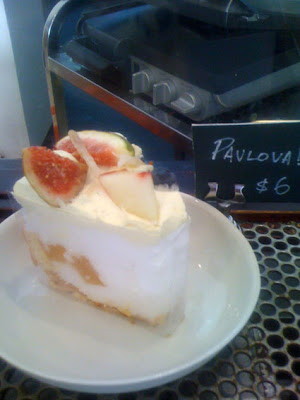 -Chris says he doesn’t like colouring (so his macarons aren’t bright pink or green, but lighter, dustier tones that resemble the natural ingredients that go into making the meringue and ganache). The one time he skipped that rule was for his daughter’s birthday cake (that’s understandable – everything edible at a kids party seems colour-coded in rainbow-intense brightness). This made me think that having a dad who is a pastry chef is probably the coolest thing you could wish for as a child (toyshop owner would be number one, though). 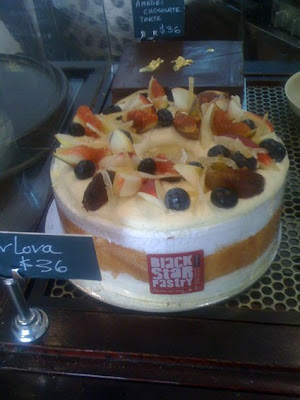 -One of the things you ask yourself when you run a shop is whether you close on Anzac Day. So instead of just treating it as another public holiday, this year, Black Star Pastry put up the open sign and created a special package of Anzac biscuits. Each one came in a fabric parcel, wrapped with a sprig of rosemary (to signify peace) and a postcard to send home. Chris researched and thought about the picture to include and he decided on an image of children – because, after being on the field, how amazing would it be to see the kids you haven’t for the last two years? After the Anzac biscuits were sold, the patisserie gave the money to Legacy, the charity that cares for families of war veterans. $400 was raised.

It’s not often chefs get to reveal the ideas that lead to what comes out of the oven, which is why I really enjoyed this particular talk. It also gave me more good reasons to visit Black Star Pastry (even though the justifications are endless). If you haven’t been recently, try the Mandarin & Coconut Panna Cotta ($6), which will only be around as long as the season lasts. It’s the best cold-weather dessert around right now.

Thanks to Christopher The for the iPhone images of his pavlova. Will took the pictures of the raspberry galette. There is no photo of the panna cotta, because I ate it before a camera could turn up.