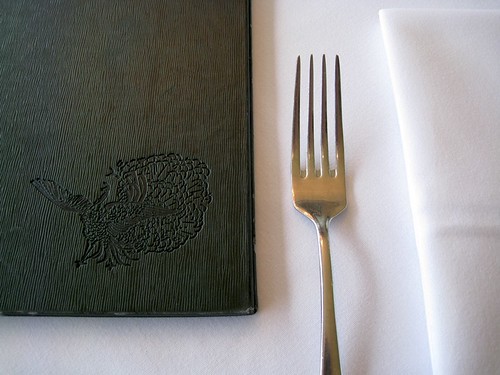 January is a fast-disappearing month. It’s like the guest that leaves your party without saying goodbye. January makes such a whirlwind exit, I think, because there’s so much on (Sydney Festival, Australia Day, New Year’s, holidays, concerts galore) and all these events always come with a good excuse for eating.

Anyway – the January blur may explain why this post comes about a good half-month after most people ripped the first page out of their 2009 calendar.

January is good for sampling Sydney Festival Fast Feasts: a $25 invite to try a set dish at a fancy restaurant before you rush off to a show. A glass of wine and Ferrerro Rocher is included. And – often, if you pick the right place – an awesome view of the city. 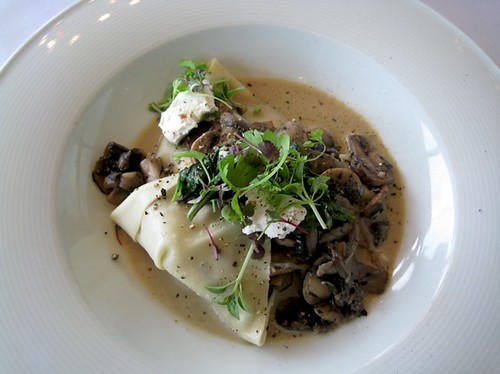 Harbour eye candy had a l’il influence on my first Sydney Festival Feast pick – Cruise down at Circular Quay. Another hook was their set dish being vegetarian: Open Ravioli of Wild Mushrooms, Baby Spinach and Goats Cheese with a Mushroom Emulsion. 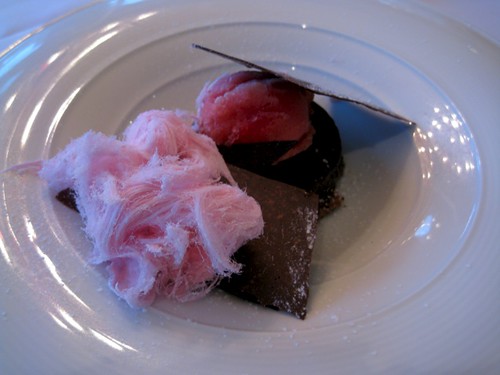 It was lovely – not one of those dud, afterthought vegetarian meals that fancy restaurants can often serve. The mushrooms were velvety and flavoursome but without that heart-attack shock you get from uber-rich food (these ‘rooms weren’t sinking in an overbuttered pool, as chefs can have a habit of doing). I’m pretty sure my first bite was followed by a mouthful of semi-digested praise for the dish.

Because the waitress tipped us off to the fact the dish was “a little small”, we also went halves on a Mesclun Salad with Tomato, Cucumber & Raspberry Vinaigrette. It was generously sized – and sprinkled with crunchy walnuts & other surprise ingredients not mentioned in the line-up – which made Michael think it might be super-expensive. But it only turned out to be $8. (Pretty decent, as some fine diners will charge more for the tiniest smatterings of dressed rocket leaves.)

For me, the Fast Festival Feasts are really about expanding beyond the set dish and splurging out on a dessert as well. So I got a Chocolate Marquise ($14) – Cruise’s version is made of flourless chocolate cake, plonked with raspberry sorbet and chocolate shards on top, with a little off-shoulder fleece of rose pashmak.

The chocolate cake was a little too thick for my liking and the dessert, as a whole, tasted like a posh Wagon Wheel – which is a good or bad thing, depending on how your Wagon Wheel feelings sway.

Even though we were getting the el cheapo menu at Cruise, there was definitely no feeling that we were being treated as second-class diners. And there were a few notable pluses I liked: one, each set dish comes with a glass of wine – and though I didn’t want one, they gave Michael two instead (this didn’t happen when we had the Fast Festival Feasts at The Summit); two, a Ferrerro Rocher is given away with each meal, they gave us four instead. I love it when staff are intentionally math-illiterate. 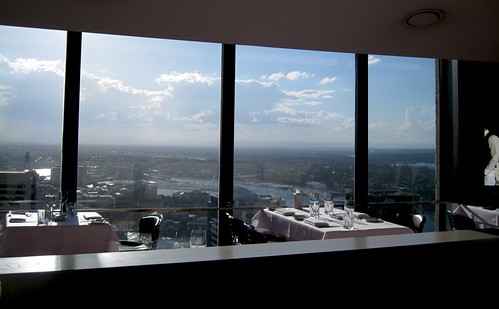 I have always been curious about The Summit. There’s no mountain camp (or overtired sherpa at the top), just a 47-level-high view that stretches across the city. And even that showy panorama isn’t content to stay still – the room moves 360 degrees every 105 minutes, so your perspective of Sydney changes like a slow-flickering slide show.

The view isn’t cheap and neither is entry. Usually a meal at The Summit starts at $79 for two courses, so sneaking in under the $25 Fast Festival Feasts banner seemed like the wallet-smart thing to do. 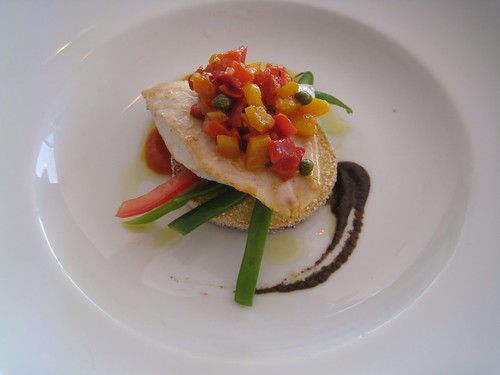 The set dish was the Fennel Salt-crusted Hiramasa Kingfish with Crisp White Polenta and Basque Piperade Dressing, which Grace was a fan of. I’d called ahead and asked if they offered a vego alternative and the kitchen offered a tasty Pumpkin Rotolo with Goats Cheese and Fried Sage. Off-menu dishes can be a lottery, but I was lucky in this instance. It was impressive. When Amy (who is currently based in Japan) saw what this looked like, she said, “Would it be extreme of me to fly to Sydney to eat this?” 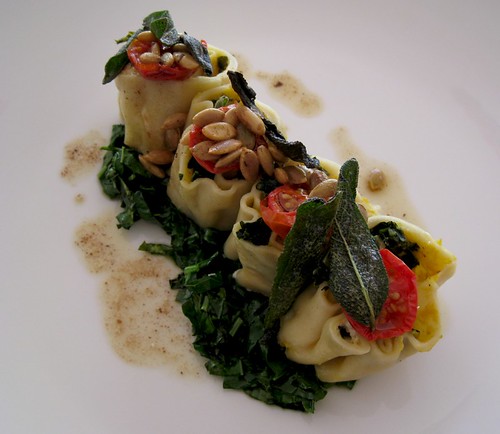 So, I branched into dessert territory again. I thought a Hot Mango Souffle with Toasted Coconut & Mango Salad & Mango Soup & Confectioner’s Cream ($20) would be everything a mango-fiend like myself would want. It turned out to be one of those menu optical illusions – where what sounds so seductive in print is undone by the physical reality of the dish. The salad and soup was a mini-smattering of fruit in a spoonful of syrup. The dollop of cream was about the same size. The souffle was OK – but something so eggy and subtle-tasting needs to be paired with more than tiny extras to heighten the flavour. 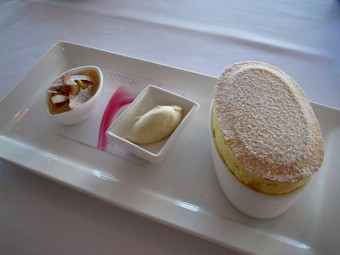 A shame, but with a brilliant view to open with and a fine main as the middle act – two out of three is not too shabby.

Two things if you ever go the Summit – although the restaurant rotates ever slowly, vet your dinner guest on levels of motion sickness beforehand. If they’re easily queasy, ask for a table on the inner ring (the ones right next to the windows might leave them unravelled and frayed); and don’t leave your bag on the floor, as the rotating floor will send it cruising in someone else’s direction. (Which brings me to this – if the wait staff take a second to tell you where the toilets are, it’s not because they’re clueless; it’s because they’re constantly having to reorient themselves with where the ever-moving bathrooms are. Nothing stays still at The Summit.)