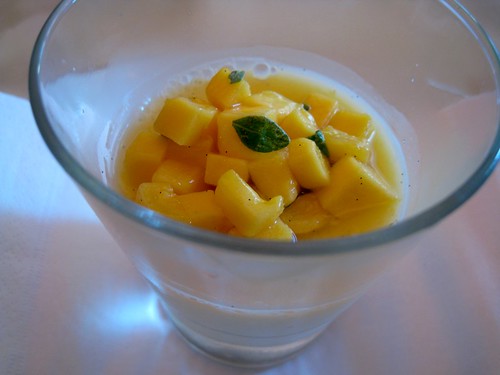 Every TV show has a perfect hangout – the kind of place where characters linger forever and never get shooed by wait staff; with booths ergonomically built for conversations (and sighs) about complicated relationships or just light, fizzy, punchline-packed joking around. The food is smart and there are frappes you can sip with sass or nurse forever. And the music is under-the-radar and quietly cool – but so well-picked that you have to bring it up into your conversation somehow.

That place has somehow escaped a soundstage and become a real-life destination. And it’s called The Falconer.

First off, there are many likeable things about the menu – it’s casual, affordable and inventive (without being too clever that you have to sheepishly ask the waiter to translate what it all means). Until they switched over to the summer menu, my must-order meal each time was the Penne with Eggplant, Smoked Mozzarella, Baby Capers, Tomato and Basil. (Extra points for a dish that not only converted me to the cafe, but reversed my anti-caper stance too.) Its replacement is the new Grilled Eggplant, Zucchini and Pumpkin Ragu with Soft Polenta ($18), which I’ve been told is “supreme”. This was relayed by a friend who I bumped into at The Falconer – and that’s another nice thing about the place. Even when you go on your own, you always seem to cross paths (or booths) with someone great you know. It’s somehow a magnet for people you didn’t plan to meet – yet the kind you’re always happy to see. 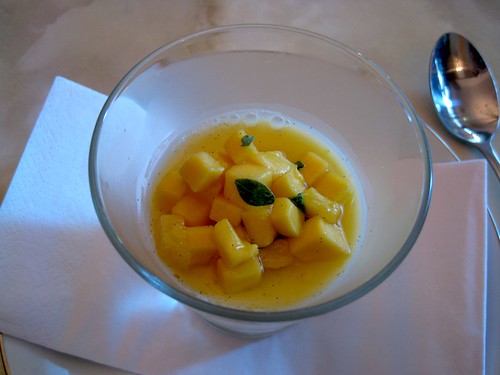 The new menu includes some summer-friendly dishes, such as the Salad of Rocket, Nectarine, Buffalo Mozzarella, Mint and Lemon Oil ($14) and the Vanilla Bean Panna Cotta with Verjus, Mango and Marjoram ($11). Just a glance at the panna cotta was enough to make Will reconsider his Falconer-reluctance. (It’s a damn fine dessert, by the way – not bland like overly polite custards, but refreshing, sweet and even a little bracing in the right places. The marjoram is that little wild-card flavour that seems to be the signature touch on all the Falconer’s dishes.)

Despite the seasonal menu change – there have been some stayers, such as the Tasting Plate of Entrees and the Shoestring Fries with Aioli ($7); order the latter and watch the bowl get flash-emptied; a flurry of fingers will clear out the chips, even at the most well-behaved or carb-phobic tables.

Not only does the cafe have a good soundtrack, but it has made the “where to eat before a gig at Spectrum/Oxford Art Factory” dilemma so much easier to resolve. Before The Falconer, the pre-gig eating choices were pretty slim and often involved shoulder shrugs as you quizzed your friends on where to go. 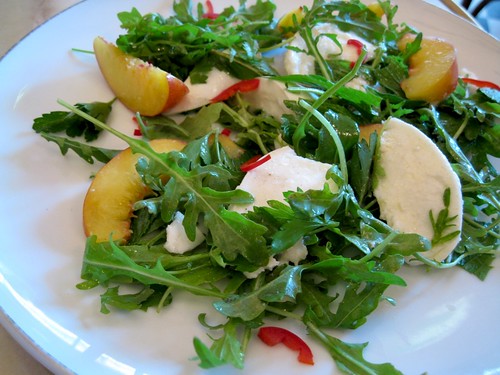 And if you’re not feeling too much of a musical animal, you can also hit this cafe for breakfast. There are lots of side dishes to choose from (some of them better than others – for instance, Will was not-a-fan of the Honey Baked Kuributa Ham, hence his initially less-enthusiastic feelings about The Falconer). The serving sizes of the sides might seem a bit small; the first time we went, it was $4 for a neat little portion of Potato, Rosemary and Leek Gallette or the Sautéed Silverbeet with Chilli and Pine Nuts, but I figure rent on Oxford Street isn’t exactly cheap either.

I like the fact you can order any side on Sourdough Toast (which I did with the Avocado with Lime and Murray River Salt). The Bowl of Freshly Sliced Fruit with Leawood Honeycomb and Roasted Almonds ($9) is a nice match for such a choice.

I have two semi-grumbles, though:

-One, it would be awesome if The Falconer stayed open a little later (considering how night-owlish Oxford Street can be; it would also make for a great post-gig hangout, too).

-Two, I feel a tiny bit worried when I see how empty it is sometimes. It would be a total letdown if a great little joint like this disappeared because people didn’t know about it, or worse, couldn’t be bothered to support it. Then that would explain why a place like this would only exist on TV.