Variety is the confusion of life 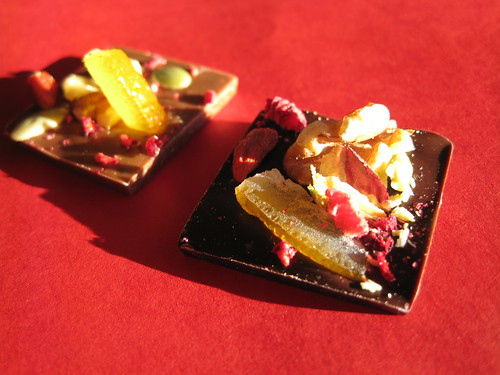 It’s true, we’re all primed to try new things. There’s something about the never-seen-before that queue-jumps other claims for our attention. So I noticed that Kakawa had these new chocolate squares – in dark and milk versions – pressed with deep berry specks and rugged kernels and seeds. One of my favourite things about fruit-and-nut chocolate is you can trick yourself into thinking you’re doing yourself a big nutritional favour by choosing it (when really, you just want a shame-free excuse for getting a full-jolt cocoa fix). These squares come with confetti-hits of flavour (the sour citrus peel rebalances the punchy-sweet milk choc, while the freeze-dried raspberry adds a fruity crackle to the raw nuts).

The downside of the new, though, is that it edges out the old. As David at Kakawa pointed out – what do you get rid of to make room for upcoming products? Some things naturally are phased out (when ingredients, such as figs, go out of season), but how do you decide what to cut out of the line-up?

If you’re a customer who is overprotective about your favourites, you can feel a bit betrayed when your most-loved flavour is the one that gets knocked out when a new range comes in. This reminds me of Gelato Messina, and its fascinating back-and-forth between experimenting with unpredictable, new tastes and having to bring back out-of-commission ones, because people keep requesting what’s no longer available. 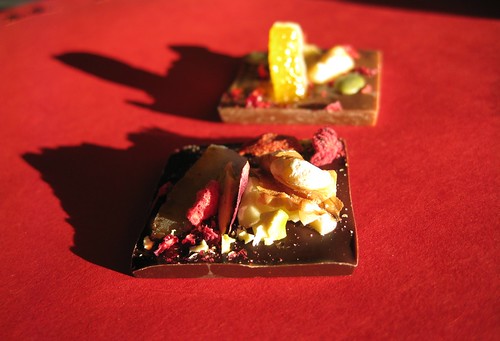 Even though the abundance of one-of-a-kind flavours (such as Peanut Butter & Gingerbread or Blueberry Jelly & Yogurt) is what makes Gelato Messina and Kakawa worth the detouring, sometimes having a generous selection can make things confusing.

For instance, there’s that famous study by Professor Sheena Iyengar about how choice magnifies our interest yet bamboozles us, making it harder for us to decide. (In her research, 60 per cent of people stopped by a display with 24 jams on sale, while only 40 per cent paused to browse at a table with six jam flavours. Yet, despite most people being attracted to the display with more jams – only three percent actually bought any at the spot with greater variety. The stall with only six jams attracted ten times as many purchases.)

On an extreme level, this also reminds me of a story on NPR recently on the rainbow deluge of Kitkat types available in Japan, a country where you can buy the iconic choc-wafer bar in Soy Sauce, Corn, Apple Vinegar, Deep-Fried Sweet Potato and (Blue) Lemonade varieties. As much as I love the invention and crackpot originality of these ideas, the reason behind it is kinda depressing (the faddish obsession with cranking out new Kitkat versions has to do with competition for shelf-space in Japanese grocery stores, luring in kids needing quick study sustenance and a hyperspeed fixation with creating new Kitkat tastes to keep people interested for a nanosecond until the next one comes out). This endless flavour-chase for products that are destined to have such a short half-life – it feels a little wasteful that all that creativity is sacrified for something so fleeting.

On the flipside, the default vanilla option could not bore me more. I’d prefer getting flustered by choice. And choice is what makes smaller, independent places like Kakawa so attractive. I guess we’re always negotiating to have it all, even if it’s entirely unrealistic – and the shelf space isn’t there to make it possible. A constant overflow of new things to fall in love with, and a permanent place for long-time favourites – yes, it’s high on the dream-on factor, but where’s the fun in scaling down your hopes?