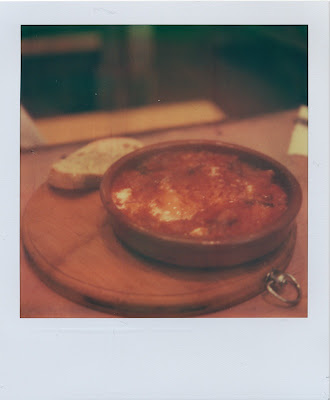 We had breakfast at Clover this morning with one cool-looking chaperone: Will’s just-purchased Polaroid camera. It’s 30-something years old (but has no hang-ups about its age or career/marital/mortgage status) and managed to make our order look like it’d been served in the ’70s.

After being talked out of my usual Baked Beans and Chilli Labne by Will and his “try something new!” cheerleading, I had the Baked Organic Eggs with Wood-Fired Capsicum, Mushroom, Napoli and Fetta with Toasted Sourdough ($11) and was happy I’d stuck out of my menu comfort zone.

We even had bressert – Rice Pudding With Berry Compote ($8.50) – and as a rice pudding doubter (let’s face it, it’s can be a bit boring: it’s the goody-two-shoes of desserts), I have to say it was pretty good. The dish was vanilla-laced and creamy (without being gluggy), while the stewed fruit added a sweet bit of zip. 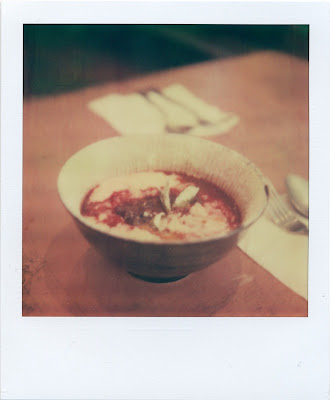 The Polaroid turned out to be a bit of an attention-seeker, with a few curious Clover staff members drawn towards it. One of the waitresses hopes to eventually take instant snaps of regular customers’ orders, and put them on a wall, so you’d always have a photo reminder of what they wanted. Another employee was surprised at how expensive the film is (about $20 for 8 shots from The Impossible Project) and was “honoured” that we would use up shots on the cafe’s food. He ended up taking photos of our photos.

It’s probably the most-documented breakfast we’ve ever had – another nice meal to add to the memory bank, well, that’s no bad thing.