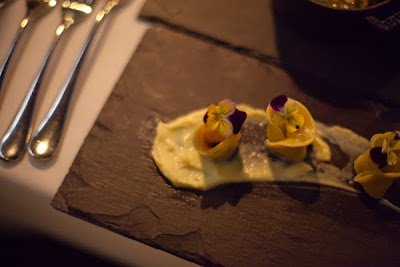 I’ve never before had a meal that unfolded in such beautiful Technicolour.

Each dish I’m served at Restaurant Arras, in Walsh Bay, is alive with brightness, swirls, kaleidoscopic specks and scattered petals – like a micro-exhibition on a plate.

It’s enough to make me wonder if the talented chefs (owners Adam Humphrey and Lovaine Allen) lead double lives as set designers or artistic directors – they know how to draw full-spectrum wonder out of humble vegetables. (Silly thought: do they have an intense screening process, pre-emptively binning any ingredients that aren’t capable of looking incredibly table-genic?) 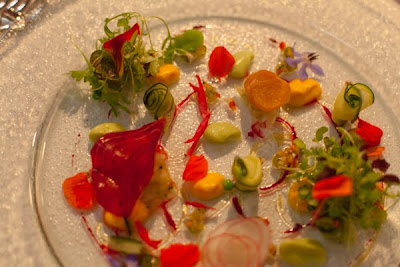 Restaurant Arras opened to a whirlwind of great reviews last year (earning one-chef status on its debut), but the clincher had to be Tabitha’s gold-star endorsement and recollection of the petits fours plate. Apparently, at the meal’s end, wait staff emerge with a big tray of handmade treats, and you’re allowed to take as many sweets as you like. I remember being wowed by this story but also slightly skeptical of its fairytale-ish feel (surely, there had to be a cap on how many pralines and nougat pieces you could sneak away with?); it was simultaneously amazing and impossible-to-compute at the same time.

But without getting all Tarantino-esque with chronology, let’s flash back to the beginning.

I settle in for the vegetarian degustation ($105), and, eventually – course after persuasive course – I realise this is one of the best vego tasting menus I’d ever had. (Even better than the one I experienced at Tetsuya’s).

First, bread-watch. Will chooses white sourdough, I opt for fruit-and-nut and that pretty much sums up our personalities perfectly. Addictive: the unassuming batch of crisp lavash that we quickly strip away from its rack. To paraphrase Jonathan Safran Foer, they are highly delicious sheets of salt. 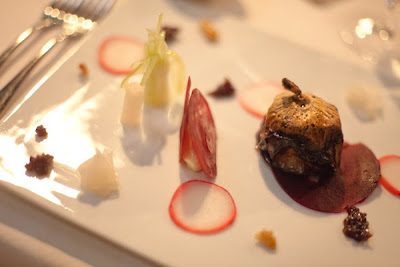 The actual degustation begins with the amuse-bouche of Pepper Tortellini with Garlic Puree, and the row of flowers should’ve tipped me off to the beauty contest that is about to proceed.

The Raw and The Cooked is the most attractive example of guesswork you’ll come across – a course featuring 14 unnamed, well-styled ingredients. I didn’t quite recognise all the individual vegies in this eye-stunning line-up, but its scattering of flavour was unmistakably lively.

A Pickled Onion is the Ugly Duckling of dishes: eating a whole onion is not an event most people would queue up for, but, baked sweet, it’s a solid centre for other flavours to briskly orbit around – tart radishes, sweet fruit paste, a “cheeky little beetroot sandwich” (Will’s description) hiding a revelatory stash of horseradish creme and candied walnuts. 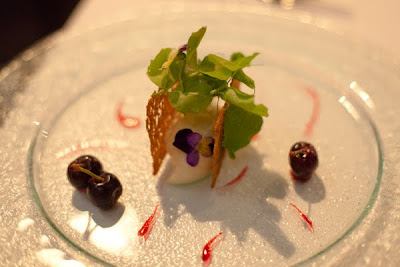 The Cheese Sandwich is light years away from the school lunch staple you used to find, packed in your bag. Wedged between two lacy wafers is a generous heap of buffalo cremosa – all silken and creamy, spiked with sweetness while also hinting of blue cheese’s full-powered taste (without its heavy-duty jolt). Adding some light flavour play-off are pickled cherries and some clean-cut leaves.

Like the kind of guy you’d want to pair off with your single friend, the Orange Squash is cute, smart and funny (truly). Drawing from that colour that rhymes with nothing, the dish comprises pumpkin tatin, pumpkin curry puff, a shotglass of pumpkin soup and orange sorbet, splodges of sweet’n’spiced pumpkin puree, and gorgeous orange brittle that has sugar-trapped pumpkin seeds inside. (The latter is so more-ish that it inspires some food envy and deal-making from Will; reluctantly, I broker a few pieces for him.) And, as punchline to the dish’s title, there’s an actual squash on the plate. I find this endlessly endearing and hilarious. “I see you get our chef’s humour,” says Alon, who is the restaurant manager. 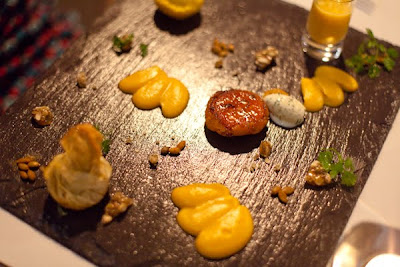 My favourite course has to be Tomato Soup and Friends – how could you not adore something with such a picturebook title? The “friends” happen to be eggplant and zucchini which (admittedly), are served in a rather separatist (unfriendly) bowl. Still, delicious! The battered zucchini is sunk in the quicksand of smoky eggplant puree. Nice.

The soup, meanwhile, is just a knockout. The bowl is a sculpture park of ingredients, with miniature stacks of vegetables and other edible curls, bunches and spheres. Standing tall is what, at first, looks like a tower of sushi. This certainty gives way to a real delightful jolt as I realise it’s actually something else entirely: a hollowed out tube of well-baked eggplant, stuffed with a lottery of roasted ingredients, such as sweet tomato. Sitting on top of it all is this punk-like ‘frizz’, which is so, so delicious! It’s made of super-thin strips of eggplant, deep-fried into wild, unruly curls. Wonderful.

And, entourage aside, the actual soup is fine enough. A triple-hit of flavours (sweet, intense, reduced), without being blaringly rich or overpowering, it could work as a loner or as a friend-magnet. More dishes could do with cameos from their ‘address book’ or Rolodex! 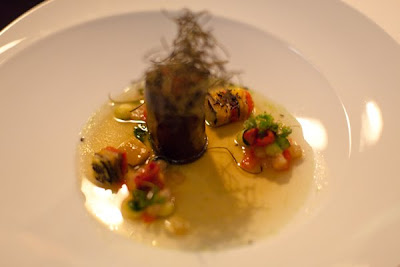 The Pre-Dessert: cheesecake with rhubarb and, I think, a surprise last-minute appearance of raspberry? (Oops, all eaten, too late to check.) And this from someone who usually struggles to finish cheesecake, dramatic stomach-clutching and all. In my notebook, all it says next to this dish is “woohoo”.

Dame Nellie Souffle comes with a singing partner: a raspberry “sugar cup”, a gorgeous cross-hatching of colour which cages in another miniature dessert (which sadly melts away because I start to run out of stomach room). This is the usual part in a degustation where my appetite conspires against me. 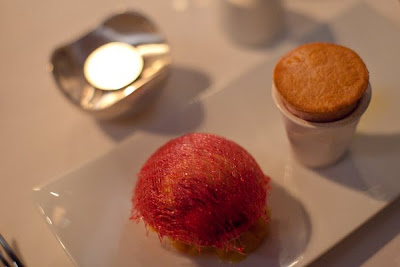 The Liquorice All Sorts course is an inventive, colourful remix of the traditional multistriped squares, with a licorice lollipop sitting on a line of orange sherbet (Will: “are you meant to snort it?”), its shape echoed by a black jelly pyramid; there’s also licorice custard, and pineapple parfait interspersed with aniseed flavour. The odds of me loving this dessert are pitched pretty low simply ‘cos I’m not a fan of the melted-tire taste of the ingredient. But I actually don’t mind the lollipop and parfait – they incorporate a more scaled-down take on the flavour (the jelly and custard are too intensely licoricey to convert me, though).

Will, however, wipes the slate clean with this dessert (literally – the plates at Restaurant Arras are made of that fine-grained rock). 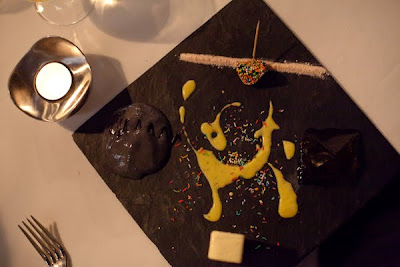 And … The legendary tray of petits fours. Surely it can’t be as mammoth as Tabitha described? Well, as the waitress brings out the epic sheet of slate, every inch covered in sweets, she actually struggles with its weight and has to rest it on our table – that’s how big it is. And yes, we are really allowed to take as many treats as we want!

This open invitation to a jackpot of marshmallows, jubes, coconut squares, honeycomb, chocolates, etc etc, is like a golden-ticket win to Willy Wonka’s Chocolate Factory. I ask the waitress if people go overboard in the face of all this unrestricted sugar. She says that – even though you’re given one plate to place petits fours on – sometimes people start rustling up spare saucers from the table to pile up the excess of confectionery on.

Will, having not forecast this, is too full to even take up this offer. So the waitress kindly says she can give us a take-away bag (!!!) for us to shuttle the treats home. I remember trying not to be too greedy, but picking out quite a few goodies: a choc-dome filled with raspberry fondant (so good!), apple-beetroot jubes (strange, but worth it), and well, the rest is a sugary blur. However, we do have a mini Bounty ice cream on the spot, cos even our maxed-out appetites could negotiate that. 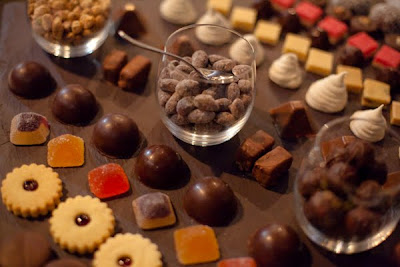 It was the best kind of end note to a night that was such a headlong delight. It actually lives up to the restaurant’s brief, where chefs/owners Adam and Lovaine mention how much they want the joy of running Arras to translate to guests. From each detail – from the food to the service – this really does come through.

And while almost every degustation I’ve had has one off-pitch course (usually the boring egg-cooked-at-two-temperatures number that is so often trotted out, yet is so underwhelming), Restaurant Arras impressed at every turn, even on a dessert centred on one of my least-liked ingredients of all time.

The only slightly less-than-great thing was, the place was near-empty on the Friday night we were there – I hope that’s unusual because it’s the kind of venue that deserves constant full occupation. (The under-patronised feel made me worry – the way you do when you suddenly like a place, only to fear it may not be around for long. The waitress reassured that they had been full the previous day and were booked out the following night, though …)

In any case, don’t let this restaurant slip away. Inspiring, witty, inviting and full of dazzle, this is the kind of place you plot return visits to.