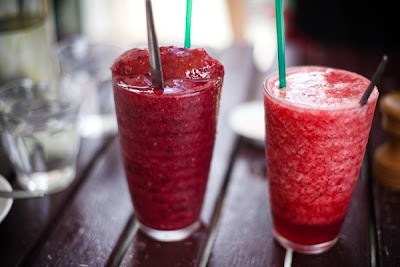 If it’s possible to get to know someone over a drink, can you properly size up a cafe from just one simple beverage?

The first time I went to La Buena Mesa, a year ago, all I had was a Mango & Kaffir Lime Leaf Frappe and already, I knew I liked this place.

Due to my brain geographically misfiling this cafe as being in Petersham, I only got to revisit La Buena Mesa recently, but a couple of meals since, I feel I was right from first sip.

I’m a fan of their summer-bright frappes – Pineapple Apple Mint and Raspberry Cranberry and Lemon ($6.50 each) – which come out with such crushed-ice thickness, you may need a snow shovel to actually eat it.

I also like their LBM Breakfast, where you get to scratch your head over which six choices will make it onto your oversized plate ($18/$16 for vego/less choices priced accordingly). Yes, there are picks that are on nearly every breakfast line-up, such as Eggs, Wilted Spinach, Bacon, Avocado and Potato Rosti, but things take a nice South American twist with the Champinones Al Perejil (aka mushrooms) and Porotos Con Mazamorra (aka beans).

I’m a shameless cheerleader for the beans – they are pretty damn good. I’ve ruthlessly bullied other people into ordering it too, it’ll make you that fanatical. Beans can be pretty boring and saintly, to be honest, but at La Buena Mesa, they are served with this mysteriously good puree. It’s sweet and spiced – but not a taste-bludgeoner in anyway. It’s subtle and really lovely. 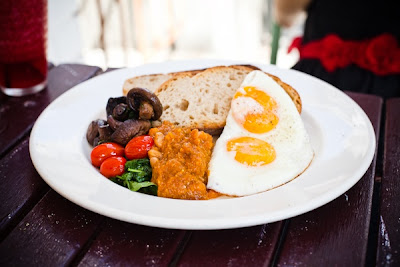 I tried to conspire with the waiter to find out what was actually in the dish – and it turned out he was a hopeless devotee of Porotos Con Mazamorra too. He said the other staff laughed at him for ordering it so much. (But all the jeering, surely, would be worth it!)

Pumpkin, he says, is the enigmatic ingredient in it. Aha – that’d explain the lingering sweetness. (Now, how to make off with the entire recipe?)

Even though the cafe has a nostalgic Australian look (think wistful corner store from a white-picket-fenced yesteryear) and Provencal pastel deck chairs cutely clustered around tables, the defining influence on the menu is actually Latin American.

For lunch, you can order Beef/Spinach & Ricotta Empanada with a Tomato Salad & Pebre ($9), Chilean Tapas ($18 for two people) and Chacareros ($14.50 for a Chilean steak sandwich with green beans, tomato, avocado and Chilean chilli sauce & mayo on freshly-made Chilean bread – Will is a fan of it and the delicious mess it makes as you clutch it in your hands, slowly outsmarted by filling-slide and gravity).

La Buena Mesa is a cute and lovely joint in a quiet corner of Annandale, so my only quibbles are slightish. 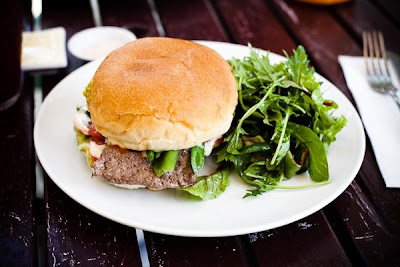 For the portion sizes, the breakfast may seem a bit pricey (the serving of Rosa Bella Tomatoes, as you can see from the pic above this one, is not exactly free-flowing), and finding the toilet can be a mystifying process. (If you ever need it – it’s the second gate on your right, on the street of the entrance, in the white building that confusingly looks like a storeroom. Don’t freak, push the door open and it’s totally fine.)

That aside, this is the kind of neighbourhood gem that you’re not sure whether to be all schtum about or outrageously invite every other friend to share your breakfast table with, because you like it so emphatically.

It’s also a provedore, which means you can steal home with their range of Almond Bread or Orange Marinated Olives.

Or, you can just leave happily empty-handed but full-bellied, knowing that the cafe lives up to its name – La Buena Mesa, which means ‘good food’ in Spanish. But funnily enough, after a visit there, you really don’t need Google translator to explain that to you.