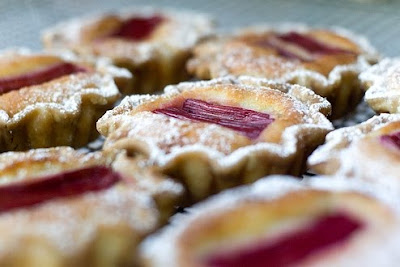 Photo of rhurbarb and almond tarts by Will Reichelt, during one of the many occasions we’ve hung around Bourke Street Bakery

As you may know, there is a new Bourke Street Bakery cookbook. It’s a hefty volume (big enough to knock someone out with, if you want to ruin a perfectly good cookbook with a bit of brain) and includes recipes for all your favourites from this Sydney institution: the Chocolate Mousse Tarts, Lamb & Harissa Sausage Rolls, and the many seed-studded and herb or veg-bolstered sourdough loaves. They’re all in there except for the blissfully good White Chocolate and Raspberry Muffins (although the dark choc equivalent is in there, so go figure). There are also recipes for sweets that aren’t on sale in the Surry Hills, Marrickville and Alexandria stores, and gluten-free and other dietary alternatives are covered, too. 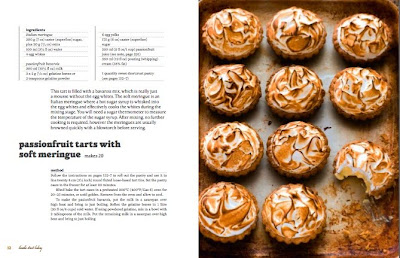 In honour of this, I asked the super-talented Brendan King, a former pastry chef at BSB, for his memories of working the ovens and pots there. He was also a presenter at FBi and taught me how to use a radio panel back in January 2006; now he hosts a show for ABC in Gippsland, VIC. But his recollections at the bakery are pretty strong and I started off asking him about the hardest recipes to cook there …

One of the worst things to make was the meat pie mix. The flavours are great but we used to have two or three MASSIVE 120-litre pots on the stove filled to the brim with this hot pie mix and trying to stir with these huge wooden spoons was crazy. We’d have to stand on milk crates to get right over the pot and stir in the corners and you’d be working in what felt like a really small area because of the size of the pots and all the boxes of veg to be cut up. It was a tiring area to work in, on the stoves. Now at the Marrickville site, I hear they have a 300-litre steam kettle that has its own mechanical stirring spoon or something.

Then there’s the lamb and harisa sausage rolls. Insane. I still tell everybody about them. Sausage rolls are a bugger to make and probably one thing that I hated making because it usually came at the end of the day. We’d have to clear all the benches and they were all covered in pastry. Then we’d have to mix all the mince whether it was lamb, chicken or pork and pipe it onto the very long strips of pastry. Then roll them up and put them on trays. Not a lot of fun when you’ve just spent the day moulding and weighing up heavy bread dough. It went down a treat though when I reheated the one my partner Catherine brought back yesterday.

We used to get a loaf of bread to take home a day. More if you were around at closing time. And I had just come back to Australia and was still extremely broke trying to get out of debt. I LIVED on bread for over a year.

I remember starting at Bourke Street around 4am and finishing work then going and do some stuff at FBi, then going home thinking, “what am I going to have to eat for dinner? Ah, the same thing as last night – TOAST!”

But I didn’t get sick of it. In fact, I still crave a slice every now and then. I got Catherine to bring me home a sandwich as well the other day. The lamb, quince paste and fennel sambo is killer. I ate it as I drove my family from the airport and thought this is what life’s about. Family and the best sandwich I’ve eaten all year!!