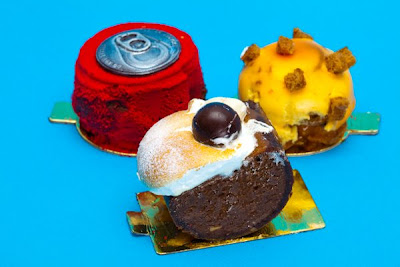 I know Adriano Zumbo in Balmain is so heavily blogged about but I couldn’t pass up the chance to use these eye-stunning pictures.

A few weeks ago, Will rang me to ask which food items he should shoot for his last photo lighting class. Without a beat, I knew where he had to go. Adriano Zumbo can always be relied upon for its million-dollar-looking, haute-couture-like patisserie creations.

These pictures are from Will’s final lighting class. (PS. Stylist’s tip: a cheap sheet of cardboard always makes for a handy backdrop.) 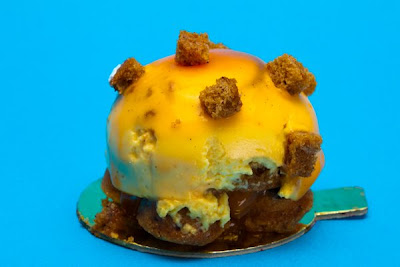 This looks like a space-age helmet and has the potty-mouthed name of Uranuse ($7.75). The crouton-like studs are made of pain d’epices. Locked inside is mandarin mousse, sour cream jelly and other ingredients that sound a lot sweeter than its cheeky sneaky title. 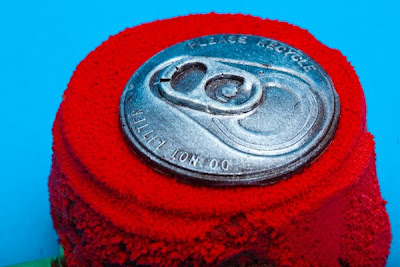 You wouldn’t wan’t to crush the Escape From a Columbian Rainforest ($8.75) treat with your foot and then throw it into your recycling bin … Its cola-like resemblance suitably contains a cherry and cola jelly & liquid centre, but the rest is mainly uncarbonated chocolate. 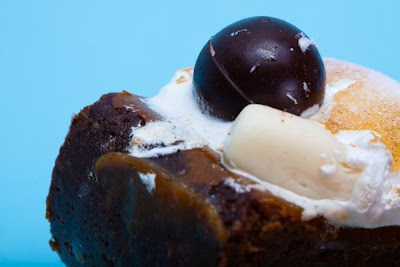 Will’s favourite was Ed Rock the Cradle ($7.90), which is meant to look like an upside down baby-rocker. On top is a caramel and a baby bottle sweet but I think these infant allusions went past Will’s non-clucky head. He was too busy concentrating on the milk coffee cheesecake and chocolate and coffee mousse, which seemed perfectly engineered for his caffeine junkie self.

PS. We squished in another visit to Adriano Zumbo this weekend and suffered mild shock from seeing the long, snaking queue. They’d run out of the infamously good salted-popcorn macarons, but Will was happy with the rice pudding ones as consolation. (Also, the few macaron crumbs left for sale seemed to prove Tabitha’s long-held prediction that macarons would be the new cupcakes. Especially as Black Star Pastry today also had been wiped out of the ganache-filled treats too.)