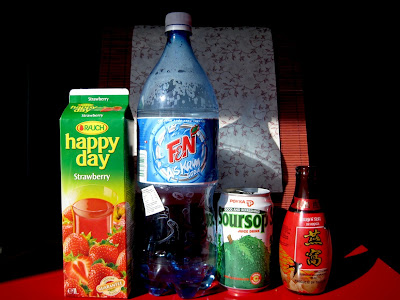 Every now and then, my friends and I throw a dinner party where the challenge is to bring the weirdest beverages possible.

Last time, Sophie not only hit the “suspicious drink lottery” – she did it UN-style, with her bag of German Strawberry Juice, Indonesian Creaming Soda and Chinese Bird’s Nest Drink (which listed “bird’s nest” as an actual ingredient). Oh, and let’s not forget Soursop, another eccentric Asian contender.

The strawberry drink was unbelievably, headscratchingly good. I suspected it was really a carton of sugar in disguise, because it was so addictively sweet. But the main ingredient truly was strawberry – and not a wimpy, watered-down version of the fruit but a maxed-out berry-thick glug of a drink. The food miles of carting such a product from Europe are terrible, but I salute the Germans for inventing a beverage that truly lives up to its name: Happy Day, indeed.

Bird’s nest drink sounds horrific, like you’re about to have liquified twigs and feathers, but it was surprisingly OK. It tasted like a watery chestnut drink. It was way better than the Greek blueberry juice we once tried, the one with dubious health claims that pretty much ensured we’d live forever after a glass or two of it. But maybe if you can stomach something that tongue-repelling, you’re made of invincible stuff. 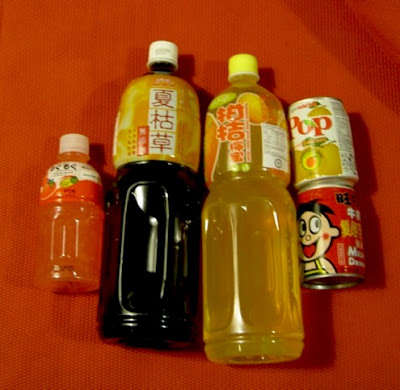 More recently, I bought some weird bottles and cans from my local Asian supermarket. The worst was called Common Self-Heal Fruit Spike Drink (their marketing team really needs to work on that), it tasted like mass-marketed iced tea. Orange Lemon Honey Drink looked dodgy but was, as Sophie pointed out, surprisingly “delish” – it was like the Oasis sugary tea drinks from the 90s.

Because the first drink was so unpopular, we started to dole out small amounts of the remaining ones to try (sort of like a wine tasting, except with non-alcoholic hyper-coloured beverages and no one making hoity toity comments about oak notes). There was Japanese Strawberry Juice that was highlighter-pink and unlikely to have had any fruit content at all, but boy was it a lot of fun. It also came with bonus jelly blobs, which is one of those non-essentials that’s always a delight.

The upstage of the night belonged to a drink with a plain (yet definitely suspicious) name: Milk Drink. I was worried that people throwing up after glugging it would be a real possibility, especially as the ingredients were milk powder, water and some weird preservatives. But it was surprisingly … nice. Lisa said it tasted like condensed milk – a flavour that’s an instant childhood-transporter – and I’d admit, that’s what it’s like. A thinner, more drinkable version of it, but still, not a bad thing. And definitely better than Malk, from The Simpsons. That’s the ultimate suspicious drink.