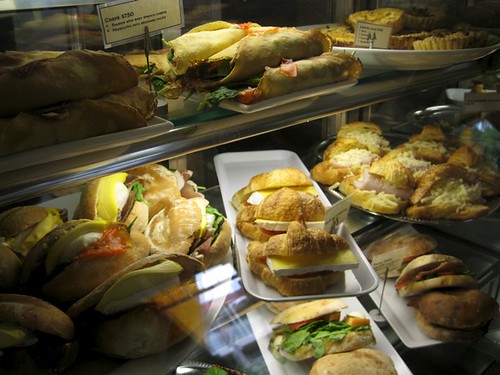 If the name isn’t already a red (white-and-blue) flag, then the Brie and Tomato Croissants and Savoury Crepe Rolls will clue you in. St Germain Patisserie may be on a Redfern street corner, but its picnic-ready display will whisk you to a small patch in Paris’ Sixth Arrondissement. 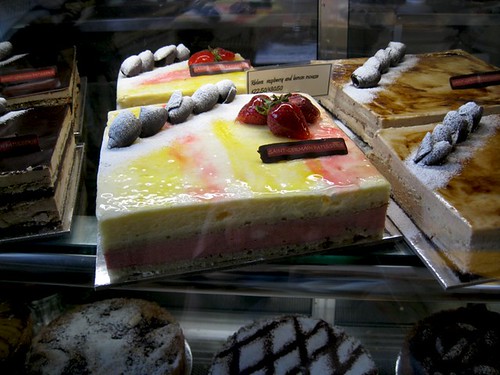 The Riviera Raspberry and Lemon Mousse Cake, with its pink-yellow pastel layers, is a dream. If you want to downsize, you can always get a miniature, more portable version. It will only last about five steps out the door, ‘cos it is gloriously good. 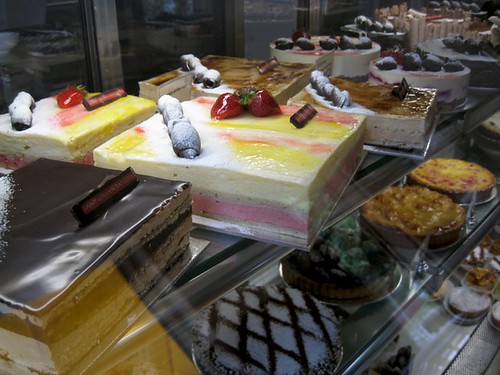 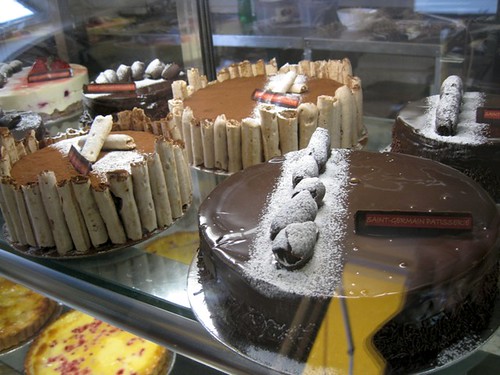 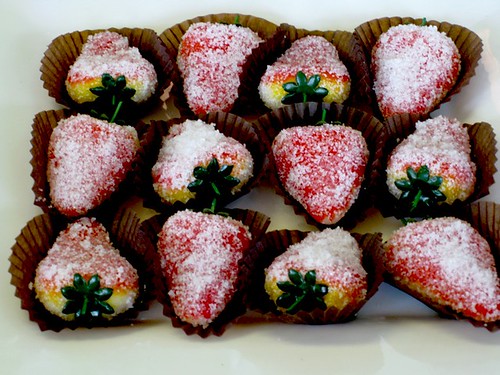 A glance at the shop display of Croissant D’Or patisserie explains how the French came up with the term, “window-licking” (faire du lèche vitrine). With Marzipan Strawberries and Artisan Chocolates, it’s hard not to linger out front (and then progress to lingering inside). Whether you literally want to act out that French phrase depends on how bold you are in public (and how much health insurance you have). 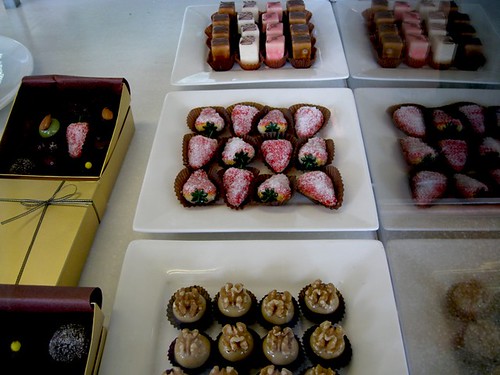 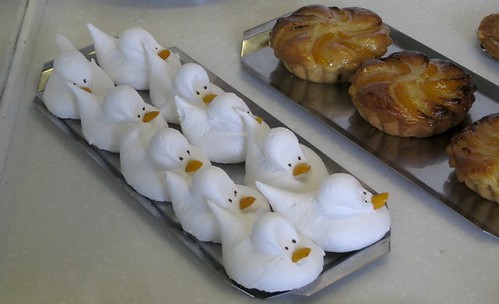 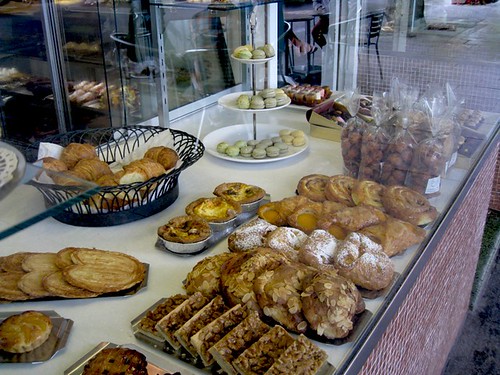 My last accidental visit was squished between two sit-down meals and a bag-full of treats from Black Star Pastry, so I couldn’t walk out of the store with very much. A Lemon Macaroon ($1.50) seemed the perfect moment-melter, without infringing too much into the other meals left in the day.

If you’ve ever dined out with with a chronic restaurant-grumbler, you’ll know the hi-rotation complaints that’ll be aired as the meal progresses. Everything is “too expensive” or “not nice” or “could be made at home, but better”. Trying to placate someone like this is like trying to win against the house in a casino. Good luck if it ever happens!

So, that said, there has to be a major culinary award for any restaurant that is immune to my mum’s griping. Somehow Manmaruya in Campsie blazed right through these difficult hoops and had my mum a) trying to weasel a recipe out of the wait staff and b) wanting to come back again. Amazing. This was a history-making moment to me.

It’s funny because Manmaruya isn’t the best Japanese noodle bar in the world (or in Sydney), but it’s affordable, fresh-tasting, staffed by nice, polite folks and somehow, miraculously, that makes it a parent-pleaser. It’s a standout alternative in a neighbourhood that doesn’t feature huge variety. And in an area where plastic tablecloths and tattered menus are the accepted norm, it offers a relatively “chic” fit-out, in that minimal Japanese way that’s hard not to like. (“Chic” by Campsie standards, that is – interioristas won’t be exactly camping outside to gawp at the wall furnishings and layout.)

Oh and they let you order mini-ramens, like at Ramen Kan, which is another deal-sealer.

The only off-key thing about Manmaruya is the blue side-lighting that resembles the anti-heroin-injecting neon used in public bathrooms to dissuade people from shooting up. Maybe the subliminal “say no to drugs” message is part of the parental approval. 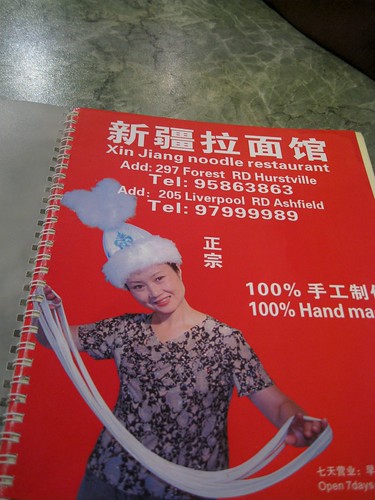 I was walking up and down Liverpool Road in Ashfield, deciding to what to have for dinner, when I came across Xin Jiang. There was something eerily familiar about the menu – Fried Eggplant with Special Sauce, Spring Pancake, Hand-made Noodles – and it hit me. The food was exactly like what you can get at Sea Bay in the city. In fact, you can also order the actual Sea Bay Vegetable Salad here. And yet, the restaurant isn’t actually called Sea Bay and doesn’t seem to explain its link (or identical-twin menu) in any way.

Not that I’m going to complain, this Sea Bay doppelganger means I can tuck into great Fried Pumpkin Dumplings without having to hop on a train to the city.

Also, the Xin Jiang menu has this awesomely cheesy picture of a woman in an awesomely-cheesy hat – it’s so over-the-top that you doubt it could be real, only to realise the hat is actually on display in the restaurant. Brilliant. 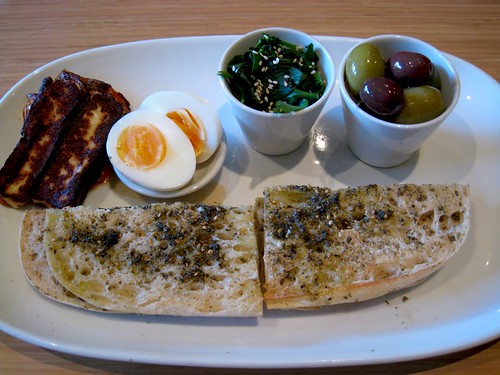 Tabitha created a DIY vegan-friendly menu by going for the simple (though slightly expensive) option of ordering lots of sides and calling it breakfast.

All the food is inventive, zingy and flavour-loaded and Cafe Mint is a good place to hang out when you’re sick of the traditional eggs-on-toast routine.

It’s often packed out and you can’t book, so don’t go there if you’re critically malnourished and need food on arrival. But the (not-tragically-long) wait is often worth it. 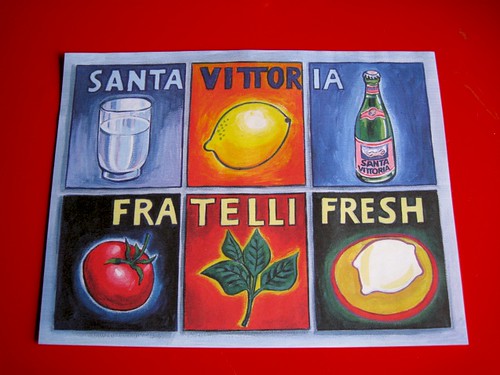 Apparently you can’t take photos at Cafe Sopra in Fratelli Fresh (according to the Herald) and I didn’t want to get in the bad books, so there is no visual replica of what I’ve eaten there.

That said, if you haven’t been to Cafe Sopra already, you must abandon your keyboard immediately and go. And if you have been – well, you’re probably already back in the queue to get a table, right now.

I still remember my very first meal there, even though it was three years ago. It was that much of a knockout. (It’s still on the menu, by the way – Fried Polenta with Blue Cheese and Oyster Mushrooms. Yes, there are some incredibly punchy flavours at play, but I still love it. You might need a salad so you don’t get wiped down flat by the dish, though.)

The place is always stupidly busy, there’s a no-booking policy and it’s impossible to get a seat without waiting in line – in fact, getting into Sopra is like trying to catch up with a friend who is hugely popular and ever-committed to other things and has an impossible diary to work around. But once you find a way to make it happen, all the high-maintenance effort gets rewarded as you sit down and the plates glide onto your table. The vibrant Italian menu is so well-priced for the fine-dining quality of your meal (about $17 for a main). In fact, the food is better than some of the fancy restaurants I’ve been to (where they charge double for a similar dish).

So, despite the hasssle, it’s one of my favourite places to eat in Sydney. (There are two Cafe Sopra locations, which hopefully makes the grabbing-a-table process less painful.) 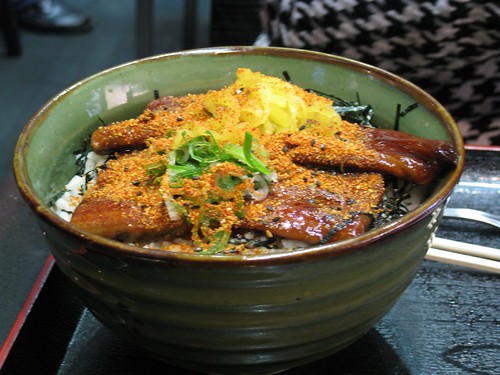 On Ramen is a convenient pit stop near Capitol Square. It’s somewhere to drop into if you haven’t got the legs to get yourself to Chinatown (or if you like to give up easily). It’s not over-the-top fantastic and in fact, I’m not a huge fan of their Vegetarian Ramen, but the vego set is decent, the location is in a good spot and the service is really nice. (My friend Grace’s enthusiasm for her unagi dish balanced out my ramen disappointment.) This is also a huge student haunt – which is often a promising barometer of whether a place is affordable and tasty. 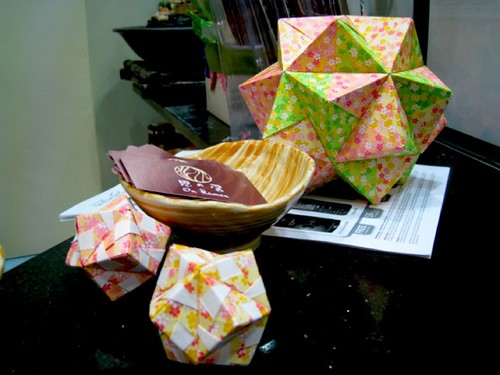 On Ramen always has origami scattered around their counter and one time, when I took way too long trying to take a photo of it all, the wait staff generously asked if I actually wanted to keep the intricate paper sculptures. Sometimes the attraction to a place isn’t always about the food. 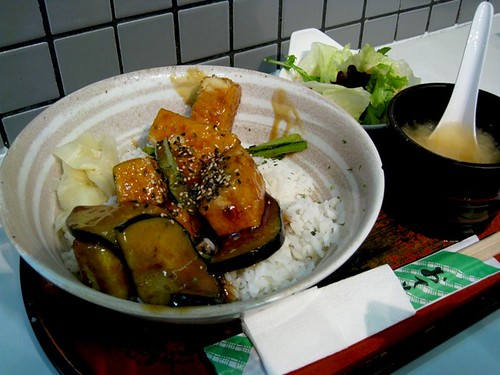 If I was a proper food blogger, I would have wiped down the sauce that looks so unprofessionally splattered along the side of the bowl. But, here’s complete visual proof that I’m not!

I’ve included Sakura here because I think it’s a good spot to grab something to eat on your own in the city. There aren’t many worthwhile, dependable sit-down places in that category.

The joint is tiny, there’s not much ambience, but it is surprisingly affordable for a place right in the thick of the city. (I often stop in if I’m near Town Hall or Pitt St Mall.) Sakura is open late every day and I always get the same damn thing ‘cos it’s such a good deal. The Tofu & Vegie Don will get you change from $10, and yet, it also comes on a tray with a miso soup and mini-salad. This sweet vegie jumble with rice is one of my favourite simple things to eat out. Even if the sauce is assymetrically splattered on the side, every now and then.