Sydney Food and Wine Fair & Blogging on The Radio 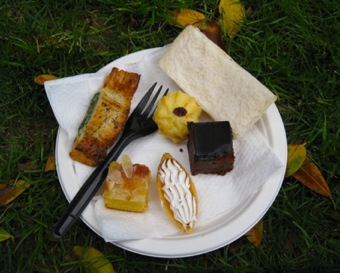 On Saturday, I caught the tail-end of Good Food Month . I’d missed all the sugar-dusted, napkin-crumpling, spoon-sucking fun of October, thanks to bad luck really: I got stuck in a work-coma (which left me a social vegetable), and then I got slugged with a bad cold, only allowed pots of soup and tissues for company.

But I was glad I’d at least made it for the Sydney Food and Wine Fair, which is the grand finale of Food Month (even though it technically spills onto the next calendar page and doesn’t take place in October at all). It sees Hyde Park clustered with stalls from Sydney eateries, gourmet magazines and more. It’s a good chance to try picnic-sized meals from fancy restaurants – such as Otto, Bathers Pavilion and Wildfire – as well as more affordable eateries such as Spice I Am (that iconic Thai joint had a stunning bouquet of fruit to lure the ever-roaming eyes of passers-by. With so many stalls around and the rush of people hyper-scanning what each stand had to offer, this flourish of colour was enough to slow some people in their path). 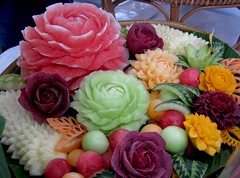 I’d learnt from three important rules from past Fairs:

-turn up early because all the great dishes run out FAST. (I couldn’t make it until 2pm, and of course, Bourke Street Bakery and Central Baking Depot were some of the many stalls that had already sold out of goodies.)
-never buy your coupons from the first ticket-stall you see – you’ll get snagged in a long queue, you’ll feel growly and impatient and belted by hunger. The middle stands are the quickest way to get your voucher.
-do a speedy reconnaissance mission through the whole grounds before deciding what you want. Otherwise, you’ll prematurely blow all your vouchers and still get stuck with food envy.
-the vego options, if they exist, are truly lame and you’re better off just getting lots of dessert.

So after forensically scouring Hyde Park, I decided to lay my coupons down at the The Tea Room stall, a much-loved establishment that has a spot in QVB and also at Gunners Barracks. I ended up with a plate of tea-stand goods: a Finger Sandwich, Chocolate Negress (why do I feel weird typing the name of that dessert?), Orange and Almond Slice, Lemon Meringue Barquette, Viennese Biscuit with Coffee ButterCream and Leek and Gorgonzola Tart. I can still taste that zesty cloud of lemon from the barquette (cutely named because of its boat-shape). It reminded me of how great the high tea is at the Queen Victoria Building. And the plate was the perfect equation of sweet and savoury. 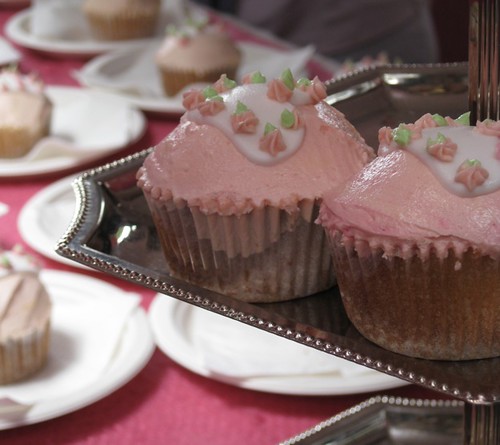 I squeezed through the human gridlock caused by the Slide burlesque/circus show and the Pink Salt cupcake stand (above) and totally got suckered into buying a Delicious showbag. It had a block of Pear Intense Lindt in it, I was feeling weak, it was inevitable.

Before the Fair, of course, I’d dropped by the FBI studio to do my second segment on Weekend Lunch, the FBI radio show presented by the super-talented Anna Burns. (Side note, Anna has a documentary airing on Radio National this Sunday, you can check it out here. It might win an award like her previous effort!)

With all the talk of financial doom and gloom, we ended up doing a segment on budget eating. I wanted to combat the idea that the only way to economically feed yourself was to hole up in your kitchen for three months, slowly depleting a 10kg sack of rice that you bought half-priced ‘cos it was close to expiration.

So I came up with some tips on how to eat nicely and socialise, without making your wallet self-incinerate.

-Eating on a budget is a good excuse to have a pot luck dinner or a progressive dinner party. The latter doesn’t involve coming up with Trotsky-inspired menus, but rather it means having a dinner party that moves from house to house over the space of three courses. So it means you get three dishes for the price of one, a chance to walk (or bike!) off the food in between, and importantly, there’s equal dishwashing distribution at the end. Plus, the fact everyone gets to fuss over just one course means that each part of the meal is definitively kick-ass. And you don’t have the dinner party freak-out that inevitably happens when you decide to invite everyone over for a long and complicated meal. You can relax and savour each dish.

-Picking your favourite cheap and cheery Chinese or Vietnamese joint – the kind where the restaurant budget is definitely not going into the quality of the tablecloths – and inviting lots of your friends to come along, because it will make the dinner extra-cheaper and bonusly cheerier. I remember once eating dinner with a billion people at Sea Bay in Sydney – we ordered enough food to collapse a table, and it ended up only being $10 a head.

-Having half-serves in Chinatown. Anna suggested the budgetary greatness of the half-serve, which you can get at the ever-evocatively named Chinese Noodle Restaurant on Quay St. Getting a fraction of the dish is not only wallet-friendly, it also cures food indecision and food envy!

-Even if you don’t have a lot of money to throw around, you can still splash out on gorgeous bread and it will last you a few meals and still feel special (instead of like budget martyr food, yuck). A very beautiful Potato and Rosemary Sourdough loaf that I recently bought from Bourke Street Bakery added a dreamy touch to a dinner (and breakfast too).

-Speaking of bread, there are some great places dishing out mutant super-sandwiches that are big enough to give you lockjaw (a la The Simpsons). The Seasonal Vegetables sandwich at Kings Lane Sandwiches and Malibu is so big that it sometimes doubles as my lunch and dinner. And it’s not one of those limp “here’s a sundried tomato and lettuce leaf” sandwich affairs either. Crammed full of creme fraiche potato salad, sweet potato salad, snap-fresh snowpeas, eggplant spread, tomato, red lettuce, rocket and enough vegie-architectural stuffing to make it hard to actually grip your hands around, it is value. Anna says you could say the same of South Dowling Sandwiches.

-Sometimes tumbling out of bed in the afternoon can pay off. On a few occasions, because we’ve had breakfast so criminally late and have been the last to leave A Little On The Side, they’ve actually sent us bundling home with raspberry muffins. It’s real kind of them – I guess it’s a win-win situ, because they need to clear their counter for the next day’s fresh-baked goods and well, we get an armful of muffins even if we’re lazy-asses who shouldn’t be rewarded for sleeping in so late. It’s true that mooching around closing time is an easy way to save money in several instances – you can get half-priced food at malls and many other places.

-Eating well and wallet-watching doesn’t mean you always have to be a saint. Some fancy restaurants have bars where you can sample some of their more affordable yet tastebud-stunning items. Bentley Restaurant and Bar has the head-blitzing Gazpacho 3 Ways which is only $11 and their dreamy Toasted Banana Marshmallow and Warm Banana Milk is $6. Which is pretty accessible for a two-chef-hatted joint.

So, avoid the pantry prison sentence of just eating rice, and enjoy!