Here’s how to escape to the country without arguing over maps, stockpiling snacks for the road trip or overthinking which songs should be played through the car speakers. Farmhouse Kings Cross in Rushcutter’s Bay is a shortcut to rural charm that’ll save you on travel time, keep you extremely well fed and, in fact, has a great soundtrack that’ll have you wearing out your Shazam app, anyway.

Even though you’re close to the blare and clubs of Bayswater Road, the rustic feel is immediate as you walk into Farmhouse Kings Cross. The space is small and narrow, but every spare centimetre is cleverly maxed out by co-owner and interior designer Nicholas Gurney, who also serves all the diners. He painstakingly sourced 150-year-old timber to match the age of the building (so the interior features planks saved from wharves in Rozelle; while the fridges are camouflaged by a row of recycled floorboards); he also created the long communal table, which you can flip open at regular intervals, allowing diners to sidle past and sit directly opposite their companion, without requiring them to do a lap of inconvenience around the entire table just to get to the same point.

The food is just as smart, well-thought-out and yet deceptively “simple”. The kitchen is run by two impressive young chefs with just-as-impressive CVs: Mike Mu Sung (Sixpenny) and Tristan Rosier (Biota Dining), who met when working at three-hatted est and have reteamed for a different approach to dining. For a bargain $55, they’ll serve you four courses that they’ll announce via scribbles on their front window. It reminds me a little of The Eat In pop-up in Chippendale, which offered seasonal, market-inspired menus that extracted a lot of flavour from good produce for a similar pricetag in an understated setting. The staff here wants to evoke the feel of enjoying dinner at someone’s farmhouse, where you leave the very opposite of hungry – with no need to go out for a back-up meal or desperately seek a kebab on the way home.

And, wow, are you fed well. One highlight would be the excellent Potato Skins, charred and crisp-thin wedges that are served with thyme-garnished aioli and surely deserve to be the best TV snack ever, if we could raid Farmhouse Kings Cross for a bag of these to go with the next screening of Game of Thrones? The skins share the plate with potato bread – spongey slices studded with seeds and rosemary – that are a clever counterpoint to the skins, and also allow the chefs to use contrasting qualities of a whole potato in one dish (the bread, after all, is made from potato flour).

After finishing off citrus-cured trout with the tang of salmoriglio and the earthy grit of rye (or the vegetarian equivalent with curls of Granny Smith apples); and a salad of confit and roasted heirloom tomatoes, lemony Farmhouse stuffing and spatchcock (or roast potatoes and a zippy, clean serve of kale), your appetite is getting acquainted with its stretching point. It’s all very satisfying, but emptying your plate clean of every crumb and ingredient gets hard as this is no skimpy menu. 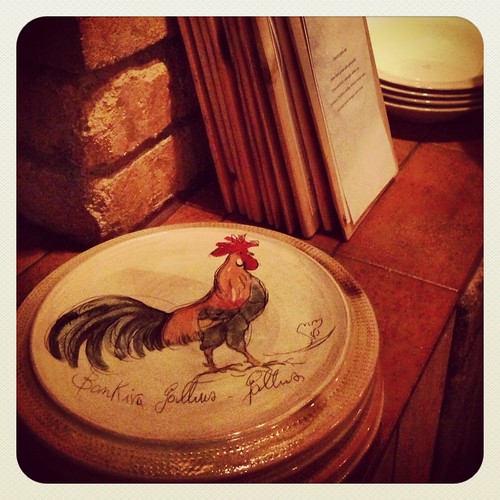 Dessert is excellent: a hidden reserve of cream-cheese cream at the bottom of the bowl really draws out the ultra-spiced flavours of the crumble, meringue and syrup (which are mainly multiple hits of clove, cinnamon, nutmeg and ginger) and highlights the sweetness of the not-so-hidden roast plum on top. It’s a good way to end a meal, even though it’s been a real struggle to fit in every bite (because we’ve hit full stomach-room capacity!); victory laps would be in order, if we weren’t so stuffed.

And in that classic gesture of farmhouse-generosity, even though you’ve happily graduated through your four-course menu (with a little appetite strain), there’s a plot twist: there’s actually more to come! This revelation feels like mealtime deja vu – reminiscent of times you’ve been invited to someone’s place, found yourself grateful for all the beautiful home-style food on offer, but someone (usually a sweetly overzealous grandmother) always keeps pushing more dishes in front of you than you can cope with.

So the surprise last item is actually an apple crumble cake. As brilliant as it looks, I can not face eating the whole thing on my own; the restaurant staff is very sweet and suggests we share a slice. And so, Will and I battle our spoons over this well-baked treat, which is spiced with cinnamon and flavoured with walnuts, and paired with a light dollop of cinnamon cream on the side. Working our way through its consistency – crunchy outer layer conquered, down to its spongey interior – is fun and, leaving hungry is not something we have to worry about at all.

Farmhouse Kings Cross fits 20 at its table and you can hire out the entire sitting if you like. We might need to come back with extra sidekicks to help us take on the generous menu. As a duo though, we like it a lot, even if it did end up supersizing our stomachs. The food, the space, the service and the soundtrack all combine to make for an excellent trip “away” from the city.