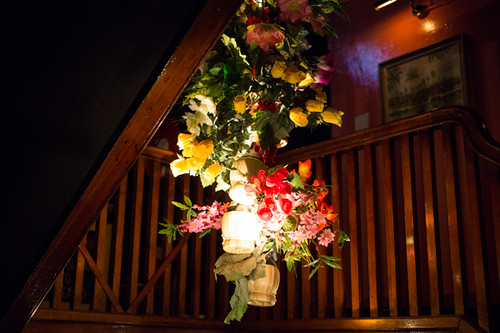 If you’re looking for an escape hatch to Jamaica – you’ll find it at Queenie’s, the new first-floor restaurant at The Forresters in Surry Hills.

It’s a culinary switch-over from the pizza and pasta that was recently served in this space. Credit the change to co-owner Jaime Wirth and executive chef Jamie Thomas (of The Carrington, another pub in Jaime’s Drink and Dine group). They’re hugely into Jamaican food – and the fact it’s a cuisine that Sydney has yet to suffer menu burnout from is a drawcard. 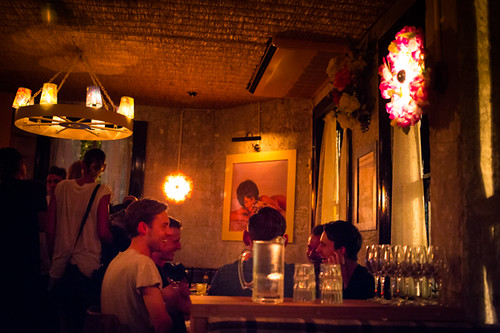 “No one is doing it and we thought – for a space that small – it would work for people to come try something they mightn’t have before,” says Jaime. “We also thought that having this Jamaican joint hidden inside this bigger American-Italian pub would be kinda cooler than doing a stand-alone Jamaican venue.”

Like Jaime’s other ventures (The Abercrombie, Duke Bistro), Queenie’s decor has a whipsmart, fun-charged energy. There’s no shortage of Carribbean-evoking elements – from the flower-mad lamps to the pictures of Miss Jamaica contestants and the ultra-tropical tones everywhere. Among the wildcard interiors, one hard-to-miss aspect would be the ceiling lampshades, which are part of Jaime’s collaboration with designer Mike Delany. “We cut out 3D placemats we bought from a $2 dollar shop and glue-gunned them together – all 48 of them.” 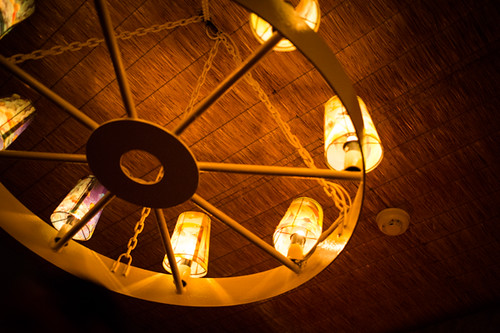 A sense of invention energises the menu, too. There’s a Jamaican slant to dishes – but don’t expect overserious pains to be academically authentic all of the time. There are Kingston Kreme Donuts, after all (and they’re good!). Jerk makes multi-spiced cameos on many items, from the more-please BBQ Jerk Corn ($8) to the classic BBQ Jerk Chicken with Jungle Slaw ($18) and, yes, even that aforementioned dessert. It also appears in the zippy jerk and coconut cucumbers we were given as an appetiser. In fact, it’s like a showdown between jerk and toasted coconut over which ingredient can hog more of the menu limelight at Queenie’s. 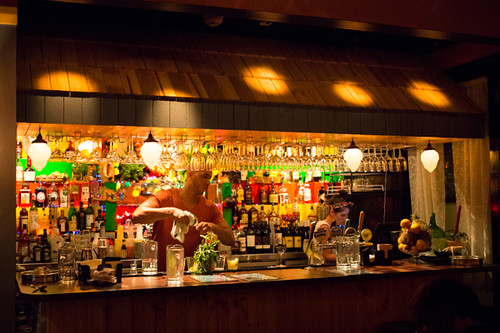 Something that will grab your attention will be the Bammies ($7), which are so unfamiliar that you may want a crash course in what they are before you order. Instead of just giving Google a workout, we called on the staff to help us wise up. We actually ended up being schooled on the topic by Jaime Wirth, who happened to be working the floor. (This was a real surprise – in a nice expectation-levelling way. You imagine someone who runs a successful pub empire to be too lofty to deal with average-Joe customers, but here he was, giving us a rundown of bammies that’d outstage Wikipedia and all its footnotes.) The gist of his description: they’re made of cassava and are like a cross between a taco and a Chinese dumpling. To me, they remind me of a thin slice of grilled, crisp polenta. At Queenie’s, they’re usually stacked with pulled pork and pineapple or a prawn, mango and ginger filling, but sometimes it’s worth asking if a vego version is possible. I was in luck and got rewarded with a bammy topped with pickled peppers, eggplant puree and mango – a delicious, zippy mess full of tang and sweetness.

Also addictive: the Sweet Potato Fries ($9). Crisply coated in curry powder, allspice, cayenne and salt – that dusting of spices over the fries just has a habit-forming power.

While Will was busy with his BBQ Jerk Chicken (which he highly endorses), I was already strategising about desserts. In the end, it turned out the Brixton Mess ($14) was out of commission that night, so we opted for the excellent donuts that you get to destroy via multiple dunks in jerk cream and coffee and choc sauces. The Cooldown Colada ($14) was a more contained mess: a glass brimming with Malibu pineapple, coconut jelly and cherry sorbet so syrupy that it’s like eating compote. 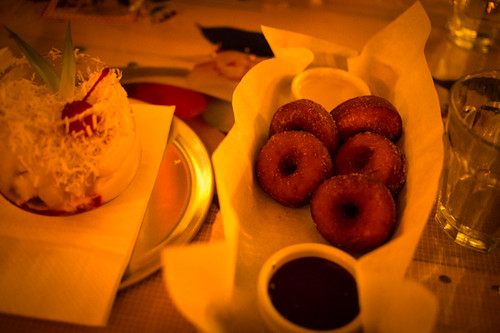 After Queenie’s and its menu of “pan tropical specialties”, it’s a jolt to wander downstairs, back into the world of red sauce, garlic bread and checkerboard flooring. Nice to know that Jamaica is not that far away, though.