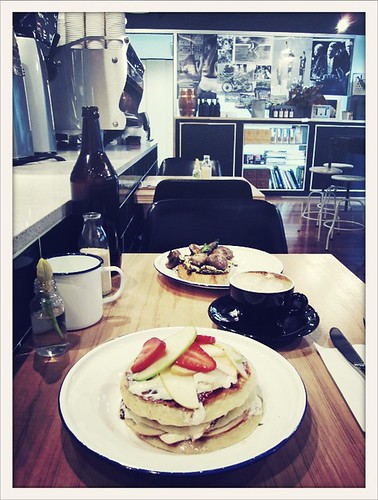 Just when you thought Surry Hills was at maximum cafe capacity, along comes another great new addition: Joe Black.

With a mural showing the evolution of human caffeine dependency, this place takes its coffee ultra-seriously. The blackboard offers two Single Origin special brews a day and a house blend, there are take-home packs galore and you may find yourself sitting near a ditting machine or siphon bar. And besides the usual orders, you can ask for a cup of Magic ($3.50). “Not real magic, just ask”, says the menu. Turns out it’s a 3/4-sized double ristretto flat white; so after a few sips, it performs quite a disappearing act. Hence the “magic”. 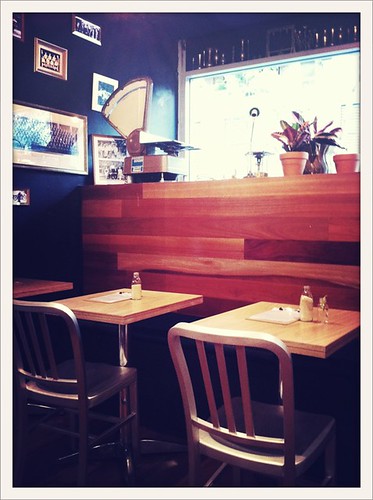 This, I’m told by Joe Black’s staff, is a “Melbourne thing”. And the moustache logo on all the takeaway cups? Another influence from that city, too. It’s a jokey tribute to the fact that many baristas in Melbourne each sport a mo.

And while the two brothers behind the counter (mischievously) won’t own up to who actually runs Joe Black, they will admit that the cafe isn’t named after them. Joe Black might as well be the coffee-toting man in the mural. 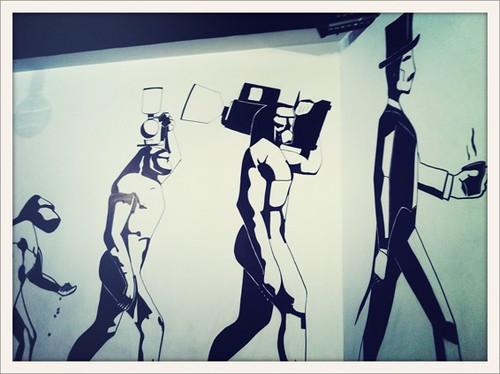 And even with all this talk about a certain caffeinated drink, Joe Black is not so singleminded about roasted beans to forget that there’s more to a cafe than this.

The menu, while currently short, is pretty good (and quite funny). The Pikelet Stack With Stuff ($11), despite its amusingly vague title, is filled with noteworthy ingredients: airy ricotta, a lovely jam-like berry compote and a good topping of strawberry and apple slices. It’s an excellent breakfast option and quite fun to structurally demolish with a knife and fork. (And its greatness estranges it from the dreaded vegie stack of the 1990s, of no flavour relation.) Like this dish, there are other offerings with amusing commentary on the menu: Granola with Diced Apple & Berry Compote (very fancy) ($8.50) and Chivi Steak Sandwich with Graviche (it’s French for yum) ($13). And yes, Joe Black’s Milkshakes (bring the boys to the yard). 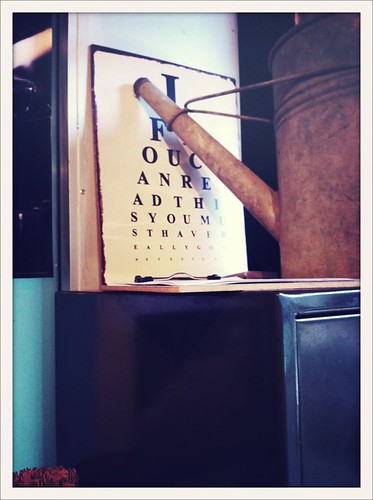 I also really enjoyed the Mushroom & Hummus on Rye – a great vego sandwich. The surprise layer of parsley-flecked mushroom pate just bumps it up an extra notch. And the home-baked White Chocolate & Raspberry ‘Blondie’, made by barista Gemma, is an excellent treat; as you cut into the slice, the raspberry bits bleed all over the chopping board, as a sign of how satisfyingly sticky and sweet it is. 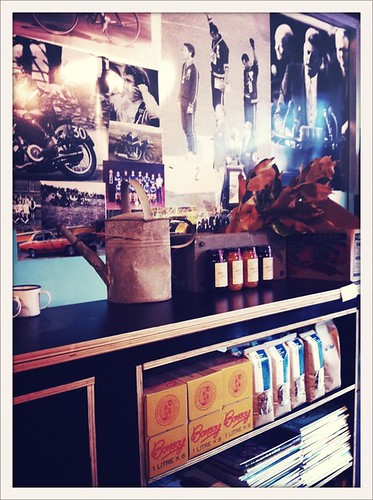 This is just part of the limited selection on offer at Joe Black; surely it can only get better as the cafe expands to a full-range menu? 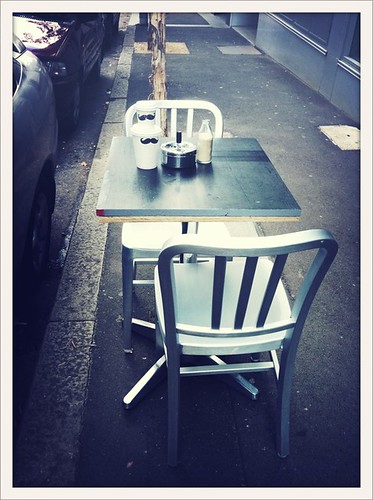 This tiny joint has only been open for two weeks and its likeable approach inspires “hope this place does well” feelings. Besides its fine menu, Joe Black also has wit and personality on its side (how could you not like a cafe where the staff addresses familiar faces as “gangsters” and chooses to decorate the walls with a picture of JFK, an eye chart and a poster of Peter Norman?). We may have only just met, but Joe Black is someone I’d want hanging around for a long time.