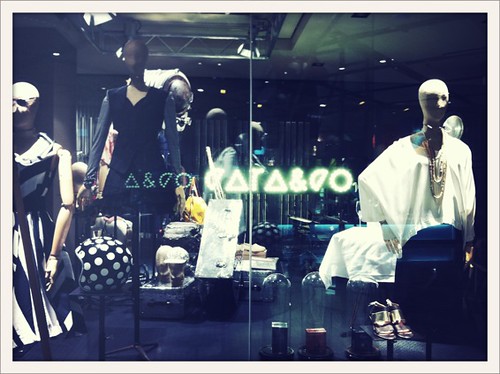 Visiting the Cara & Co restaurant is like trying a spritz of tester-bottle perfume – a few hints are enough to transport you to a place that’s unfamiliar and alluring.

The high-end DNA of this eatery comes from Moscow, where the original Cara & Co store was named “one of the best boutiques in the world” by The Wall Street Journal. Its second and only Australian outlet just opened in Westfield Sydney and thrives off the flipside of namedropping – its “No Logos Fashion Only” motto means its clothing, jewellery and accessories have all been created especially by designer labels, minus the ostentatious branding. 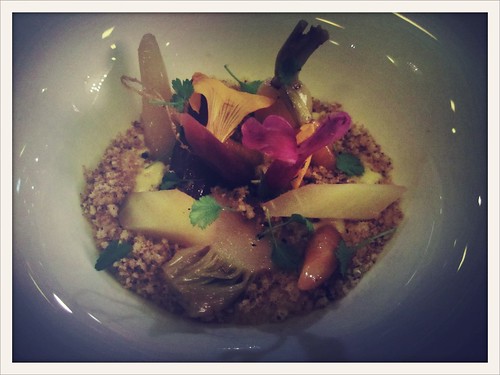 The fashion seeps into the attached restaurant, too, with its looped projections of sulky models taking very expensive footsteps down catwalks, wearing designs that reflect what is on sale in the boutique.

Beyond all this haute couture and its mandatory gallery of perfect cheekbones, the interior has quite a few elements to hook your interest. There’s the glass floor lit up like a disco in neutral mode, the cute rows of mismatching chairs, the blaze of intriguing pendants and a huge, vintage contraption in the corner that has no obvious back-story. “It’s a time machine from Russia,” quips the waiter. (Contradicting this, of course, is this ageing instrument’s plaque containing French writing and a Paris address that I recognise for the least romantic of reasons: rue LaMartine is where, for the price of a few euros, I watched the tumble-dry ballet of my ever-rotating shirt sleeves and pant legs, every rising degree getting closer to the cycle’s finish.) 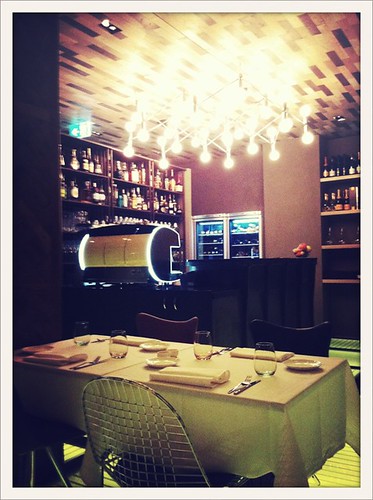 The food at Cara & Co. is witty and adventurous – one dish is called Back To Your Roots ($22) and has baby root vegetables “planted” in soft cheese and a “soil” of textured crumbs. The Devil’s Risotto ($28) is bloodbath-red from all the beetroot juice it’s been cooked in. Cubed apple and horseradish add a sneaky touch (to cut through the beet-rich intensity, the contrast levels could be pushed a little higher on these other ingredients though). The United Textures of Chocolate ($23) is a fun civil war of flavours, with airy chocolate grounded on a hazelnut biscuit base, passionfruit seeds fighting off choc “pop rocks” and scoops of coffee and passionfruit ice cream. This lighthearted mood is conveyed in the names of other dishes, too, such as In Rhubarb We Trust ($21) and The Cheese Trap ($35).

The menu has been overseen by Belgian chef Dave De Belder, who runs De Godevaart in Antwerp and, according to Scott Bolles in Good Living is “tipped to join the ranks of Michelin-starred eateries in the next award season”. With the food, the chef wants to convey dishes that are “typically Flemish but with an Australian touch”. By “Flemish”, he means pure flavour – the instant “wow, I want take another bite” effect; also crucial is a strong dose of visual magic (“people eat with their eyes,” he says) and the wonder of high-contrast textures. The local touch comes through Australian produce (beef, salsify, truffles). And, yes, a Vegemite-inspired dish, is on the cards for the next menu. 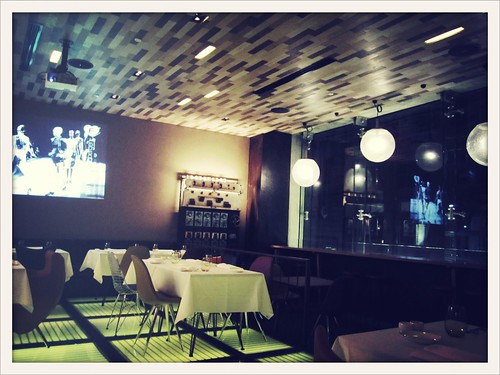 And while both the chef and waiter insist that “there is nothing else like this in Sydney”, ultra-scientific, inventive dishes alive with rat-a-tat flavours are not hard to find here. Think Bentley, Arras, Gastro Park – even Biota Dining in Bowral.

The whole dining experience at Cara & Co, though – with its catwalk video loops, one-of-a-kind design and shared gene pool with a high-end boutique – that truly isn’t like anything in this city right now.

Cara & Co Restaurant, Shop 4001, Level 4, Westfield Sydney, 188 Pitt Street, Sydney, NSW (02) 9226 9988, www.caraandco.com/en/restaurant_caraandco. Finding the restaurant after hours can be tricky – best bet is to take the escalator near Sportsgirl all the way up to Becasse on Level 5, then go one floor down and you’ll see Cara & Co.