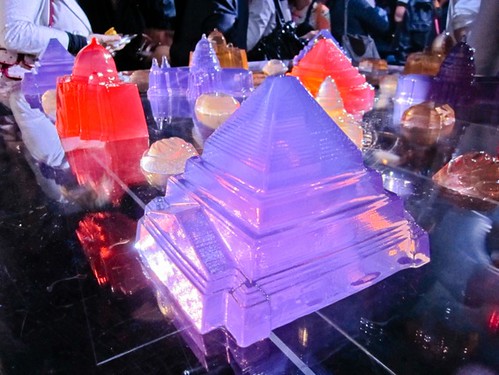 It started with a spoonful of bubblegum-flavoured bubbles. Served to me by someone who looked like an Oompa Loompa returning from ballet school.

This was my introduction to Sweet Architextural, the night that Bompas & Parr and Burch & Purchese recently staged for Melbourne Food & Wine Festival. 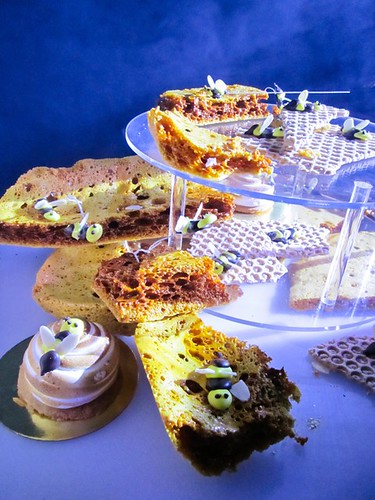 The event was like a dream-sequence directed by Willy Wonka, set in the unlikely surrounds of The Espy pub. The UK jellymongers (who once created glow-in-the-dark jelly for Mark Ronson’s birthday and recently set up a 200-flavour chewing gum factory in a shopping mall) were teaming up with the renowned Melbourne-based pastry chefs, for a night of wobbly, confectionery-powered fun. 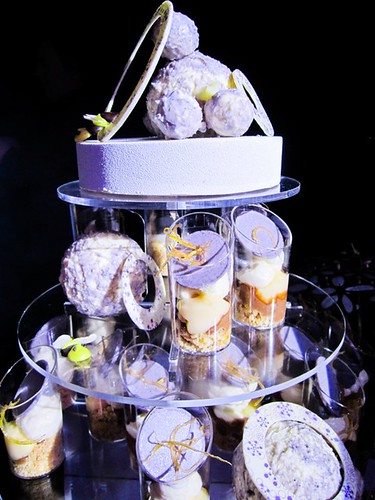 The first part of the event unfolded with their sweets being trafficked through the crowd. Costumed wait-staff carrying giant bouquets of chocolate flowers were tailgated by the room’s hordes and, bloom by bloom, these floral treats were plucked away by guests. (The lemon and raspberry flowers were especially delightful.) Trays of celery-cucumber jelly, Vegemite-and-cheese popcorn, checkerboard marzipan and alcoholic marshmallows all had a high-clearance rate from roving punters. One of my favourites was the “petrified” cauliflower, a dessert where the vegetable had been pureed into a petri dish and sprinkled with sweet crumbs and plonked with a slice of pear. I passed on the foie-gras pastry swans, though, for obvious reasons. 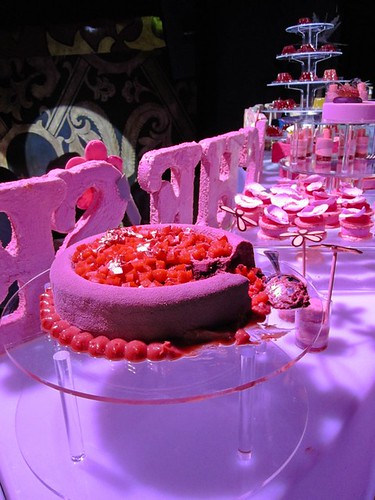 It was also fun to see people pop gin-and-tonic marshmallows (or mojito equivalents) in their mouth, chew, and then watch their faces go “!!!!” as the alcohol hit sudden and intensely. Down one end of the bar, Sam Bompas was unmoulding plum riesling jellies to hand out (apparently the booze makes it easier to loosen); at the other, part of the Burch & Purchese crew was serving scoops of Violet Crumble and bubblegum ice cream. 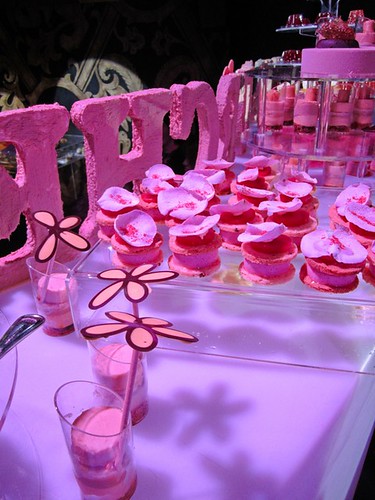 I’d gone to this gig by myself – I bought the ticket ages ago, and the el cheapo plane fare to go with it – and was worried I’d end up in that horror loop of endlessly checking your phone to (shabbily) hide how you really have no company (a well-worn move often followed by the “earliest I can leave without shame” brain calculations). Sweet Architextural was non-stop fun, though, and the atmosphere jolting with buzz and curiosity. You could easily ask a stranger what flavour their oddball sweet was or which hidden corner of the room they had chanced across it. And there was a lot of visual dazzle to be wonderfully distracted by. 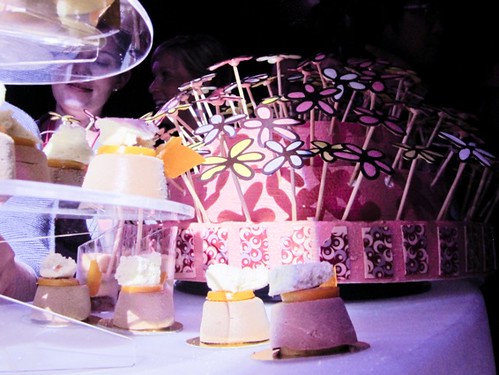 This portion of the night took place in near-darkness (or “snog lighting”, as some Cupid-struck opportunists might call it), so there are zero pics featured here, unfortunately. Luckily, there wasn’t such a dim haze for the final part of Sweet Architextural. Matt Preston came to the front of the room to deliver a speech and then welcomed Bompas & Parr and Burch & Purchese to the raised platform, with the former duo explaining their inclination for bowties (more hygenic than ties, when you’re working with jellies) and the latter explaining how they’ll be “pimping up your pud” when the Burch & Purchese Sweet Studio opens soon in Melbourne. Then, the curtain was raised, and you could see what the four of them had been secretly plotting on, during their previous “72 hours of back-breaking labour”. 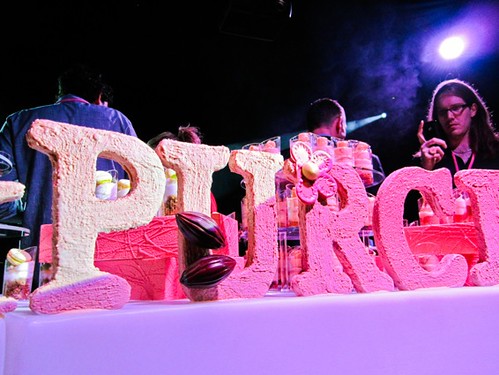 Behind her were some displays of architectural gelatin-set wonders – including jellies in the shape of iconic Melbourne buildings (pictured at the top of this post). 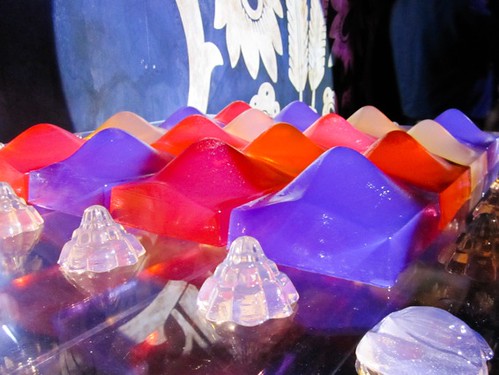 And on the raised stage at the back was a sugar-laced wonderland: generous tables set with staggering, eye-blitzing confections, all fronted by the name “Burch & Purchese” in huge edible letters. There were petal-topped pastries, honeycomb covered in “bees”, domino-shaped sweets, tiers and tiers of jellies, beehive-shaped meringues with (yes) more “bees”, more gigantic chocolate flowers, and the logical extension of choc soil – confectionery “worms” mid-wriggle amongst the dirt. 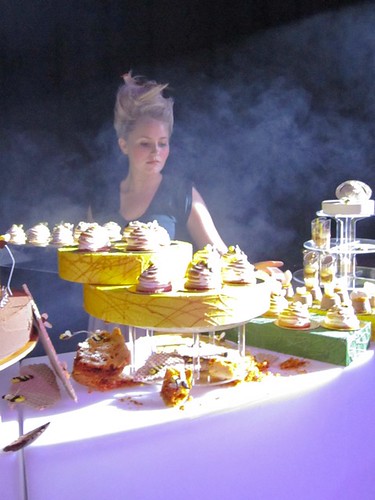 There were plates and spoons aplenty and everyone pushed forward to get their unlimited fill of spectacularly rendered sugar. This once-in-a-lifetime pass to all-you-can-eat sweets was sending my inner-kid crazy, but unfortunately I had already overgorged on the previous array of marshmallows, ice cream, jellies and confections, and could not consume one creamy/frosted/choc-topped/honeycombed bite more. 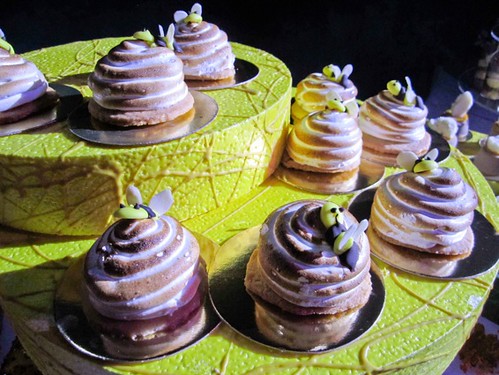 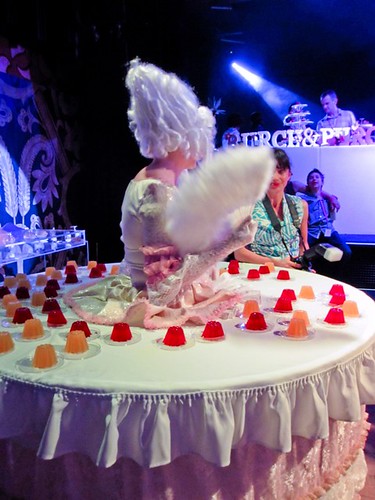 It was a night of extreme fun, rewarding both for my sweet tooth and field of vision. And while Sweet Architextural is over, it’s nice to know that its adventurous, sugar-fuelled spirit lives on with the future opening of Burch & Purchese‘s shopfront in South Yarra. (For a taster, you can visit the pop-up version in Melbourne’s Flinders Lane, but hurry, its expiration date is Friday.) 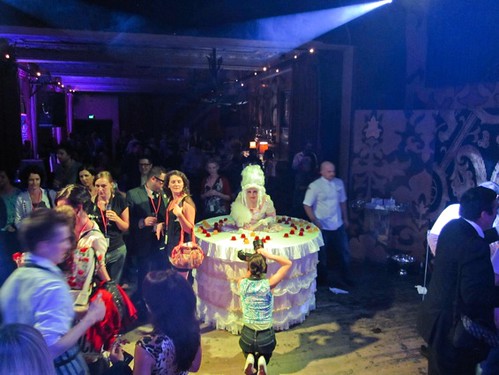 For more on Bompas & Parr, visit the website; for info on Burch & Purchese, head here.