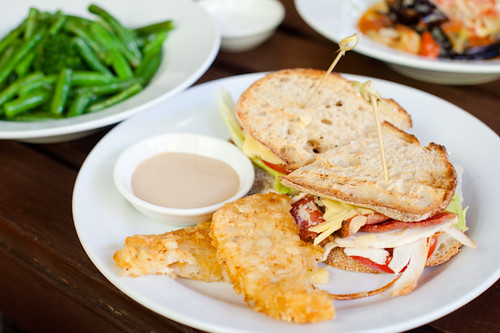 Surry Hills has long been the natural habitat of the upcoming cafe, but, according to last week’s Good Living, Redfern may be (slowly) taking over. I’m always a little dubious when a suburb is pronounced as ‘hot’ – maybe because it sounds like slimey real-estate speak – but there’s definitely case-supporting evidence for this claim. I guess the groundwork for Redfern’s resurgence was laid by Baffi and Mo, Moose General Store (RIP) and Eathouse Diner.

And now there’s The Fern, down the part of Pitt Street that starts to edge onto Cleveland. 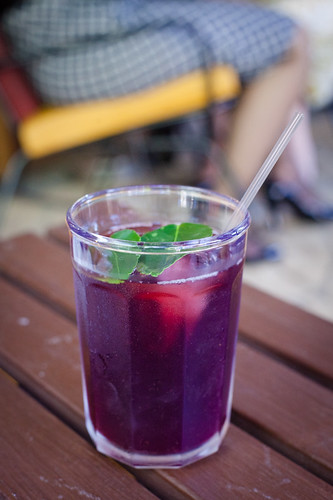 It’s only about two weeks old, and despite the odd case of just-opened-itis, it feels like there is a lot to like about this cafe. The Fern is located in a breezy terrace, with an eccentric jumble of furniture (I’m pretty sure we sat on kindergarten chairs). Even from the courtyard, the truck-rumbling score of Cleveland Street is nicely out of earshot, and that leafy space is a nice spot to be coolly sipping the Hibiscus, Rosehip, Cinnamon and Mint Iced Tea. It’s refreshing to see a drink that departs from the usual banana-smoothie-and-juice line-up at most cafes. (And, yes, I’ve already thought about my next beverage at The Fern, and it’s going to be the Chocolate, Orange and Cardamom Milkshake). 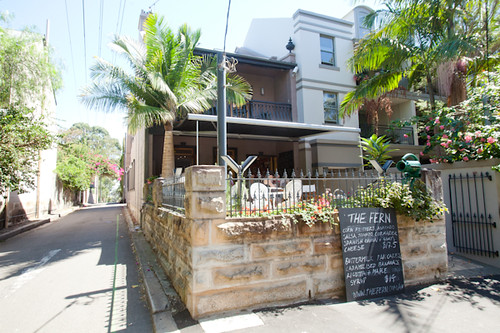 The interior, meanwhile, is like a case of wallpaper hip hop – random samples of visual genres are candystriped throughout: from giant old ads for Pimms and Johnny Walker to newspaper comics and travel photography. This bent for switching things up also extends to the menu, which is presented on vinyl records. 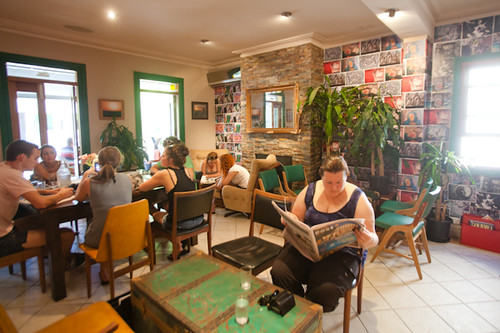 And the food itself is worth some high-rotation attention. The consulting chef is Massimo Bianchi (Uccello, Buon Ricordo), which explains the Italian-inflected lunch offerings – like the rather ace Eggplant with Tomato, Provola and Parmesan ($14.50), which sounds like a boring sandwich filling from how it’s presented on the menu, but is actually a brilliant eggplant parmigiana, with the smoky-rich provola giving the dish a good jumpstart. 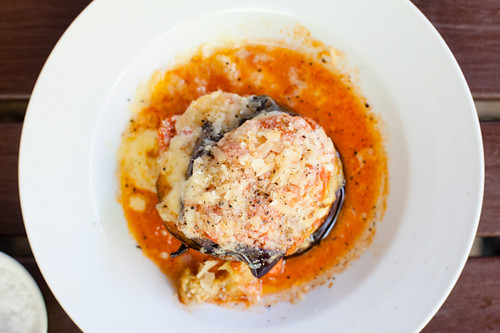 Will enjoyed The Fern Club Sandwich ($17), which banked in a good amount of flavour (roast chicken, bacon, iceberg lettuce, aged cheddar, Roma tomato) without being an overly big, impossible-to-bite-into stockpile of fillings. Instead of hand-cut chips, there was a serve of hash browns instead (the kitchen had run out of potatoes), which is part of the quirk of a new cafe, I suppose. (This lack of spuds also meant we couldn’t try the Crushed Potatoes with Pesto, alas. Next time.)

Speaking of things that were off-limits, unfortunately for an unreformed sleepyhead like myself, The Fern ends its breakfast menu at 11.30am. I guess the lazy policy of all-day weekend breakfasts at most cafes has spoilt me and I need to learn that midday is not always a respectable time to have your first meal of the day. 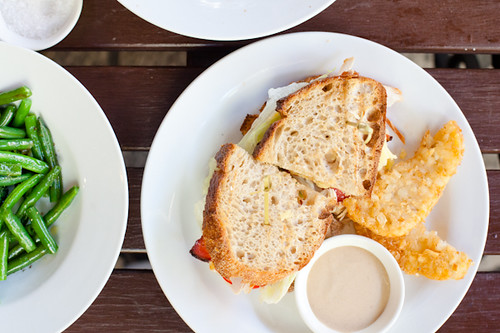 And we’ll also revisit when the crew behind The Fern (Julian Serna and Mark Wiley, ex-Merivale staff) get a licence and start running services at night. The main upshot is that we’ll be back.