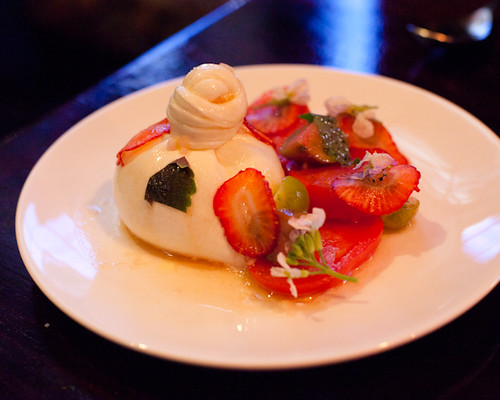 When Bloodwood opened earlier this year, and everyone rushed to declare “casual dining” as the hot new thing in Sydney, I felt a tad skeptical. Bloodwood is great, but can a trend really exist when Exhibit A only holds one example? Well, since March, we’ve seen the opening of Berta, Eathouse Diner, District Dining and now Duke Bistro, which proves the forecasts to be resoundingly right (and my boring, overcautious self to be wrong). Not that I really mind – these are all excellent places to eat my words.

Duke Bistro has only been open for a week, but if you’re a culinary trainspotter, you probably would’ve known about it for a while, given its impressive line-up (commanding the kitchen are Thomas Lim, ex-Tetsuya’s, and Mitchell Orr, 2010 Josephine Pignolet Young Chef of the Year and formerly of Sepia; service-wise, there’s Kylie Javier, who used to be front of house at Bentley, to name a few of its A-team). 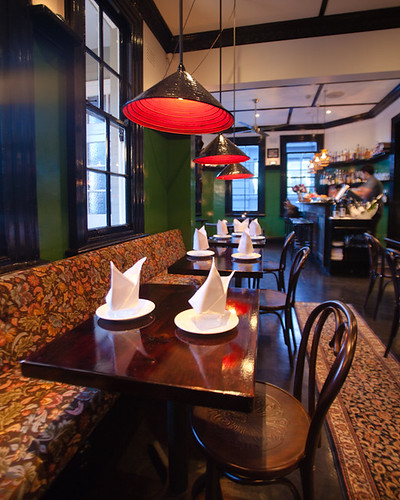 The restaurant, which is upstairs from the Flinders Hotel, has a whipsmart feel to it – everything from the menu to the decor is sparked by invention, wit and a livewire element of fun. There’s the Tomato, Strawberry, Burrata & Shiso ($15), a dish which already has netted itself an online fan base, and understandably so. Pitting these odd dance partners together is a fine gamble – the creamy/clean cheese, sweet strawberry and jolting tomato end up busting some good moves together. 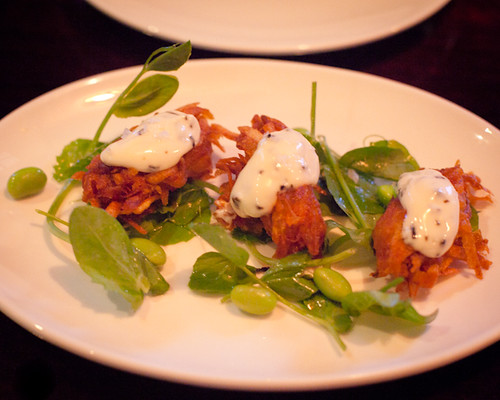 Unmissable are the Tater Tots with Edamame ($15), which are feisty takes on a cafeteria/frozen-food staple. At Duke Bistro, these spiky-crisp potatoes are more like mini rosti, full of loud, golden crunch. Usually drizzled with house-made gravy, my serve comes with yuzu and konbu mayonnaise – a zippy and beyond-satisfying vego alternative.

Duke Bistro is impressively considerate about vegetarian options – for instance, when serving the Egg, Seasonal Mushrooms, Almonds ($15), the staff puts the dashi in a (cute) beaker on the side, so Will has the option of tipping the fish stock onto his portion, while I can steer clear of it altogether. And can I say, even without the dashi, the mushrooms are amazing? I’m not sure what the secret weapon is (loads of butter?), but the chefs manage to unmask so many exquisite flavours from the medley of enoki, cloud ear, snow fungus and oyster mushrooms. (Also, the idea of paying only $15 for such a high-grade dish is something of a mind-spinner.) 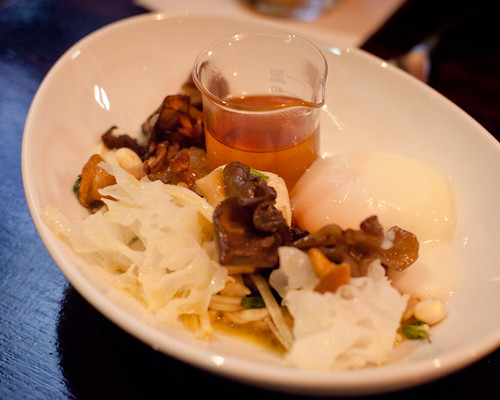 As for Will’s Lamb Belly with Cumin, Eggplant, Pearl Onions ($16), he likes it so much that he probably set some kind of land-speed record in finishing it.

Being a tragic sugar fiend, I ask to see the dessert menu right at the start, so I know to be prepared for the Knickerbocker Glory ($12). This glass-full of yum has layers of mango jelly, rhubarb, beetroot meringue and panna cotta ice cream. As much as I like it (enough to repeatedly bother the poor staff with the details), I think I would’ve preferred it with the standard strawberry instead of the understudy ingredient, rhubarb. 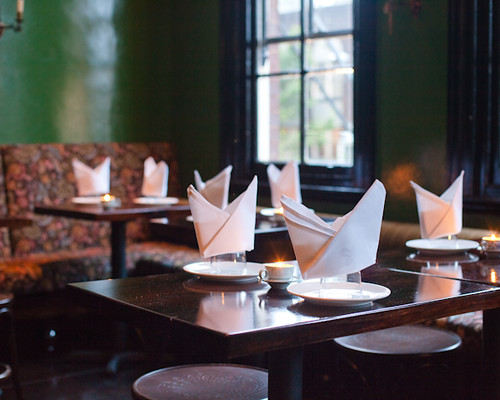 Menu aside, I also enjoy the decor at Duke; instead of shedding its pub past with some overslick new refit, the bistro adds clever instances of upcycling: there are candle holders created from teacups; lampshades made out of everything from beer bottles, bird cages and traditional conical Vietnamese hats (repainted in shiny, eye-catching jolts of black and red).

The staff are also brilliant – the right level of friendly, enthusiastic (but not salesman-like), menu-savvy, approachable and good-humoured.

Hell, even the cutlery (by Studio William) is cool. And when your bill arrives, it is safeguarded by two mini macarons (which are eaten in a flash). What’s not to like?

Note: Sadly, Duke Bistro is now closed, but you can find former staff members doing great things at 121BC, Momofuku Seiobo and Pinbone.

Upstairs at the Flinders Hotel (you can enter directly from the street level), 63 Flinders Street, Darlinghurst NSW (02) 9332 3180, www.dukebistro.com.au