Pinbone in Woollahra is a sharp, fresh shot of oxygen to the local dining scene. By taking over the old Buzo site, this establishment does more than just hit the reset button. Chefs Mike Eggert and Jemma Whiteman (Billy Kwong, Three Blue Ducks) and front-of-house whiz Berri Eggert (Cafe Paci) manage to sneak in redefinitions of what to expect. Yes, they have serious fine-dining cred, but they also front-load the menu with snacks inspired by kids’ parties. There’s a dedication to sourcing interesting natural wines, without any overblown delivery of the drinks list (“fizzy shit” is the sharpshooting way they describe the sparkling options). And just when you’ve got this ambitious restaurant pegged, it eases gears on Sundays, and becomes a laidback cafe that offers lots of reasons not to skip breakfast.

The service, too, is smart and spot-on, but also friendly and good-humoured (I rang up to prospect for details about the Sunday brunch and find out when would be the best hour to turn up. “Any time after you’ve woken up,” was the quick-witted response.) 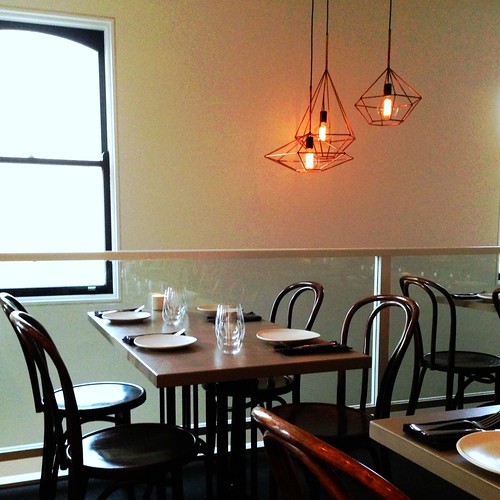 This fun streak lights up the whole menu, particularly the snacks section. There’s Fairy Bread ($4) that isn’t an oversugared exercise in carbs and food dye, but a mascarpone and roe combo influenced by the classic American bagel with lox. Chocolate Crackle ($4) comes with a surprise dose of chicken liver parfait. Expectations are also flipped with the Lamb Ribs ($5), which Berri says exist purely because the chefs wanted something that looked like a Golden Gaytime ice-cream. While it’s not something Will would ever want to pull out of a freezer, the flaked ribs are something that he’s very happy to tackle when served hot on a plate at Pinbone (they also have the bonus of not melting, too). And while they are truly excellent, they’re yet to knock off his full-reigning favourite – the ribs at 121BC in Surry Hills (funnily enough – Pinbone’s Crabstick has an origin story that begins with 121BC’s Giorgio De Maria; what you’ll find at this Woollahra restaurant is the chefs’ tribute to a dish Giorgio once made for them at a dinner party).

On our first visit, there wasn’t a vegetarian snack on offer, but that was quickly and brilliantly rectified (on visit #3) with the Smokey, Potatoey, Cheesy Thing ($4), which sets the gold standard for taking what’s awesome about cheese-melted carbs and blowing that up to the next level. Here, potato ‘shells’ are salt-baked, scooped out, deep-fried and then gloriously married with a smoked gruyere and parmesan sauce. Just to top out the health-disregarding elements of this dish, it’s also sprinkled with a smoked salt from Levins of The Dip. Unless artery maintenance will be a major obstruction to enjoying this, I highly recommend the Smokey, Potatoey, Cheesy Thing.

The larger “to share” plates retain the inventiveness of the snacks, even if the influences might be a little more grown-up. Simplicity does feature on the menu: Raw Zucchini, Pecorino and Lemon ($12) is literally just that, while a high-comfort Chicken ($28) dish uses garlic, kale and chewy frills of white fungi to offset the savoury punch of the chargrilled chicken and dashi. But the dishes that circuit-break convention stand out the most. Dan and Will both named the Pork & Pineapple ($28) as an outright favourite. Any dish with instructions is always fun, especially when you’re told to dive right in; with this, you pick up roasted pork chunks and “ash” them in a liquorice nori seaweed salt, add grilled pineapple rings and round it all off with a palate-resetting salad of herbs. The dish has an unorthodox backstory, too. “The idea for the grilled pineapple pieces came from watching a legend in Mexico carve up grilled pieces and flick them with a knife into tacos in his other hand,” says Berri. Other inspirations for this number include flashbacks to ’70s food (ham with pineapple on toothpicks, anyone?) and the salt-dipping is a clever way to sneak in an interactive element to the dish.

One of the best desserts I’ve had this year has to be the Blueberry Granita with White Pepper Parfait and Pine Nut Brittle ($12) at Pinbone. The lively clash of flavours – bracing ice, tooth-clomping nuttiness and wildcard pepper – is designed to jam your brain and overtax your senses in the best way possible.

Also really clever is the Apple, Bay and Cider dessert ($12), which gives you a two-fold way to enjoy the same ingredients. The fruit is browned off with bay leaf and cider; one half of this mix is frozen and the other is aerated and dehydrated. Despite the same origins, the two high-contrast parts play off each other in unusual ways. The cool part is like ice-cream, while the dry pastry-like “shards” are served on top and the effect is like eating a delicious, space-age apple pie.

Another note-worthy aspect about Pinbone is that it has a lot of inspired vego, vegan and gluten-free options – and you’re safe from resorting to the cliched fallback dishes (dietary-restricted diners will be served something worthwhile and interesting, and not a mushroom risotto). Our friend Cybele asked for a vegan dessert and the kitchen came up with an off-menu creation that was as flavour-blitzing as any of the best sweets on offer.

And if you head to Pinbone after waking up on a Sunday, there’s more than the usual brunch menu suspects on offer: Fregola with Creamed Corn and Poached Egg ($18) and Bacon, Maple and Pumpkin Tart ($8) are worthwhile picks (although, if muesli and toast is your thing, that’s covered, too).

The name ‘pinbone’ comes from the small bones that chefs have to meticulously pull out of the fillets when they prepare the fish. “For us, it stands for the eye for detail and the precision involved in cooking,” says Berri. At their restaurant, the team has nailed the elements both big and microscopic. Pinbone is definitely deserves multiple visits. Any time after you wake up should be fine.