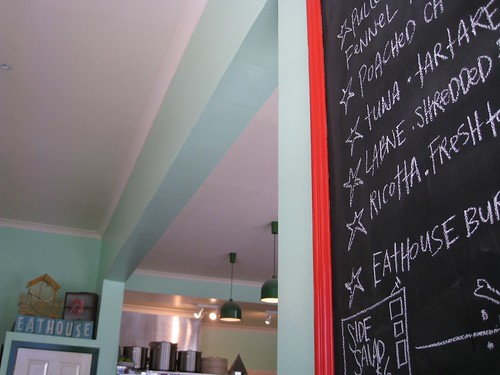 During yesterday’s hoodie-plus-coat weather (with its bonus blasts of hair-tangling winds), I sat at the bar of the new Eathouse Diner eating a Chilli Sans Carne. The spiced stew of beans provided some smoky warmth (and also led to a few wimpy ‘this is hot!’ pauses). I mashed in the half-avocado that you get to cut yourself, dunked in dollops of sour cream and pitched in corn chip after corn chip, until the point where only a spoon can finish off what is left. For company, I had a mug of sarsaparilla – one of those bar-shy drinks that’s a bit to find, but something I immensely enjoy when I discover it on a beverages menu. I left, wishing I had room for the Banana Split, despite the outside chill. 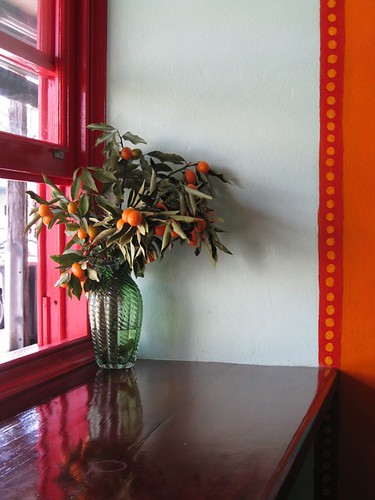 Today was all T-shirt weather – a bizarre about-turn in temperature, but perfect for lunch at Eathouse Diner. I sat by the window, with its rewarding breezeways and sunlight, with a glass mug of icy ginger beer, a flavour-jammed sandwich and great book. It was one of those moments where everything conspired to be awesome. 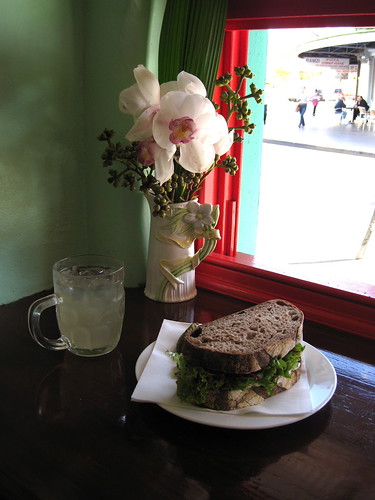 My return to the diner partly had to do with the Borscht with Hot Potato and Sour Cream ($13) that I saw on the menu last night – it’d sounded so tempting then, but now – when you were turning the nearest sheet of paper into a makeshift fan, feeling pretty dumb-ass about bringing along a back-up jumper and worried about incidents of untoward sweating (a paranoid feeling that’d been dormant since February) – the desire to order beetroot soup seemed kind of misplaced. 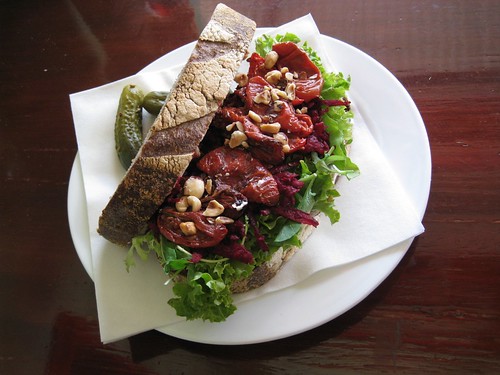 I did get my red-veg fix, though, with the lovely Labne, Shredded Beetroot and Roasted Hazelnuts ($10) on Sonoma rye sourdough. I like how labne has gone from an obscure reference on The Simpsons (“now that’s good labne!” says Bart, to impress a girl with worldly food tastes; gourmet props to Conan O’Brien, who penned that ep way back in 2004) to a cafe regular, a stand-in for sour dollops of yogurt or salt-screechy smears of goat’s cheese. The labne is made by Eathouse Diner, and its mild tang folds in well with the hazelnut crunch, sun-dried tomato jolt and fresh beetroot. This is a nice sambo, but if you’re prone to turning your sandwich into a landslide of fillings (as I am), this might not be entirely compatible with wearing a white shirt. 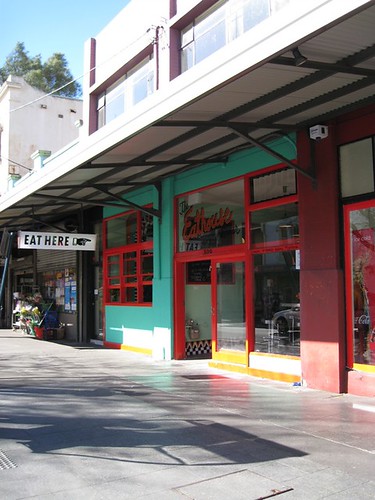 The breezy feel of the diner was so nice, I stuck around for another drink – the Blood Orange Juice that the bar folk hand-squeeze themselves.

So, somehow I’ve rambled this far without pointing out that Eathouse Diner is run by three friends, Age Durrant (who has worked as a chef at Sean’s Panorama and Longrain), Selena Murray (previously a manager at Fratelli Fresh) and Lenna Boord (whose background is styling), and it’s located on a low-key corner opposite Redfern Park. My limited camera skills don’t really show this, but the space is full of retro character, filled with colourful knick-knacks, bizarre masks and old-school pendant lights and bar stools. It’s the kind of ’50s-style hang-out that movies dream of conjuring up.

On the weekends, the eatery will also be open for a South-American-inspired brunch. But if you’re hanging out to try the banana split (as I am – can I blame Betty & Veronica-inspired nostalgia?), you’ll have to head there during the evening. And given Sydney’s crazy at-whim switches from cold to sweaty, I hope it’s a weatherproof dessert.*

*I recently got to try the banana split, which placated my Archie–reading nerd past, but now I’m smitten with the excellent Mexican rice pudding – even if it comes without a festive mini-umbrella and comic-book cache.