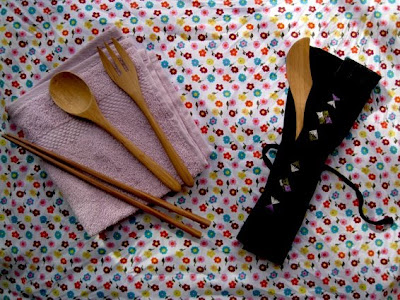 Sometimes it is really hard to tackle big serious topics without people zoning out and falling victim to a sudden epidemic of watch-checking. So I was really inspired by my friend Ebony’s approach to World Environment Day last week. You can read up on some of her many great deeds at her Hello Sandwich blog.

Ebony didn’t go for finger-waving or stern-lecture-giving, but she didn’t sugar-dust the facts either. She organised a talk by Al Gore Climate Project Ambassador and Dinosaur Designs’ Liane Rossler at our work (which was pretty well-attended, given everyone was missing lunch for it). It really was great and inspiring to have someone well-versed in the facts to remind us what lies ahead if we really don’t do anything about global warming. I can see how easy it is for people to read about the scary scenarios presented by dangerous climate change (the increase in more extreme weather events and wildfires, the damage to ecosystems) and feel weirdly immune, treating it like the plot of a disaster movie that will eventually go away.

I think that’s the toughest thing, trying to do something about it when there’s a huge crowd of naysayers trying to outblare any facts about the issue. Scarily enough, Senator Steve Fielding recently attended a climate change conference run by an institute that believes the dangers of smoking are based on “junk science” and as a result, the senator no longer believes that humans are behind global warming, the Herald reports. It’s pretty frightening when someone who has the power to block/amend legislation about environmental policy chooses to listen to people who say “‘Steve, do you know that over the last decade carbon emissions are rising but global temperature isn’t rising?'”, even though 13 of the hottest years recorded occurred in the last 17 years – and the likelihood of this happening by chance is 1 in 10 trillion according to New Scientist magazine, showing that there’s “a very high probability that human emissions are causing global warming”.

(Also, I’m not sure why we are still toing and froing on this topic because in 2007, a series of reports by the UN Intergovernmental Panel on Climate Change [IPCC] concluded with 90 per cent certainty that human activity was behind climate change. It was a finding that was reported around the world and earned the 2500 climate scientists a Nobel Prize.)

OK OK, I didn’t mean to have a fact smackdown here, but it is hard not to get smooth-talked into believing some vague, unverified climate change skepticism unless you keep slinging these scientific details in defence.

Anyway, I think I’m floating away from my point a little. What I wanted to say was this – that it’s hard not to be disheartened by all the political squabbling and feel that nothing major will happen about such a serious topic. But it’s people like Ebony that remind you that you can approach the issue in different ways, even if they seem pretty low-key. 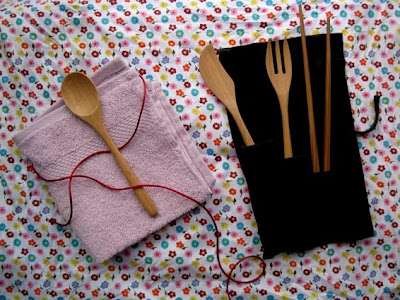 At the talk, she gave away all these really heartwarming lucky door prizes – like bento boxes, potted herbs and linen napkins – to remind us of small things that we can do. I think that’s one of the image problems of the environmental movement, it’s seen as pretty joyless (all cold showers and tasteless muesli), and Ebony reinserted some wonder and warmth into a topic that can be pretty cold. Her pile of fabric-wrapped presents were all a reminder to re-use, recycle and rethink the way we go about our lives. I was pretty happy to have won a little face towel, with a cute hand-written tag that said, “Towel Dry! Embrace the Japanese tradition of carrying around a towel in your bag to use for drying your face and hands instead of tissues that are used and thrown away!”

It reminded me of being in Vancouver with Beth and Jeff and how we went crazy for the portable fabric fold-up cutlery kits, which each had a bamboo fork, spoon, chopsticks and mutant not-quite-knife/not-quite-spoons tucked inside. They were made by Burmese female refugees (I know, could you get any worthier!) and were great for carrying to Japanese restaurants which have a bit of a shameless reliance on disposable chopsticks.

I am a bit hopeless and sometimes forget to pack mine in my bag but lately, I have started to put it in my reusable spotty lunchbag (which is where I will also store my new mini-towel!). 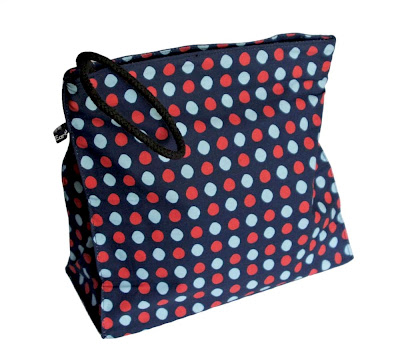 I know that major things have to be addressed and a big problem like global warming can’t be solved by me toting around bamboo chopsticks or having one oregano plant on my balcony and patting myself on the back for it, but I still applaud Ebony, because she got people re-engaged in the subject through clever and inviting ways and that’s a key thing. When people lose interest, they are not willing to change anything.

I know it might seem weirdly non-food-blog to bring this up, except that so much of the environment is affected by food – when you think of how we source what we eat, the energy and costs to the earth of producing our meals, and how the scale of our carbon footprint can be shrunk or magnified by what we have at the table.

Plus, I really just wanted a shameless excuse to show off my cool prize and bamboo cutlery!

Anyway, I shouldn’t sound too worthy because there’s always more we can do but sometimes things that sound killjoy are surprisingly easier than you think (I am going for my third winter without a heater at home and my Origin green-powered energy bills actually are less than the normal electricity rates I used to pay). Now, if someone can convince Japanese restaurants to cut back on disposable chopsticks … and get Senator Fielding a few key copies of New Scientist magazine and the IPCC report for some light reading.