Sometimes you like a cafe from the very first millisecond.

And then – several cleared plates, sipped-clean glasses and much cafe-lingering later – your initial instinct is proved right.

So here it is, Clipper Cafe in Glebe, my latest big cafe crush. OK, so I didn’t quite stumble into this cute little terrace eatery by accident – I got a nice tip-off from TwoThousand’s Nadia Saccardo when I was quizzing her for my zine about Sydney. She named it as one of her city faves. 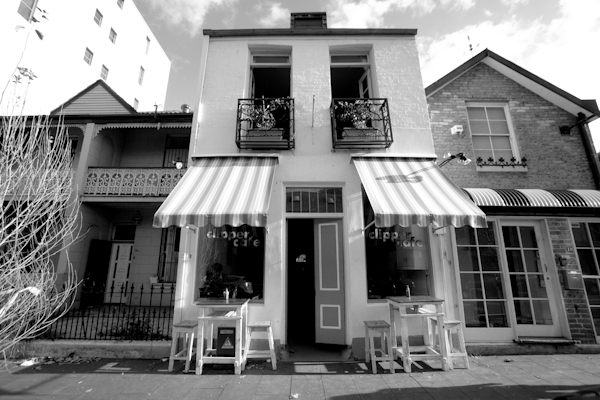 Unlike a normal crush – where you have to put on a cool front to the subject of your affection (so you don’t freak them out entirely) – I’m pretty happy to gush about Clipper. I like sitting near the light-choked front windows and watching the flurry of people down Glebe Point Road. (Although this is kinda weird if someone else is sitting on the other side of the pane, and you both have to pretend you’re not looking at each other, like a strange piece of amateur pantomime.)

It feels like the people behind Clipper have this direct feed to the minds (and wishlists) of cafegoers, because they’ve nailed all the small but important things that make you want to keep returning.

The space is intimate but not cramped, and sprinkled with lots of character: bikes pinned to walls, bits of art and quirky paraphernalia and recycled bottles used to pour water (redecorated with Clipper stickers – which there are rolls of everywhere; you can take a sticker or two as a souvenir). It feels personal – more like someone’s eccentric living room – than a matter-of-fact business.

Of course, the food is pretty important too, and the chalked menu earns stars in all the right areas: it’s affordable, clever but still comforting and real decent.

On my first visit, I had the Baked Beans, Haloumi and Herbed Bread ($10): a brilliant start to a cold morning. It came in a cute glass casserole dish – the haloumi mingling in the savoury-sweet bean mix – and the bread was buttery perfect: all herb-flecked and full of crunch.

When I dragged Will to Clipper, he had the Poached Eggs with Capsicum, Pesto, Spinach, Fetta and Dukkah, which he pronounced awesome from first bite. (I originally paid him out for ordering “just poached eggs”, but I had to take that back when I saw that this was an adventurous take on the boring breakfast staple. And after swiping a bite or two, I had to agree, it was pretty good.)

I had to have the herbed bread again, but chose to pair it with the Baked Eggplant with Napoli, Fetta, Spimach and Fennel and Sumac Breadcrumbs this time. This was definitely cold-weather food, with a strong salty hit. I feel like the fennel and sumac crumbs got a little punched out by the other flavours. Still, I like how Clipper offers something beyond the well-worn eggs-and-sides routine.

I have my eye (or stomach) on soon trying the Sourdough Platter with Hummus, Tomato, Ricotta, Eggplant ($8.50), which is sort of like an Ikea dish: build-your-own brunch, minus the strange Swedish assembly instructions.

Beyond the savoury menu, Will and I sipped on summery drinks (I’m always a fan of any place that offers Watermelon Juice) and even splurged on ‘bressert’ (breakfast dessert): Sour Cherry Bread with Berries, Honey and Ricotta ($7).

Even though bressert isn’t quite the same in cold weather (simply because most ‘bressertworthy’ fruit is out of season), it was still fun to go halves on this berry-stacked dish. (And $7 seems a bargain for it when some places charge so much for just no-frills fruit toast or banana bread.)

I also have to mention my full-beam enthusiasm for the staff. I had a very cheery fellow serving me on my first visit and more recently, our waitress was Helena, who was awesome and friendly. When she suspected my food blogging intentions, I was worried she might get all funny about it (people can go into this deep-freeze unfriendly mode when they discover you’re a food blogger). But she was lovely and understanding about it, pointing out that’s how people often find out about cafes.

And it turned out Helena was a food-blogger-in-waiting (she has a great blog name – which I won’t out – she’s just perfecting her content before she launches). She’s also studying to be a food writer. We actually had fun gossiping about food mags and how shallow and disappointing some of them can be, especially when they keep recycling the same recipes (do we really need to see another predictable mushroom risotto as the ‘vego option’ in a magazine?! Culinary cattiness is addictive!)

And though he doesn’t actually work there, we also met Troy – Clipper’s unofficial resident DJ. He donates his CD stash to the cafe (which has an impressive selection – being a music nerd, I had to get my browsing thrills: I spotted New Buffalo in the pile and Will instantly bought the Tallest Man On Earth album after hearing it slipped into the stereo by one of the other waiters). We chatted a bit and found out Troy studies medical research, specialising in pain (he said we wouldn’t want to know how low the efficacy of some painkillers are).

Even though Clipper has only opened fairly recently (it was 8 weeks old, on that particular visit), the fact that it draws dedicated cafegoers, who are willing to share their musical collection, tells you something about its infectious vibe.

Oh and its easy-to-remember opening hours – 6am-6pm, 7 days a week – are a nice invitation to explore beyond the breakfast menu.

And to tenuously link it back to my cheesy Cupid-inspired cafe metaphor in the intro, I’ll end with this …

Crushes have a funny way of realigning your universe and I’d say that Clipper is definitely worth adding to your regular orbit of cafes.