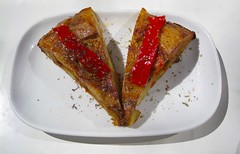 It’s nice to have a place that you can think of as a lunchtime lifeline. The kind that’s worth the extra walking distance, worth blanking out the convenient eateries more closely located, worth becoming momentarily amnesiac over how much you really should be spending on a workday meal. The kind that jacks up the rest of your day a good notch or two. 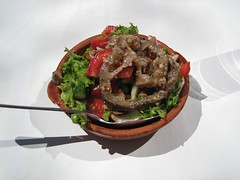 For me, the Bodega Cafe in Surry Hills is that place. It’s the daylight cousin to its ragingly popular evening equivalent – Bodega Tapas Restaurant, run by Elvis Abrahanowicz. The lunch canteen has a more casual menu and is run by his parents, Hilda and Adan. Hilda is super-sweet – sugarcoating all her conversations with “darling” and other genuine endearments. She remembered that I was vegetarian after my first visit (even though I’d never even tipped her off on that fact) and was always suggesting off-menu flourishes she could serve me if I wasn’t so into what was available.

Of course, I’m totally into what they offer and I can’t stop ordering the same three things whenever I go in. There’s the obligatory Spiced Pumpkin and Feta Empanada ($4), which is also on the night-time Bodega menu. Then the awesome Tortilla Espanola ($6) – peppery, sweet and topped with two ribbons of roast capsicum. It’s nothing like its Mexican flatbread namesake, but similar to a fritatta – without the overpoweringly eggy taste. The ever-crispy golden potato chunks wedged inside the tortilla are the not-so-hidden stars of this dish. Crunchy, perfectly fried potato is a dreamy thing, worth the inevitable guilt (and worth the “guilt salad” I order to make up for it). 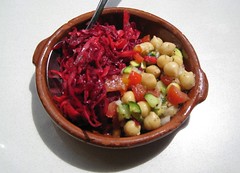 And this is where the menu gets fuzzy. There are three salads on offer – red cabbage, bean or potato – but they’re always fast-gone before I get there. The potato salad must be like the first-row tickets to an an impossible-to-get-into concert, because it never seems to exist.

In fact, my question about it is almost like delivering a line from a play (“Do you have the potato salad today?” “Sorry, darling”), with the dialogue repeated according to script, ending in the staff adlibbing on what they can offer. It’s the kind of place where, even if they run out of things, they’ll come up with a good stand-in instead. Sometimes I’ll ask for a salad with pickled eggplant (if I feel like something tart), while today I got a potato salad consolation prize – it was piled nicely with crispy fried potato. I love that the salad was meant to erase my guilt, but only compounded it. I guess I’ll have to have a potato-guilt amnesty to make up for it.

The only drawback about Bodega Cafe is that it’s only open for two hours a day (from midday), and items can sell out before closing time. But there’s an easy remedy for that. Go early and go often, as they say.