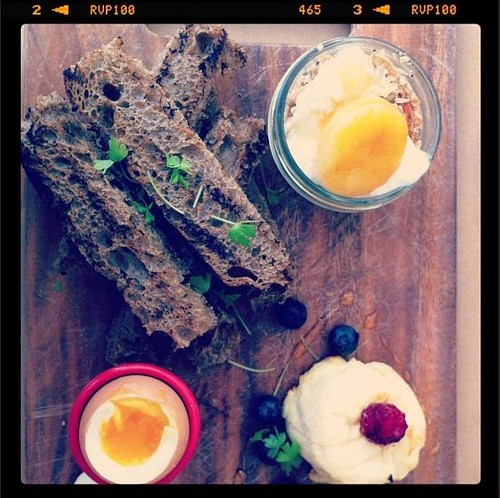 From the people who used to make your weekend breakfast great when they ran Baffi & Mo comes … weekend breakfast at Orto Trading Co (a new thing, even though the restaurant has been open since April). Zero surprise: these guys still know how to nail that first meal of the day. You can order good ole eggs and sides, or venture out a little and try the Breakfast Platter ($14) with soldiers, soft-boiled-egg for military-target dunking, a mini jar of muesli and a jumble of berries over baked ricotta. And somehow the carbo-heavy nature of the feta-stuffed Potato Rosti ($18), stacked with mushrooms, spinach, egg and hollandaise, proved no commonsense barrier to me also ordering the hand-cut chips, which are gorgeous (literally and flavour-wise): rosemary salt scattershot over thick wedges of Tasmanian russet potatoes, all tucked into an old-fashioned paper cone, so that each chip fans out on the wooden board it’s served on. (Unlike my uncivilised morning appearance, my food looks ultra-styled and magazine-worthy.) And if you’re feeling pretty right-on when you first get up, you can order a Breakfast Cocktail ($15-$18.50) – mimosa, espresso martini, bloody Mary or rhubarb fizz, take your alco-charged pick.

Incidentally, if you have a weakness for Orto Trading Co., you can vote for it in the Best Eats category of FBi Radio’s SMAC Awards, just announced today. Also shortlisted are ace places like The Dip and Fouratefive. Find out more at SMAC Awards.