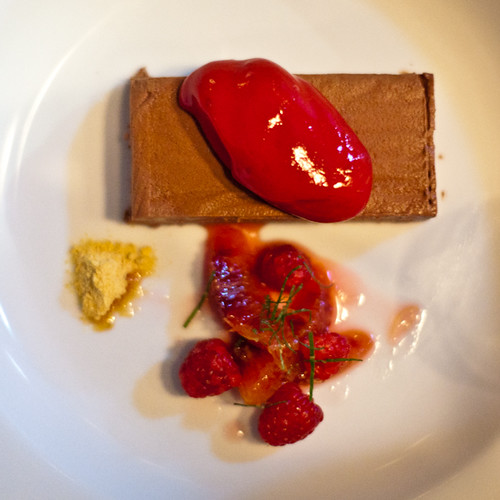 I found out about Avido, Paddington, through Six Degrees of Restaurant Separation. The interior here is partly the work of Matt Woods, the Newtown-based designer behind Bloodwood, known for its attention-snatching use of vivid colours, reclaimed textures and a love of sticking doors in unexpected places.

At Avido, the look is more subdued, with soft black chains by Sarah Parkes dangling among industrial lights and giant-sized buttons protruding from the wall. Like much of the restaurant, which just opened on Friday, it’s still a work-in-progress, but it still marks an intriguing starting point. 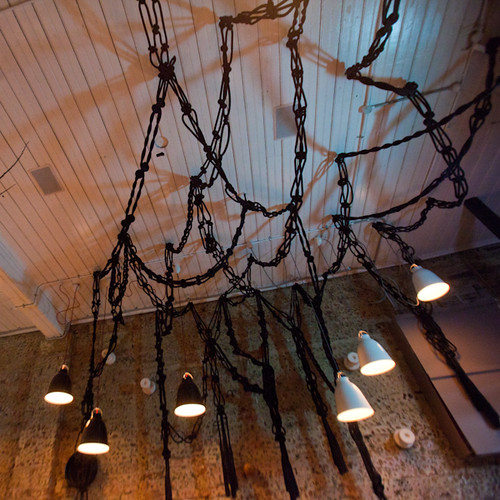 Avido translates as “greedy” in Italian, and the menu promises much you’d want to hoard for yourself. You can start with share plates – from garlicky hot Bagna Cauda with Spring Vegetables ($18) to Wagyu Bresaola with Truffled Celeriac Remoulade ($22) – but for vegetarians, the choice begins and ends with the Old Telegraph Road Cheese Board with Crackers, Pear Chutney & Guava Paste ($24).

There’s a bit more of a selection with the risottos, though, and while that rice-based dish is often oversalted glug – and an afterthought menu concession to vegos – the Prima Vera Risotto with Fine Herb Mascarpone ($15/$23) is a nice, simple-flavoured surprise, with the fennel adding bite to the medley of peas, carrots and other vegies in this light, creamy course. It’s exactly what you feel like in spring, even if the downpour outside scrambles the mood a little. The Parmesan tragic in me does wish that I’d had the Risi e Bisi with Reggiano ($15/$23) though – I guess that takes care of next-visit-ordering, though.

The Button Mushroom & Dandelion Salad ($18) comes out fighting in ways you don’t expect – there’s the lemony punch of the dressing, the semi-bitter leaves, the savoury snap of the Parmesan and a feistiness that brings it all together. 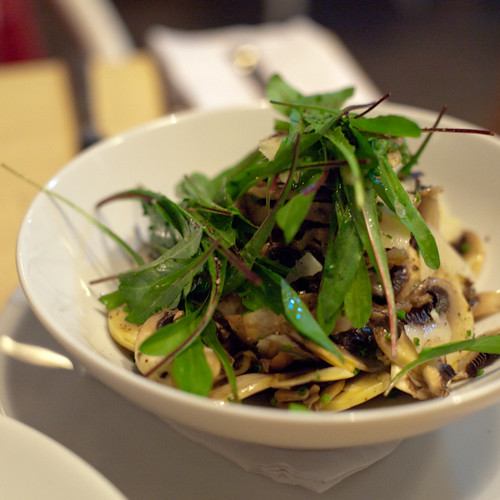 Will likes it almost as much as his Braised Shoulder of Spring Lamb ($28), which is interlaced with black cabbage and comes on a pebbly base of fregula.

My favourite thing of the night, though, is the Chocolate Parfait ($15), made of Italian Amedei, served with a bright-red dollop of raspberry, blood orange slices and an anthill of honeycomb. The raspberry has a tangy jolt that really spars well with the rich frozen chocolate. It’s a lovely curtain call for the night – and I bet it’s easily greater than anything at Max Brenner across the road.

Avido does have a few forgivable “just opened” imperfections (a tea order will come with advance warning of strainer-absence – but I don’t mind the odd leaf spelling out my fortune at the bottom of a cup, anyway). Still, it’s a nice addition to a strip of Oxford St that really is a black hole when it comes to dining. The food is pitched just right – simple, a little adventurous, but never pretentious – and surprisingly affordable for a part of town overrun with designer boutiques.

In summer, the ‘wine garden’ out the back will be ready, giving you more reasons (and standing room) to be greedy.