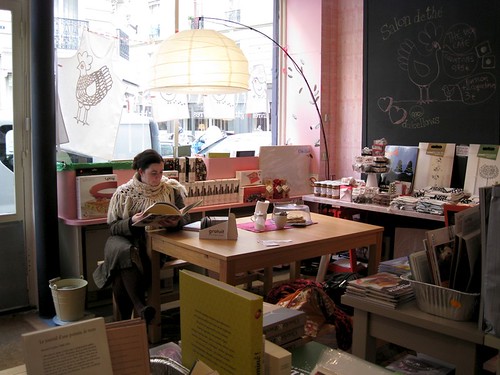 Here’s a short how-did-you-meet story that takes place over two years and involves a bookstore in Paris. In early 2008, I wore out my shoe-soles in that famous French city, tracking down the places I’d spent too much time over-researching before my holiday. One such spot was La Cocotte, a cute bookshop that is full of cookbooks and gourmet goodies, including sweets and tea that you can order from the chalkboard menu. That’s where I briefly met Rachel Khoo, who turned out to also be a food blogger (although far more professional than this happily amateur operation!), culinary expert and stylist. She’d relocated from England, and I remember enjoying our chat and hearing what it was like working in Paris (the reality was both great and not-so-great). 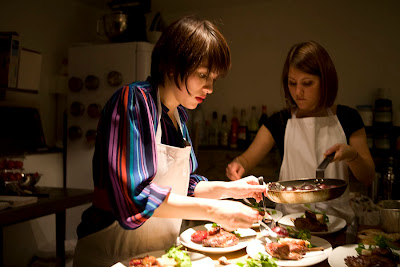 Skip to a few weeks ago, and I got an email from Francesca Unsworth, also a blogger and foodie expert from the UK, telling me about ‘Edible Tales’, a series of Australian-themed pop-up dinners she was doing with her friend – Rachel. They both had met at La Cocotte.

Together, they’ve had many culinary collaborations and adventures, including a spell where Francesca (Frankie) helped Rachel with the desserts for a Blogothèque pocket-sized party where Beirut performed and a menu highlight was Rachel’s Rose Ricotta Clouds with Strawberries. 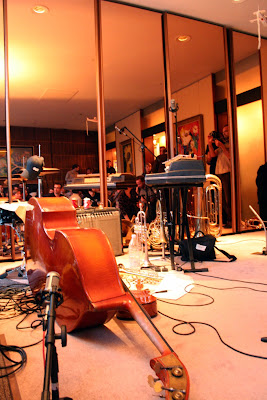 Setting up at the Beirut show

So here’s a little more information about Frankie and Rachel, and their upcoming ‘Edible Tales’ in Australia, as told in their own words.

You’re both Poms but you actually met in Paris. How did you first come across each other, and did it lead to lots of great dining/cooking adventures?

Frankie: Rachel and I met at La Cocotte, a cookery book store in the 11th arrondissement of Paris. Rachel was working there and I had popped along to see one of her cooking demos. We immediately hit it off; she had studied at Le Cordon Bleu and I was about to start out. As freelancers obsessed with food, this lead to lots of fantastic lunches and chef conventions. I worked on lots of Rachel’s projects with her as a sidekick – from an internet TV segment to pop-up dinners and parties.

Rachel: That was the beginning of lots of edible adventures: restaurants, markets, shops, picnics in Parisian parks, food festivals … Frankie was always the first on call for helping me out on all my culinary projects (my first event at the Loft, the School of Life Sunday sermon, cooking for the Blogothèque show Beirut. 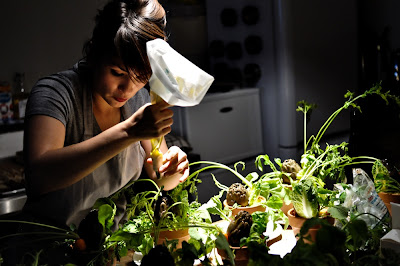 I like the sound of this Australian pop-up dinner you are organising and how you plan to play around with some traditional flavours. How did you first get the idea and, without giving away the entire menu, what can people expect?

Rachel: The idea initially came from the fact that we’re both new to Australia – it will be my first visit.

Frankie: We’ve been brainstorming what Australian cuisine is. So many of the flavours here pay homage to the waves of people that have migrated here, which led us to consider the historic origin of the food culture over here. You can expect some whimsical references to historic events in Australia as well as visual tributes to the local grub. 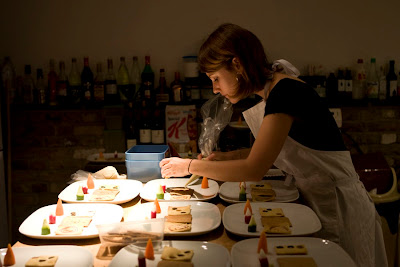 What kind of experimenting have you done? Did you hit any old cookbooks for research and, in organising this, have you been surprised by what Australians will eat?

Frankie: I headed to the Book Kitchen in Surry Hills and picked up some second hand books. A Look at Yesteryear: Early Australian Cooking by Valerie McKenzie & Joyce Allen and Australian Colonial Cooking by Richard Daunton-Fear & Penelope Vigar have been really interesting reads. I am always surprised by the success of meat pies in such a hot climate.

Rachel: My research started off with reading up on the general history of Australia and Aboriginal folklore. I then read One Continuous Picnic, which is on Australia’s culinary evolution. I then looked into the individual cuisines that have influenced Australia’s culinary scene. 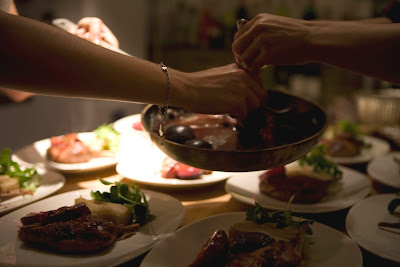 What’s drawn both of you to Australia? Do you think there’s much that distinguishes our local food scene from what’s happening in London or Paris?

Rachel: Well, to be honest the main reason I booked this trip was to see Frankie and soak up some heat and sun – although I can’t wait to have an authentic Australian barbecue. I’ll be interested to discover the differences during my stay.

Frankie: I was drawn to the sun, sea and the seafood – all of which has entirely lived up to my expectations. I am surprised by how many meals the Australians eat out, whether it is a piece of toast with avocado on the way to work, or a slap-up meal in the evening – the restaurants and cafes are busy at any hour! 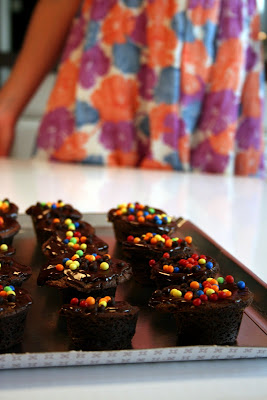 Rachel’s brownies for the Beirut show

Can you tell me about pop-up dinner experiences you’ve had? Best? Worst? Strangest?

Rachel: Hmmm, I don’t think I have one single best moment but what I enjoy the most is the end when all the dishes have gone as planned and people (who were strangers at the beginning) swap phone numbers or make plans to see each other again. The worst is when the guests don’t appreciate or see all the little details that have gone into putting a dinner together.

Frankie: This summer, I wanted to write a little less and cook a lot more, so I went and worked with Nuno Mendes, a chef in London with a super successful pop-up called The Loft. We would spend about 12 hours a day cooking in a home kitchen to produce his 12-course tasting menu, playing with the dehydrator and circulator bath in a home kitchen. It was so much fun. 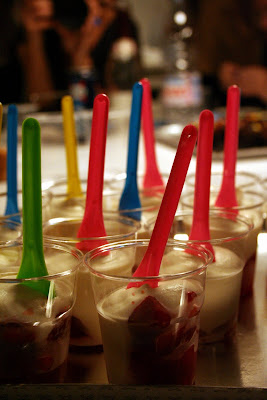 Desserts at the Beirut show

How about your cooking highlights/lowlights – what’s been the greatest meal you’ve ever pulled off? Most unusual? And the biggest cooking disaster?

Rachel: It may not be my greatest culinary achievement, but last year my first pop-up dinner at The Loft in London was definitely a highlight. I did everything, from creating the concept, the marketing/PR, the invitations and the cooking. It was not only nerve-wracking to cook for a whole bunch of strangers but cooking for a really talented chef such as Nuno Mendes and having him say he enjoyed the meal was a very BIG compliment.

Lowest – cooking for 20 with a waitress who was more interested in socialising then serving. I ended up running back and forth from the kitchen, as well as cooking.
Unusual – making edible black tapenade bugs and frozen pandan mousse frogs.
Disaster – stuffing bursting out of a meat roulade just before serving. I then stuffed it back into each slice. Luckily, nobody noticed!

Frankie: I’d probably say my my most stressful pop-up experience was at Nuno’s, preparing slow-cooked eggs in a circulator bath. We cooked them at 70 for 11 mins and they would fall apart in my hands when I opened them and there was no margin for error. I sometimes thought I could feel my heart about to jump out my chest – it was beating so fast. 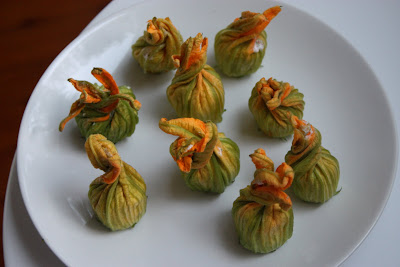 Beyond this pop-up dinner, will there be more events planned? What do you both have coming up?

Rachel: I’m in the process of writing a second cookery book (French Classics revisited) and a third one is in the works, too. I’m also hoping to collaborate with a new Parisian gallery this year to do some culinary events …

Frankie: So far, we have received heaps of interest for attending the dinners, so a second one is in the works. I am also putting together an expression of interest for a creative food project for the Design for Everyone program at Victoria’s State of Design in July.

For details on the current Edible Tales dinners in March, have a look here. To keep up with upcoming events, bookmark Frankie’s blog and Rachel’s site (which is currently being redone and will soon include a new blog).