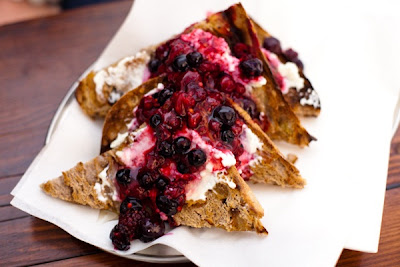 The folks behind the ever-popular Clipper in Glebe have opened a new cafe in Enmore.

A few weeks back, Sally tipped me off about its impending arrival, and with it slated to open near Lisa’s house, all of us had been on new-Clipper-watch for a while. It was meant to open last Monday, but the staff were still lugging bits of wood and were seemingly very much in handyman-mode when I had a look. 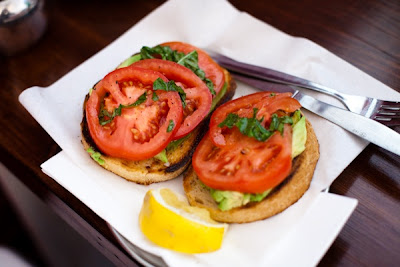 Then I saw Meagan on Friday and she had first-visit reports! She’d gone with Chris and Lisa and namely, “it was good, but it’s mainly sandwiches”. Which is as pithy and spot-on a report as you can get.

Bus Stop Espresso isn’t Clipper 2.0; if anything, it’s a smaller version aimed at a slightly older crowd in a quieter neighbourhood. The menu is simpler and slimmed-down – it needs to be, as all food is prepared on a micro kitchen that doubles as a service counter – and the drawing-crowded chalkboard, scattering of toys and children’s seats tells you this aims for less of a student/young hipster following and more of a family one. 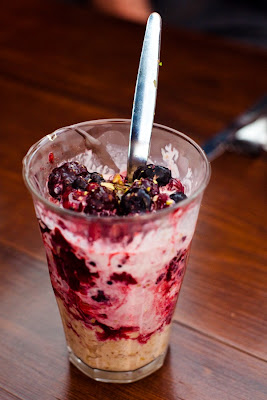 Also, there are no bikes on the wall or issues of Monocle; just some simple wood-crate displays, an awesomely old-looking gramophone and a less-awesome painting of cranky dogs that triggered much head-scratching around our table (let’s put it this way, it’s not a painting that will ever inspire an art heist).

The name – Bus Stop Espresso – not only signals its location but plays on the lighting of the eatery; everytime a 426 rolls past, everyone sits up and wonders if someone’s playing with the switches and dimmers; it just turns out that buses have an amazing, killjoy ability to block out sunlight. Just temporarily, luckily. 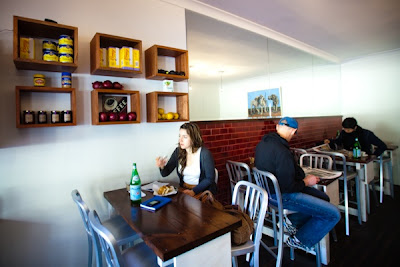 Yes, but what about the food? There are a few similarities with the Clipper menu – such as the Arabian-style Muesli with Pistachioes and Berries ($7.50), which Will instantly pronounced awesome, and the Toasted Banana Bread With Berries, Ricotta & Honey, which Kate did a bit of carb-trading on, swapping the slices for crisp Turkish fruit loaf instead.

Because of the cafe’s basic set-up, all orders are toasty or crusty or hand-clutchable. As Meagan said, it’s mainly sandwiches. You won’t get the inventive hot breakfasts that Clipper can deliver, but there’s Avocado, Tomato and Basil on Sourdough ($8.50) (with an unexpected but lively, likeable dose of Thai basil) and Turkish Raisin Bread, while the lunch menu covers sandwich fillings such as Basil Pesto, Bocconcini and Tomato ($8).

And if you haven’t figured from the photos, there’s definitely a berry-heavy theme throughout. 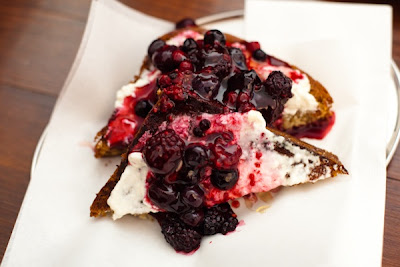 The minimal start-up menu meant that we could only ask for coffee or tea (I had a chai with a sweet, fragrant kick), but juices will be added soon. Also, part of our order didn’t actually arrive, which I’d like to think was just a case of understandable just-opened fumbles rather than anything endemic.) 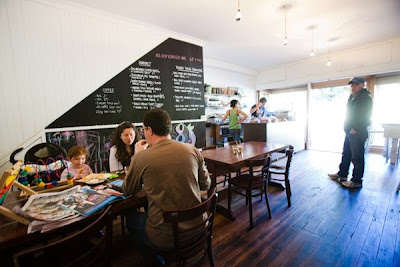 So, it’s not the second coming of Clipper but Bus Stop Espresso is a much-needed option on a part of Enmore Road that is rather cafe-empty. It’s also a few blocks from Enmore Park, which makes the highly portable menu a nice accessory for a sunny laze in the grass. (Note, if you do that, make sure you grab some cups of ice cream from nearby Serendipity, the green tea and mangoes & cream flavours make you glad the weather is warming up.) Also extra handy if you catch the 426. Or happen to live where Lisa does.