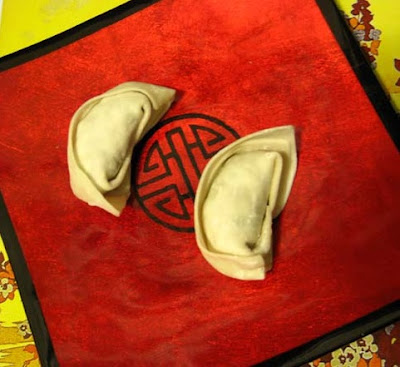 Eating out near home is always double-edged. Your cooking conscience guilts you about how you should’ve saved money by making something in your own kitchen. The lazy-ass part of you, meanwhile, is happy not to be scrubbing plates and de-clogging the sink strainer (ew).

I live behind a “dumpling belt” of restaurants – great if you have an unending love for steamed Chinese pastry bundles, but there’s a limit to how much one can live on such a mono-diet. So I don’t eat out in my neighbourhood a lot.

I do have a love-hate relationship with one nearby eatery though – Shanghai Dumpling.

The first time I went, they “ran out” of vegie dumplings (at 3pm on a Saturday) and only had four left. (There’s usually eight in a serve.) When I asked if I could have more noodles to fill up the bowl, they said nup and still charged the same amount for half the dish.

Usually, this kind of lame treatment leads you to doing an over-the-top “taking my business elsewhere” huff and puff.

The peskiest thing though, was how much I liked their vegie dumplings! It reminded me of being in primary school, where you can find someone fumingly annoying while having some weirdly big crush on them at the same time. So, here I was, with a dumpling crush on this envelope of diced shiitake and enoki mushrooms (nicely perked up by the sharp bite of herbs). And soon I was scheming about our next full-serve encounter.

This turned out to be a failure – when next at Shanghai Dumpling, they had no vegie dumplings, full stop. I wondered if they should change their sign to “Occasional Shanghai Dumpling” or “Shanghai Dumpling Lottery”. Now, when eateries run out of something you want to order, they try to menu-placate you by suggesting something else but they just smiled and waited for me to vacate the shop, still hungry.

So, now the place was firmly in my bad books but I still couldn’t shake my crush on their dumplings!

Yesterday, I rang ahead just to check their vegie dumpling stockpile. Status: not completely diminished! Also, I learned you could get them fresh and uncooked for a discounted price. This meant I could shake off the money-saving guilt of getting takeaway while still getting to feel all kitchen-uprighteous about cooking something at home.And overload the bowl with noodles aplenty (with no noodle scrooge to stop me from getting my fill!). All pluses – although let’s conveniently avoid mention of the sink strainer.