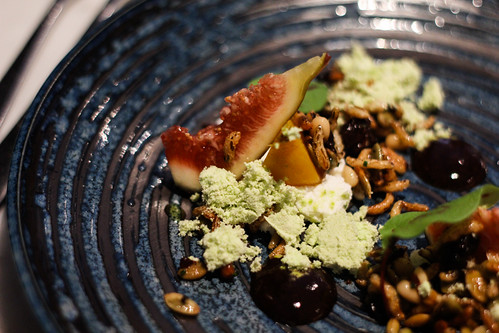 If you did an ID check on Assiette in Surry Hills, you’ll notice it’s not there anymore. It’s recently been recast as Albion Street Kitchen, shifting its personality from high-end restaurant to something more casual. 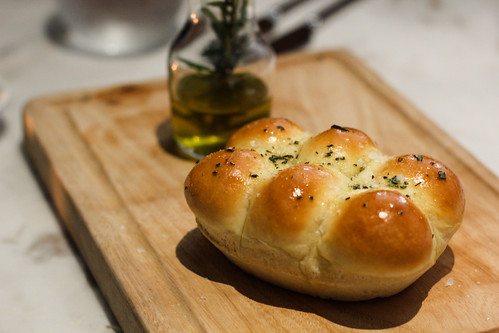 It’s not quite as laidback as the eat-with-your-hands mess and joy of Warren Turnbull’s other venture, Mexico, but it’s more relaxed than its hatted predecessor – where the food was outstanding, but I found the service somewhat starchy and stiff. The wait staff at Albion Street Kitchen employs a good-humoured approach that’s many degrees warmer and likeble. They’ll joke with you as they size up whether you really are done with your dessert plate or broker peace deals between ‘warring’ diners (OK, slight conflict exaggeration – Will wanted chips, I didn’t; the waitress suggested he get them anyway, but I should be contractually obliged to eat at least three). 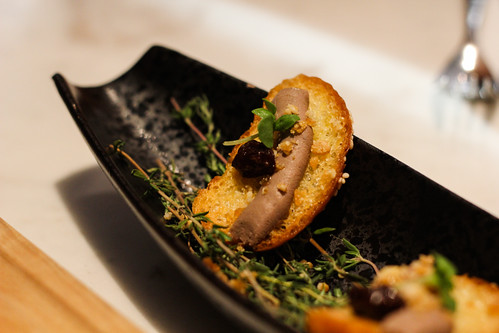 Despite the change from Assiette, some fine-dining touches remain: you still are treated to an amuse-bouche and pre-dessert and the milk bread that opens your meal is basically a delicious gateway to consuming as much of the accompanying rosemary-infused olive oil as possible.

And despite the casual slant, there are lot of sophisticated culinary tricks on display. ‘Common’ dishes have been reverse-engineered into clever experiments: ‘cheese on toast’, something you might usually eat over the sink in your PJs (it’s a classic “phew, glad no one can see me like this” snack, after all), gets souped up with truffle shavings, a pillowy meltdown of cheddar from Tasmania’s Pyengana Dairy Company and scatterings of asparagus and Pedro Ximenez. The old beet and goat’s cheese salad gets reborn with “cereal”: think puffed rice, pepitas, raisins – our waitress jokingly calls it a gourmet ‘Just Right’. It’s a lucky dip of fun-filled flavours and bracing textures. The dish is dusted through with a crunchy green powder that we had trouble pinning in an ingredient line-up. So we asked and one waitress dryly quipped that they just called it “basil fluff”, but admitted they could give it a more fancy name. Basil crumb will do. Pork Belly ($30) rolls with a surprising crew, too: gingerbread spice and salted caramel apple appear next to the more typical veg stand-in of heirloom carrots. 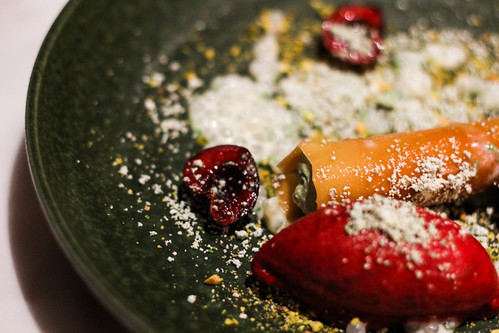 There’s also a mac and cheese that comes with grilled vegetables so unusually flat and charred, they look like they’ve been stretched into zebra rugs. I notice that on Albion Street Kitchen’s Facebook, this is being billed as a “lighter” dish. It’s fun – a beehive-like terrine of macaroni, with Parmesan cream, braised kale and ‘steamrolled’ vegies; and maybe it’s what you’re looking for if you want a strong punch of salt and richness, but it’s definitely not an airy, dainty number. In fact, it was too much of a heavy-hitter for me.

At Albion Street Kitchen, you also have the novelty of ordering “cannelloni” for dessert, which comes ‘sauced’ with pistachio mousse and cherry sorbet ($15). On the night we went, this was so similar to the pre-dessert; the flavour overlap made the cannelloni seem somewhat redundant. Your gravitational pull should go towards the Honeycomb Parfait with Fennel Custard and Pinenut Praline ($15) that Myffy Rigby rightly cheerleads for in her Time Out review. It is ridiculously good and a must-have. Everyone at your table is a winner if they’re armed with a spoon and lightning reflexes and this dessert is within easy-reach access.

In fact, you could say that for quite a few things on the menu.