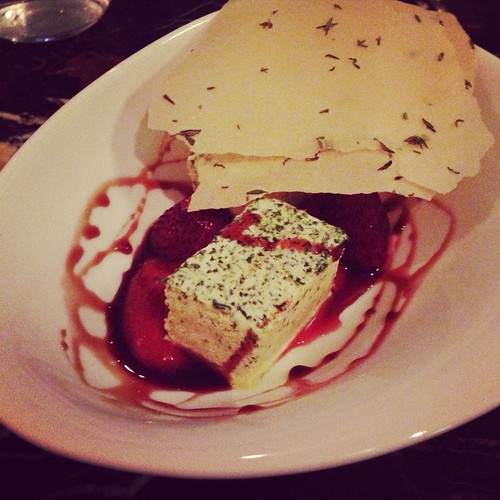 Adding to the outbreak of great new places in the Newtown/Enmore area is Osteria di Russo & Russo, which just opened on Enmore Road. The laziest of glances would suggest that it’s just another Italian restaurant, but this establishment is full of take-you-by-surprise qualities.

The endearingly old-school interiors have a time-warp feel, but the menu is far from tradition-heavy: it’s full of updated, not-so-common touches. The classic Crostata ($16) is reworked into a brilliant dessert, with each element isolated to maximise its awesomeness: the ‘pastry’ is a polenta disc, the fruit includes gorgeously slow-poached quince and a school-lunch-evoking quince roll-up, the almond is transformed into ice-cream and there’s an airy puff of zabaglione to complete it all.

Also excellent is a Semifreddo ($16) studded through with thyme, topped with a thyme-threaded wafer and slicked through with strawberry and aged balsamic. There’s also a cheese plate offering reimagined as a dessert and a meal-ending take on Ferrero Rocher as well. 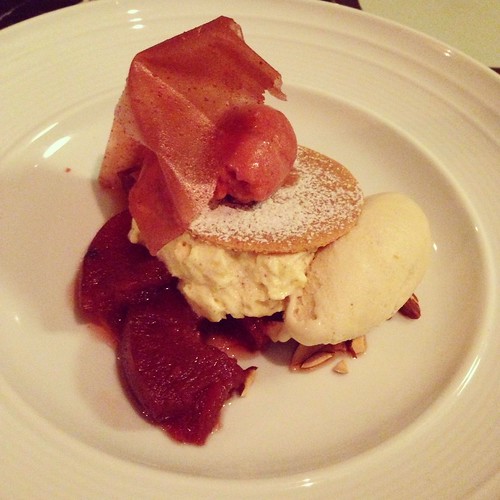 Savoury dishes are worthwhile, too. Will was impressed by his entree, which takes pickled vegetables and bagna cauda and adds a salty hit of Wagyu Bresaola ($16); also great – his dish of Chargrilled Hanger Steak ($26), teamed with agrodolce dressing, chargrilled eggplant puree, leek and sculptural shards of radicchio.

There’s only one vegetarian course (a Risotto with Prosecco, Zucchini Flower and Smoked Mozzarella), but if you ask nicely, you could end up with some excellent adaptations of menu standards, such as Piccolo Fritto ($18), a “little fry” with big flavour, thanks to the ultra-crisp vegies that get in a dust-up with chilli, almonds and a peppy salsa rossa. Any pasta with a good dose of melted cheese is hard to defend against – the Cazzellitti ($24) with pine and grey ghost mushrooms is laced through with smoked mozzarella and will work through your weak points. It’s a lovely dish to get acquainted with on a cold evening. It’s even nicer when you learn that Marc, who runs the restaurant with his father (hence the “Russo & Russo” name-checking in the business’s title) is spending the next day, after an early battle with the alarm clock, foraging for the mushrooms in Oberon. 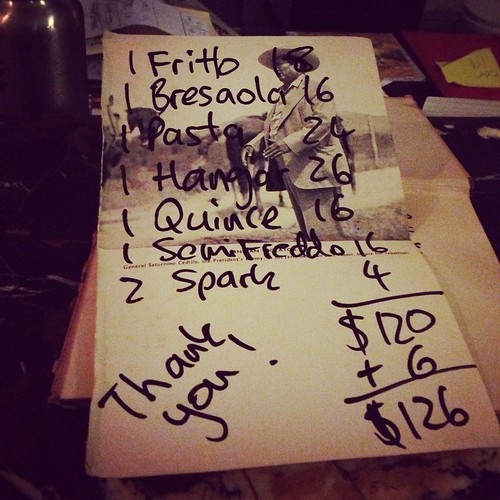 Marc cuts a very likeable figure at this eatery, which really resounds with its small, family feel. He kindly answers my rapidfire, ultra-nosey questions; is very good on the service front, and also picks out the fine soundtracks. Enjoying the food here, as the turntable was spinning Galaxie 500’s classic On Fire from end to end, was one of the utter highlights of my weekend. I really like this place. Of course, hugely working in its favour is the talented Jason Saxby, whose overachieving CV includes time at Pilu, The Bridge Room, The Ledbury, Per Se and Quay (where he landed the Josephine Pignolet Young Chef of the Year Award).

So I’m glad that Alex Vitlin, who has been doing great things at Two Thousand since forever, clued us all onto Osteria di Russo & Russo when he posted a pic on Instagram just two days after it opened. Like he says, it’s a “top little spot” and is a fine addition to Enmore Road (along with Shenkin Kitchen, which recently opened, and Hartsyard, which has been feeding us well for the last year. Hard to forget mainstay Cow and Moon, too). And of course, Mary’s in nearby Newtown has been hotly pursued by diners and bargoers since it started slinging A-grade burgers a few weeks ago.

Incidentally, the menus and bills at Osteria di Russo & Russo are conveyed through secondhand books – in use are excellent, age-worn titles such as the Handbook of Structural Timber (great if you want to know about typical gussets or strap and pin joints), a bio textbook that includes the life history of the amoeba and an old copy of Modern Sex Life. I guess the latter is a pretty handy dinner-table conversation starter. There’s definitely a lot that’s worth talking about at Osteria di Russo & Russo.