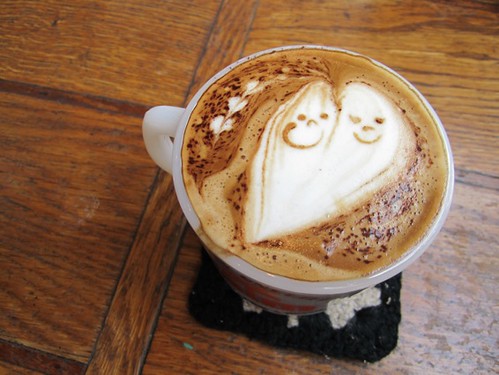 I went to Enjoy! Cafe in search of a bear. Instead, I got a Siamese heart. And a snowman.

Here, customising your coffee goes beyond just tapping in the odd packet of sugar; instead, you can request a drawing in your coffee: a rabbit, leaf or not-quite-scientific girl (really, a charming loveheart with a female face). If you want more portraiture with your brew, you can walk to nearby Cafe Jojo, another Amy discovery, where you can sip on a Panda-ccino or order Miyazaki’s lovable Totoro illustrated from frothed milk. 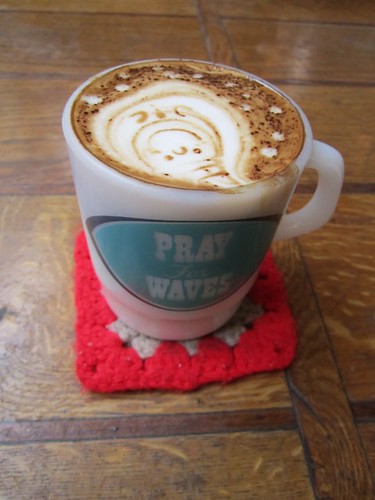 Enjoy! Cafe isn’t just about caffeine – although its unending collection of mugs would suggest otherwise. You can also get a Toast ‘Setto’, a jumbo-thick slice of bread with cheese that, in melting, still obeys the rules of geometry, as well as a few sidekicks (such as a scraggly salad dressed in all-magic Japanese mayo), and minus ham, if you’re vego. It’s not super-serious food, but I like how the Japanese remix a Western breakfast, giving it some eccentric beats. 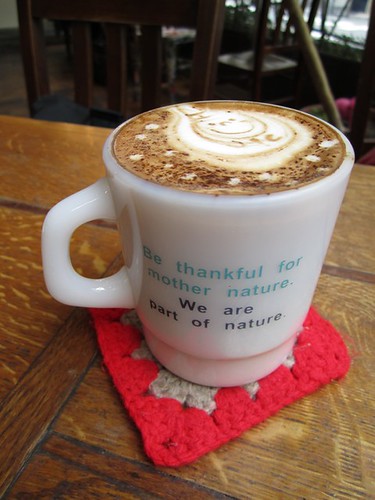 And among the Snoopy figurines, the selection of cheery, unironic mugs (how great is the “Pray For Waves” cup?) and other oddities (like a random pink toy elephant keeping a pot plant happy), there’s a sign in the cafe that simply says, with untameable enthusiasm: “Now! I am happy!” Where else, but at a place called Enjoy!? 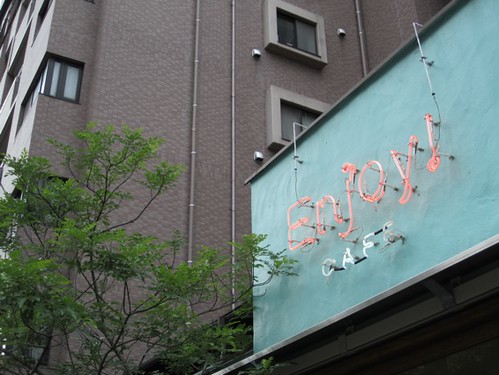 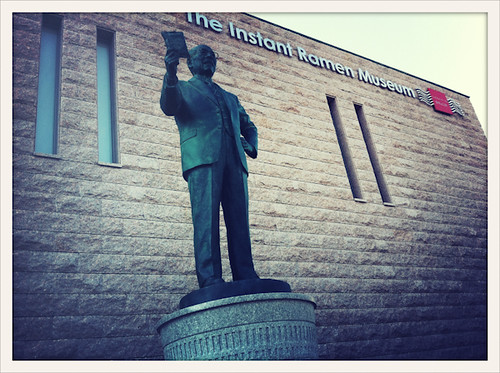 In 1958 – to the benefit of future time-poor students everywhere – Momofuku Ando invented instant ramen in his backyard shack in Osaka. 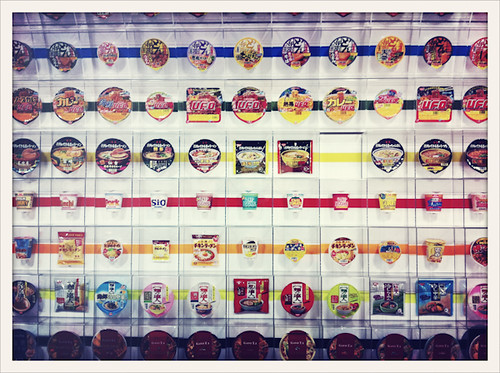 Given the world-wide popularity of these noodles (85.7 billion packets were tipped into bowls and slurped up in 2007), there’s also a museum dedicated to his creation. 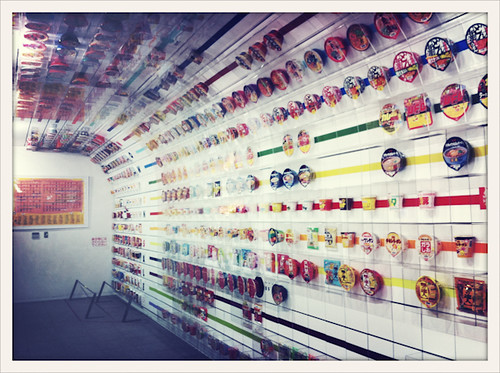 It’s located in Ikeda, the suburb where Momofuku Ando made his discovery. And from the moment you see the statue of him, posed atop an instant noodle cup, you know that this isn’t a staid, overly academic institution but a fun, semi-goofy spot to visit. 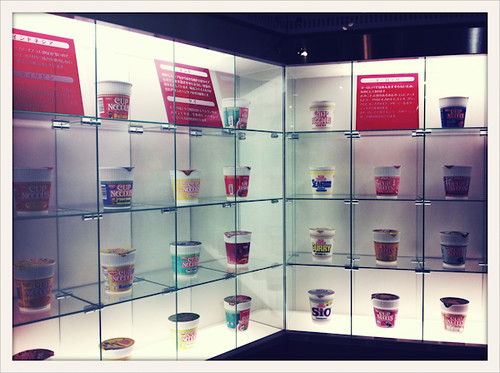 Inside, there’s a theatre in the shape of a giant noodle bowl, a tunnel of ramen (displaying noodle products all the way back to the ’50s), an exhibition of “Instant Noodles of the World” (Germany, Mexico and India, reprazent), Space Ram (a replica of the stratosphere-busting ramen that was deployed on the Discovery space shuttle in July, 2005) and, most importantly, a section dedicated to making your own instant noodles. 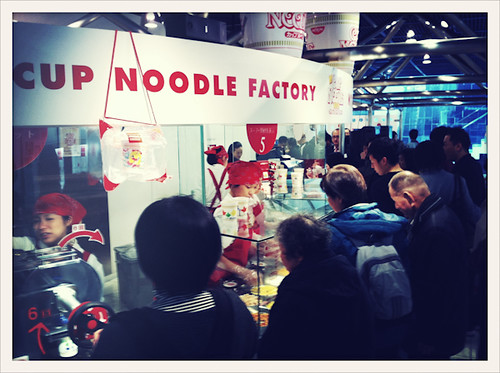 For 300 yen, you get to create your own cup of ready-boil ramen to take home. First, you wash your hands in some hi-tech mist that reaffirms all your feelings about how advanced Japan is. Then you get a styrofoam noodle cup to decorate and personalise (which reaffirms all your feelings about how unadvanced your drawing/colouring-in skills are). Then you get to hand-crank dried ramen out of the “Noodle Shooter” before choosing your four toppings and soup base. 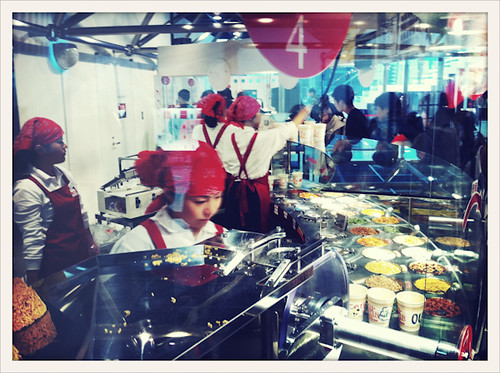 Both Will and I started with a Curry soup base and, curious as I was about selecting cheese (!) as a topping for instant noodles, I stuck to the less experimental-sounding garlic chips, egg, asparagus and corn. 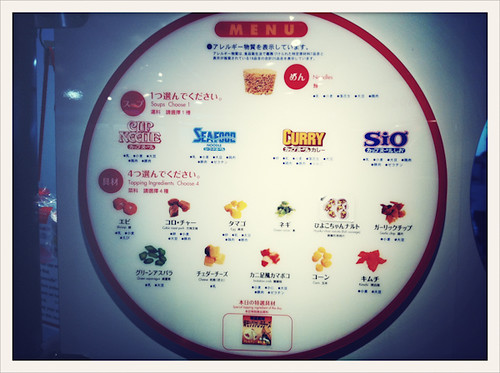 Will, like a lot of people, had perfected his list of Best Four Toppings To Choose only to do a topping reshuffle when he saw the discs stamped with super-cute chickens (the cartoon is the mascot of Nissin, Momofuku Ando’s instant ramen brand). But don’t let your eyes hoodwink you, this topping flavour is actually seafood …! 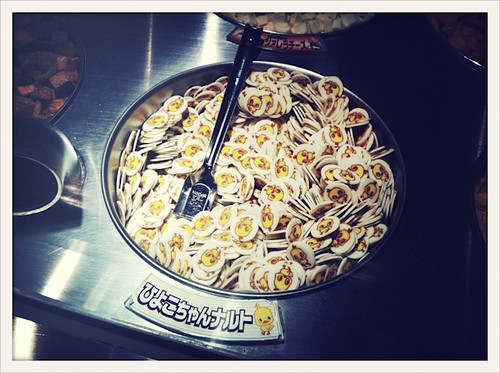 After instructing the attendants on your flavour choices, your cup is then sealed, shrink-wrapped and then placed in a bag which you air-pump into a massive cushion to prevent the tiniest possibility that you might bump your noodle cup, causing an instant ramen tragedy of having to perhaps work your chopsticks 4 per cent harder in fishing out strands that have snapped off the main noodle cluster. I’m pretty sure this overprotective packaging could also double as an airbag in emergency situations. 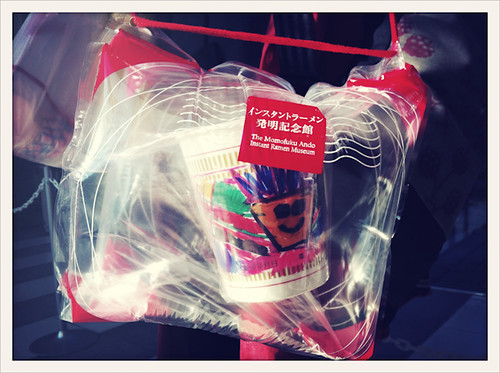 Another highlight of the museum was the cafe which, at first glance, looked like an uninviting room furnished with nothing more than tables and vending machines, ambiently fed with an audio loop of Nissin jingles and (inexplicably) Bon Jovi. It turned out that the machines were stacked with limited-edition and hard-to-get packs of instant noodles, which was why all the locals in front of us were frenziedly buying up. 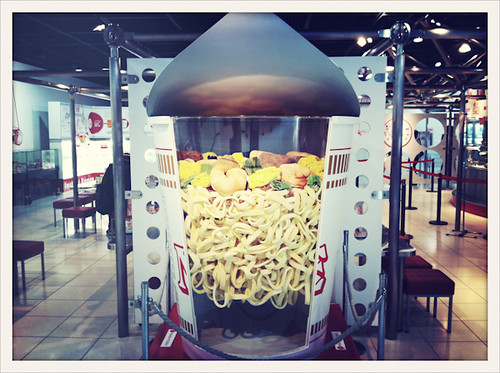 Even though packaged ramen is self-serve by definition, I loved how – once you slotted in your yen and your styrofoam cup tumbled down the machine for collection – the staff actually came over to your table and poured the boiling water into your noodles and instructed you, precisely, to wait “three minutes”. 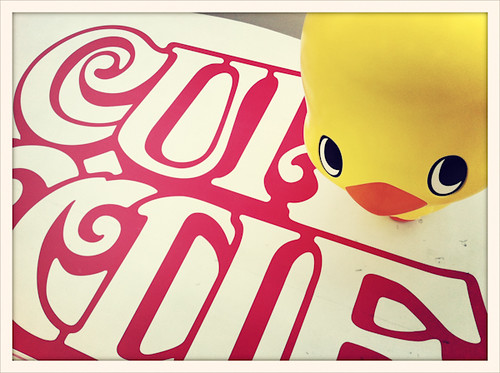 I bought “Udon de Sky”, which apparently is a pun (supposedly it sounds like “is it udon?” in Japanese) and was first served to “executive class” passengers on Japan Airlines back in 1992. Its in-flight history is best illustrated when you peel back the lid and discover the noodles are topped with miniature aeroplanes. 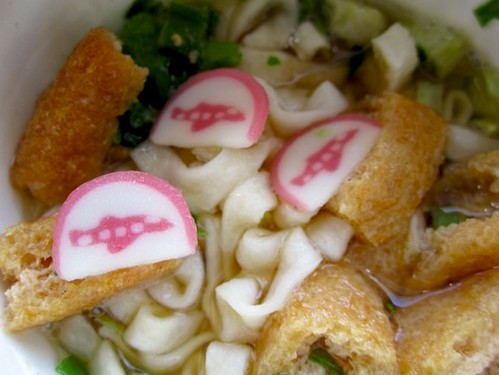 Instant Ramen Museum, 8-25 Masumicho Ikeda, Osaka, click here for a map. The museum is a half-hour train ride from Umeda, on the Hankyu train line. Admission is free. There are also workshops where you can make noodles from scratch (it’s full of kids and looks like the set of Junior Masterchef), but you need to book ahead. Visit the website for more details. 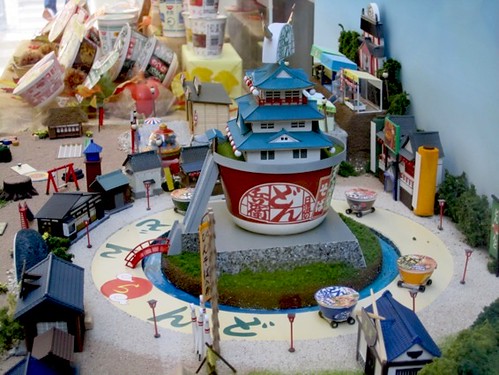