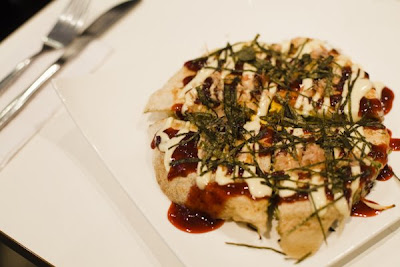 I remember once being served Okonomiyaki by a waitress named ‘Sushi Susan’ – the Japanese pancake came accompanied by a small ‘pirate ship’ full of food. Around the table, we sliced up and shared the portions as a giant papier-mache squid hung above, like a marine chandelier.

Even if this hadn’t taken place in an eccentric Japanese restaurant in Canada, I think I’d still remember it, because I can single out every instance I’ve had okonomiyaki. It seems to be a menu-shy dish, it’s never listed as much as I’d like.

Luckily, it turns out you can get okonomiyaki for lunch at Cafe Ish (another long-time Sydney favourite that I blogged about last year; its highly original Japanese-meets-Australian cafe food is worth the return visits).

Cafe Ish’s version is a crusty, thick stack of cabbage-and-shallot-embedded goodness, topped with shredded nori, wasabi dijonnaise and plum sauce – a winter-perfect mix that makes me instantly declare, “more please”. You can get it like this for $11, or pile on extras (bacon & tasty cheese; salmon & organic feta).

There’s no pirate ship in sight but I think even Sushi Susan could consider crossing the sea (with her papier mache squid) for this one. Another nice okonomiyaki memory to bank away – and not the last one, hopefully.