When Mark from China Heights gallery claimed Cafe Ish as one of his favourites on my list blog, that’s when the place first tripped off my worth-registering-in-brain mechanism.

I did a bit more online sleuthing and discovered it was a cafe that specialised in Australian food with a Japanese twist (!) and it flaunted an average of 9.2/10 on Eatability. The more I read about Cafe Ish, the more it zoomed towards the top of my Must-Visit list.

So with all my mental compass points magnetised in the one direction – I had to find this cafe and try it out.

It’s a tiny joint halfway up the hill that is Albion Street in Surry Hills. And in such a snug place, you quickly notice that the staff (Josh and Ai) seem to comfortably know all of their customers, chatting to them like they know their back story and greeting and waving people goodbye by name – something that ain’t a bad thing about a cafe.

Sure, when first reading about the menu’s “Australian with a dash of Japanese” leanings, I was completely stumped about how it could be done. But it becomes a lot clearer once you flip through the menu (which is stamped with a cute logo resembling a coffee cup stain and filed under “Ish” headings – “Sweet – ish”, “Lunch -ish”, “Sandw -ish” and so on. You can even have your free range eggs “Hippie-ish” or “Benedict-ish” ). When you see listed offerings such as Tempura Crystal Bay Prawns with Green Salad and Desert Lime Chilli Sauce ($16) and Byron Bay Berkshire Ham, Organic Tasty Cheese, Wasabi Dijonaise and Tomatoes on Damper ($9.50) though, the idea of mashing up Oz and Japanese food doesn’t seem so head-scratchingly crazy. In fact, it actually sounds like a good, adventurous pairing of two contrasting cuisine styles. 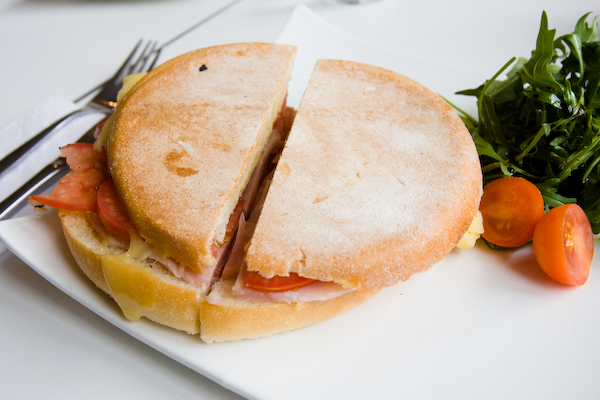 There is also a colourful sprinkling of local flavours through the menu – think lemon myrtle, wattleseed, bush tomato balsamic, macadamia butter, damper bread, wild rosella and apple relish, Byron Bay Berkshire ham and a hell of a lot of crocodile and kangaroo. It makes me wonder – despite all the backpatting about using more local produce – why it’s so rare to see a cafe menu embrace native ingredients so thoroughly. Lemon myrtle and wattleseed are especially inviting and lively additions to any dish, so it is nice to see Cafe Ish reinvent classic food with these Australian flourishes. Under this locally inspired direction, even plain ole Weet Bix sounds exciting! It comes served with steamed organic milk and red gum honey ($8). 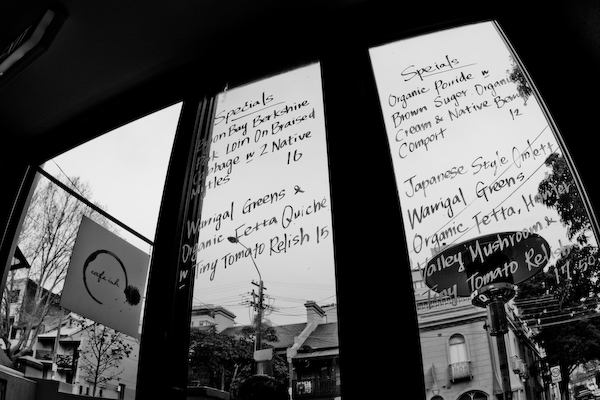 I end up swayed by one of the specials scrawled on the window – the Japanese style Omelette with Warrigal Greens, Organic Fetta, Hunter Valley Mushroom and Tiny Tomato Relish ($17.50), which is a little exxy but a fine and intriguing feed. (I especially like the sour burst of relish.) I also like how the meals are served with a palette-pretty quadruple-scoop of salt: grey-black Murray River salt, light-yellow citric salt, red chilli salt and char-black volcanic salt. 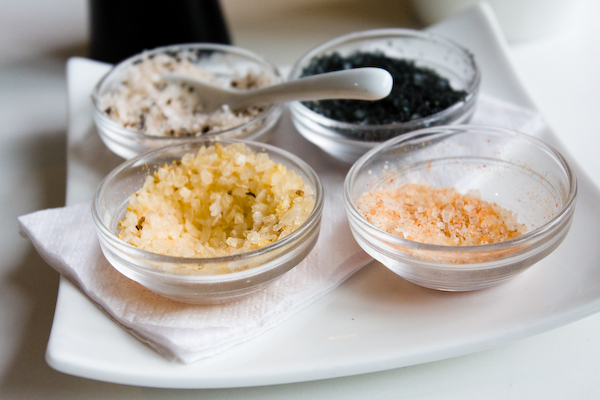 Even the drinks have a geographically intriguing twist: there are native takes on traditional teas, with Sydney Breakfast (actual menu description: “Hello?! We are not in England! We are in Sydney now! Let’s wake up with Sydney breakfast! Full bodied orthodox leaf tea with hint of bergamot”) and Australian Green (“green tea, lemon myrtle, strawberry gum, spearmint and camomile – you’ll be surprised that green tea could be this fancy!”), as well as ‘remixed’ Japanese varieties (Gorgeous Geisha is “green tea with the flavour of strawberry and cream”). All are $4 and come in a cute teapot that rests perfectly on top of a cup. As wildly inventive as the Australian green tea sounded, I have to admit all those extra ingredients felt a little wallflowerish and hard-to-detect. I did, however, love what Will ordered: Turkish Apple (“so apple! Just like apple pie in a cup” says the menu). I can’t say it really tastes like baked-pastry goodness, but it does have this low-humming apple-liciousness, that’s for sure.

In line with their Aus theme, their signature coffee is the Wattle Maccacino ($3.80/$4.30), which teams up the roasted sweetness of wattleseed with macadamia nuttiness. You can get an iced one too ($4.50).

I couldn’t go past their “Sweet – ish” menu and went for the fully-flagging-myself-as-a-pig option, Waffle with Wattle-Macadamia Ice Cream, Stewed Muscatels and Riberries with Lindt chocolate sauce ($15). I confess I bluffed my way through ordering it and was too embarrassed to admit I had no idea what riberries were – but I was won over by their strange clove-like taste. It turns out they’re a native ingredient and a curious contrast to the rich load of choc, waffle and wrinkly-sweet muscatels. The ice cream played more of a cameo role to these attention-yanking flavours. 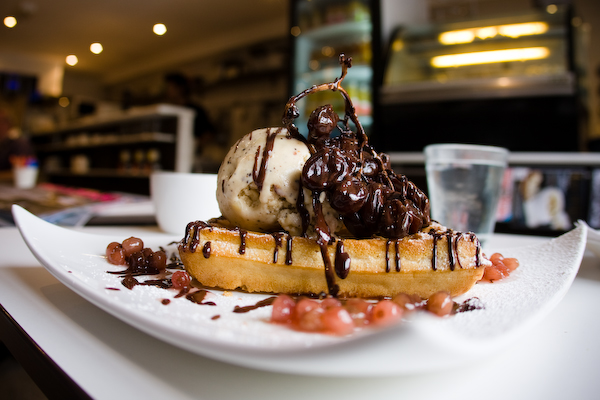 Will went for something less in-your-face, choosing the subtle Vanilla Risotto with Warm Ume Shu Poached Fruits ($13), a cleaner alternative to my napkin-messing choice.

After our monster appetites, we were pretty much done for the rest of the day (despite eating before midday!). I could only manage some fruit toast for dinner. It might seem like what we ate could last us a lifetime, but I’m going back to Cafe Ish for lunch tomorrow. Because it’s more-ish. And clever-ish. And must-go-back-ish.*

*Except that I discover the cafe is cruelly closed for the weekend thanks to the road being blocked off with the Pope being in town! I am now officially bah humbug about World Youth Day. (No “ish” about it.)